The Yankees bullpen was nothing short of great this year, despite some noteworthy implosions and the occasionally questionable usage patterns. It ranked first in baseball in fWAR by a full win, and also paced the league in K% and WPA. And, even in the face of the occasional meltdown, they ranked second-to-last in FanGraphs meltdown metric – meaning those rough patches happened less frequently than all but one other team.

That, of course, does not mean that they were without weak links in the chain. Let’s take a look at their two worst relievers this year, beginning with:

On April 23, the Yankees acquired Cole from the Nationals for cash considerations. It was essentially a nothing trade, with an eye towards depth rather than tangible improvements to the front end of the bullpen. There was some semblance of a notion that Cole could be more than that, given that he had only just turned 26, and was only a few years removed from being one of the 50 or so best prospects in baseball. His 5.32 ERA in 110.0 big league innings left a great deal to be desired – but, for cash and cash alone, it was a worthwhile move regardless of expectations.

And Cole kicked-off his Yankees career in rather grand fashion, tossing five straight scoreless outings, and pitching to the following line: 8.2 IP, 4 H, 0 R, 6 BB, 12 K. It was notable that those five appearances came over a four week span, so it wasn’t as though he was working regularly; moreover, the average leverage index was 0.73, which means that those appearances were predominantly low-pressure. But, even so, it seemed that Brian Cashman may’ve found another weapon for the bullpen.

Cole took his first lumps as a Yankee on May 28, allowing a run in 2.1 IP against the Astros. That, however, represented his worst appearance in his first three months with the team (albeit in just 13 games in that span). In that time Cole pitched to a 0.83 ERA in 21.2 IP, allowing just 18 base-runners while striking out 28. And, as a testament to his effectiveness, he did not allow a single one of his five inherited runners to score.

Was there something tangible here to tell us that he might be for real? Yes, actually: the Yankees anti-fastball approach. 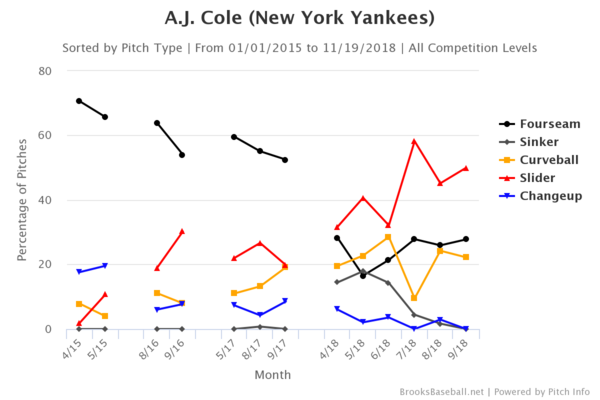 As a member of the Nationals, Cole was throwing between 52 and 70% fastballs; with the Yankees, he threw 25.4% overall. He primarily replaced the fastball with sliders, and that made sense, given that (as per BrooksBaseball) his fastball was his worst pitch, and the slider his best. And it paid huge dividends for several month.

And then Cole fell apart.

What was the reason for this backslide? It’s not entirely clear. His velocity was steady, and batters continued to struggle against his slider even as he fell apart. It may’ve just been a matter of regression to the mean combined with the league learning to simply avoid his slider.

Cole ended the Bronx portion of his season with a 4.26 ERA in 38.0 ERA, which works out to a slightly above-average 103 ERA+. He still has five years of team control remaining, as per Baseball-Reference; he’s out of options, though, so he’d have to pass through waivers if the Yankees wanted to send him down. I could see him remaining with the organization as a depth arm, but there’s a good chance he’s done in pinstripes.

The Yankees acquired Kahnle from the White Sox a couple of weeks before the 2017 trade deadline, along with Todd Frazier and David Robertson. The latter two had more name value, but Kahnle was thought to be the the biggest and best chip in the deal. It’s not hard to see why, either; he was 27 at the time, came with four-plus seasons of team control remaining, and had been utterly dominant since first suiting up with the South Siders in 2017.

Kahnle was pretty darn good with the Yankees in 2017, pitching to a 2.70 ERA (169 ERA+) in 26.2 IP, and continuing to mow down batters to the tune of a 31.3% strikeout rate. His walk rate spiked from 5.0% in Chicago to 8.7% in the Bronx, which was somewhat disconcerting – but it was still league-average, and it didn’t hinder his overall effectiveness. All signs pointed to Kahnle being a true weapon in the late innings.

And then Kahnle opened the season with a stark reduction in his velocity, and limped out to a 6.14 ERA in his first six appearances. There was nothing promising about those outings, either; I suppose you could point to his 9 strikeouts in 7.1 IP, but those were countered by 8 walks, and it looked like the pre-Chicago version of Kahnle was back. It was so bothersome that there was a collective sigh of relief when he hit the DL with tendinitis on April 17, as it meant that there was an underlying cause for his awfulness beyond him … well … being awful.

Kahnle made a couple of tune-up appearances in the minors in late May, and didn’t look too good, allowing five hits (including a home run) and two runs in three innings. There were reports that his velocity was still down, but he nevertheless rejoined the team and returned to big league action on May 26. He faced-off against the Angels that day, and allowed two hits, two walks, and four runs in 0.2 IP. His fastball velocity was back above 96 MPH, but he looked bad. And he was back in the minors a week later.

Kahnle spent all of June and July in Triple-A, and he was effective, pitching to a 2.18 ERA and striking out 31 (against 8 walks) in 20.2 IP. The velocity was still down in the 95-96 range, instead of the 98ish that we saw in 2017, but he was getting outs, and that’s what matters. His free agency was also delayed for a year, which is a fringe benefit (assuming that he’s worth having around).

The now 29-year-old returned to the Yankees for good in mid-August, but the struggles continued. He appeared in fifteen games from that point forward, pitching to a 6.75 ERA in 13.1 IP; he continued to strike out batters in droves, with 19 strikeouts, and his 5 walks were palatable – but he was hit hard when batters did make contact. It was ugly. All told, Kahnle pitched to a 6.56 ERA (67 ERA+) in 23.1 big league innings.

Unlike Cole, it’s easy to pinpoint a reason for Kahnle’s struggles – and it comes in graph form. 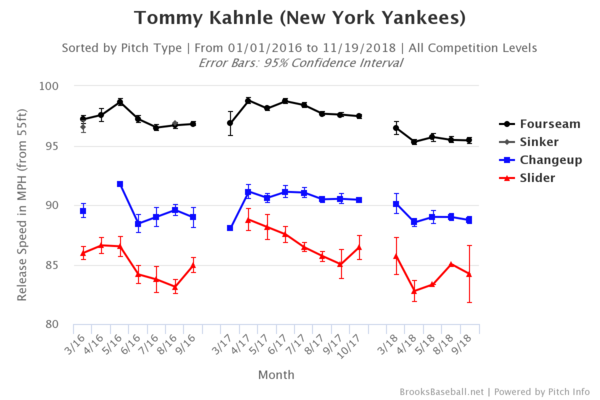 Kahnle’s fastball averaged 97.0 MPH in 2016, 98.1 in 2017, and 95.5 in 2018 – and that’s incredibly significant. His other offerings dipped at similar rates, too, so it does make one wonder if the aforementioned shoulder tendinitis played a role throughout the season. His overall walk rate of 14.0% was awful, but his walks trended downwards when he was recalled, and it didn’t really matter; Kahnle’s biggest issue was that batters were able to square-up all of his pitches and drive them with authority. The fact that he wasn’t locating didn’t help, of course, but it’s a bit easier to get away with that when you have truly elite stuff (see: Betances, Dellin).

The Yankees have three more years of team control remaining on Kahnle, and this will be his second trip through arbitration as a Super Two. He’s slated to earn about $1.5 MM this year, and I fully expect the team to keep him around for at least another season, with the hopes that an off-season of rest will cure what ails him.