Dead Bats Society
The dream of an 81-0 home record was put to bed in the series opener, thanks to a 5-2 loss to the Orioles on yet another chilly night in the Bronx. After averaging more than 10 runs per game vs the O’s at Yankee Stadium last season in winning eight of 10 meetings, and never scoring fewer than four runs in any game, they scored just two runs in Thursday’s loss. Masahiro Tanaka allowed three runs, a notable number because Yankee starters had allowed two or fewer runs in each of the team’s first six games, the first time they did that since 1911.

Tanaka cruised through the first six innings allowing just three baserunners among the first 20 batters he faced. He was almost perfect with his splitter, consistently spotting it below the knees and burying it in the dirt while generating eight whiffs on 13 swings against the pitch; he was less precise with his slider in those first six innings, though the pitch generated weak contact (83 mph average exit velocity on six batted balls) and kept the Orioles off-balance: 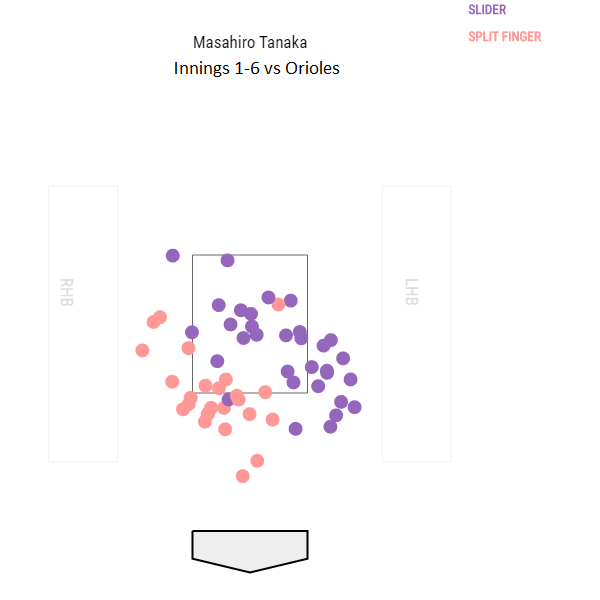 It all unraveled in the seventh inning when the first four batters went single-home run-groundout-single, ending Tanaka’s night on the mound. As you can see below, he served up three meatballs in the hitters’ sweetspot — a slider, splitter and four-seamer — and the Orioles didn’t waste their chances to pound him.

The Yankees’ bats were as cold as the near-freezing temperatures, though they had plenty of chances to score. They had 12 baserunners but couldn’t cash in as they went 1-for-15 with runners on base. The Yankee entered Thursday’s game hitting .294 and slugging .560 with runners on base, both marks second-best in the American League.

Nightmare on River Avenue, Part I
Friday night’s 14-inning disaster gave us our first nominee — of the series — for Worst Loss Of The Season (WLOTS). It had been three decades since they lost a game in the 14th inning or later against the Orioles — June 4, 1988 in Baltimore — and more than 50 years since it had happened in the Bronx — a 2-1 14-inning loss on July 16, 1967. The cleanup hitters in that 1967 game were Brooks Robinson and Mickey Mantle.

Without re-hashing the entire nightmare that played out over more than five hours of baseball, let’s highlight a few notable stats from the game.

Fighting Spirit!
The Yankees bounced back from Friday’s nightmare with a resounding 8-3 win, despite trotting out a makeshift lineup that was missing several regular starters and resembled something you might see in a spring training road game.

Sonny Gray struggled badly at Yankee Stadium last year — a 5.65 ERA in seven regular season starts there — but delivered a solid, workman-like quality start (six innings, three runs allowed) in his first outing here in 2018. Most notably, he kept the ball in the park, which was a huge step forward considering in 2017 he allowed at least one home run in each of his seven regular season starts in the Bronx.

Ronald Torreyes sparked the offense from the bottom of the order with a team-best three hits, and earned our coveted Obscure Yankeemetric of the Series award:

This was Torreyes’ ninth three-hit game out of the nine-hole since joining the team three seasons ago. In the designated hitter era (since 1973), the only Yankees with more three-hit games as the number-nine hitter are Roberto Kelly (11), Bob Meacham (12), Pat Kelly (14), Melky Cabrera (15) and Bucky Dent (19).

Didi Gregorius went hitless, snapping an 18-game hit streak against the Orioles, which was the fourth-longest by any Yankee in the Divisional Era (since 1969). Yet he still contributed with two walks, extending his trend of improved plate discipline in 2018. It was Didi’s second multi-walk game on the homestand, a huge positive stat considering that he had only one multi-walk game all of last year. The two walks were his seventh and eighth of the season — he didn’t reach eight walks in 2017 until July 3 (in his 58th game).

Nightmare on River Avenue, Part II
Deja Vu clobbered the Yankees on Sunday afternoon, as they suffered yet another gut-wrenching extra-inning loss to the Orioles. This one might have been even more brutal than Friday’s bummer, blowing a 5-0 first-inning lead — while chasing Orioles starter Mike Wright two outs into the game — and ultimately had the bases loaded with nobody out in the bottom of the 12th but couldn’t get anybody home. The last time the Yankees lost a game, despite the opposing starter allowing five runs and not making it out of the first inning, was September 23, 1992 against the Tigers.

Combined with Sunday’s crushing defeat, this is only the third time in the last 50 years that the Yankees lost multiple extra-inning contests this early into the season (through 10 games). It also happened in 1997 and 1980. Also, since 2011, the Yankees are now 13-27 in extra inning games at home, the worst record in MLB during that span. That seems bad! But what does it really mean? Yes, it’s happened twice in three days, but before everyone jumps off the ledge, here’s some rational thoughts to consider …

Extra-inning games tend to have random results in the long-term and year-to-year (for example, the Orioles were 16-2 in extras in 2012, but 7-7 in 2013 and 8-7 in 2011). Plus, this is a small sample of just 40 games played over seven-plus seasons for the Yankees, and you also have the dramatic roster turnover for the team on a yearly basis. And then there’s this stat to chew on: In the previous seven seasons — from 2004-2010 — the Yankees were 25-11 in extra-inning games at home, the best record in MLB during that span.

Back to the game … and the less written about it, the better. But unfortunately we can’t finish before acknowledging the pinstriped elephant in the room — Giancarlo Stanton. His game-ending strikeout in the 12th inning was his fifth of the game, and the second time on this homestand he’s earned a Platinum Sombrero. He is the first player in franchise history to compile two five-strikeout games within a Yankee career.

The only other players in the last 110 years — and likely major-league history — with multiple five-strikeout games in an entire season are Ray Lankford (three in 1998) and Deron Johnson (two in 1964). Neither of those guys did it in a span of less than a week, like Stanton. And even worse, it’s also the second time he’s struck out five times and produced no hits in a game this year. He is the only MLB player ever with two such games in a season.