River Ave. Blues » Bullpen gets credit where credit is due
Down on the Farm
Bernie jammin' with the Allman Brothers 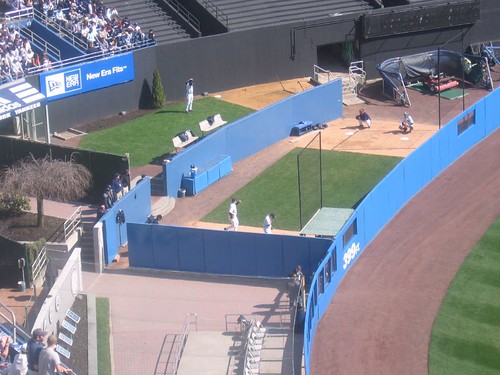 The bullpen has been a source of early-season strength for the Yankees. (Photo courtesy of flickr user Rodrigo Amorim.)

So we know that the Yanks’ starting pitching has left much to be desired. I covered that early today. I can only hope that warm weather and a few times through the rotation will clear up this messy picture.

But on the other hand, the Yanks’ bullpen deserves some credit. Let’s take a look.

So the Yanks’ bullpen has been the antithesis of the starting rotation. They’ve allowed less than a baserunner per inning and are recording just shy of a strike out per inning. Brian Bruney has been tremendous, and Mike Myers has been stellar in saving the arms as well. Even Andy Pettitte â€” not included on this list â€” got into the act today recording one more scoreless inning for the pen.

For Yankee fans, this early season bullpen success comes as a relief. For too long, we’ve watched Joe Torre trot out one subpar reliever after another. Remember Paul Quantrill? Steve Karsay? Felix Heredia?

Right now â€” and I know it’s early â€” those days seem behind us. The Yanks have a full slate of bullpen arms with whom I would feel confident seeing in any given situation. The blue door opens in left centerfield, and I feel relief instead of heartache.

Of course, the bullpen can’t keep pitching half of the team’s innings. But that’s a story for another day.

Down on the Farm
Bernie jammin' with the Allman Brothers