River Ave. Blues » Report: The King is in trouble
Stark: No Santana deal until Spring Training?
Predicting the Future 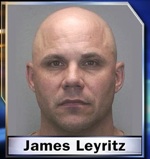 Stark: No Santana deal until Spring Training?
Predicting the Future