River Ave. Blues » Fate of the Bat hangs in the balance
Game Thread: Pettitte out with back spasms
Nettles facing prostate cancer 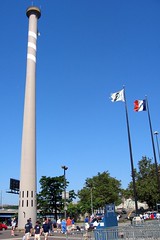 Take a look at any architectural rendering of the new Yankee Stadium, and something is clearly missing from the pathways outside the stadium. The Yankee Stadium Bat, that familiar meeting place in the Bronx, visible from the Major Deegan, has not been included in plans for the new Stadium, and no one is quite sure what’s going to happen to it.

Anthony Rieber, in today’s Newsday, tried to get ascertain the fate of the Bat. He did not have much success:

The 120-foot Louisville Slugger outside Gate 4 — actually a boiler stack fitted to look like a bat, complete with a knob at the top, tape at the handle and Babe Ruth’s signature on the barrel — seems to have been overlooked as the Yankees prepare to make the move across the street to a new Yankee Stadium in 2009.

“We do not have knowledge of what will happen to ‘The Bat,'” Yankees spokesman Michael Margolis said.

A spokesman for the city parks and recreation department, which owns and runs Yankee Stadium, referred calls about The Bat to Mayor Bloomberg’s press office.

Said mayoral spokesman Joseph Gallagher: “The city is working with both the Mets and the Yankees on a plan to sell memorabilia from their respective stadiums that will be timed with the end of the 2008 season, and won’t interfere with existing plans to demolish the stadiums.”

It’s highly doubtful that the City and team will find too many buyers for a 120-foot boiler stack.

A few months’ back, a similar quandary arose for Mets fans. The Mets were not planning on transporting the home run apple to CitiField, and fans were not happy to hear that news. In fact, a few of them — a high school classmate of mine included — starting an online movement called Save the Apple. While it’s unclear if they saved the apple from the Shea, CitiField will include its own home run apple.

But what about Yankee Stadium? The Bat doesn’t exactly have any sort of storied history. Everyone and their uncles likes to use as a pre-game meeting spot because it’s rather easy to spot and centrally located. Otherwise, it’s a piece of engineering equipment made to look somewhat like a Babe Ruth bat. The colors don’t even look much like a wooden bat, but it is a part of Yankee Stadium. Fans identify with that part.