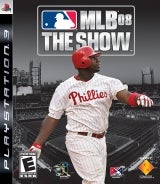 It’s not often I find myself eagerly awaiting the release of a video game, but this year The Show couldn’t come out soon enough. I had read previews online, watched trailers and flipped through screenshots all winter, and I got sucked up by the hype. The game is set for official release today, but I found a mom ‘n pop joint that was selling the game early, so I managed to get my hands on a copy this past weekend.

The gameplay is relatively unchanged from the 2007 version, although there are some minor tweaks to the Adaptive Pitching Intelligence thingy and baserunning controls. There’s a new Pitcher/Hitter Analysis feature, where you can look at what kind of pitches a guy likes to throw to a RHB in his third at-bat with two men on–stuff like that. You can basically go back and see a boatload of tendencies for both the pitcher and hitter based on data stored by the game. Frankly, I think it’s a bit of an informational overload for just a video game, but it’s cool that it’s in there.

What separates this game from the rest is the bells and whistles. There are a ton of new custom windups and batting stances, and a bazillion new catch, throw, grab, dive, slide, swing, run, etc. animations that make the game that much more real. I know you’re wondering, and yes, the Big Three are in the game. Joba and Phil even have their own custom windups (not IPK though), and Joba will occasionally do a toned-down fist pump when he strikes someone out. Here are some other changes summarized in bullet point form:

The game certainly is not without faults. The hitting is still just push button whereas most other games have incorporated some sort of analog stick mechanic. There’s still no sense of collision; players will go through each other on slides, running the bases, in the outfield, etc. Batting balls will just go through the pitcher and have no effect whatsoever. You’ll also need to go online and download a roster update ASAP, because the roster cutoff date was sometime in January, meaning Johan and Bedard are still on the Twins and O’s, respectively. Rookies like Evan Longoria, Jay Bruce, Kosuke Fukudome, Hiroki Kuroda, etc. – guys that have yet to officially appear in a big league contest – are not in the game. You’ll need to wait until the season starts and those guys make an appearance before they’re available in via roster update.

There are also some questionable player rankings. I’m starting to think the people who make this game hate BJ Upton, because he’s never had a good ranking, and it’s embarrassingly bad this year. But that holds true in all sports games. The only managers in the game are guys that were managers last year, so Girardi, Trey Hillman, and whoever the hell the Pirates hired aren’t in the game. They’ve been replaced with a bunch of made up guys, but at least Tony Pena Sr. and Bobby Meacham are in the game.

IGN gave the game an 8.7 out of 10, which seems like a perfect rating. The front end improvements and gameplay are outstanding, but the brain trust just seems unwilling to fix some of the long term negatives. EA’s MVP series was better overall, but until they get another license from MLB, this game will have to do. $65 is the going rate for PS3 games these days, so I can’t really complain about that.

I don’t play online often, but my screen name is RABmike. If anyone’s down for a game, hit me up. You are forewarned; I will mess you up with Rich Harden.