Another minor league season is in the books, but this year was a bit more tumultuous than last. I’d say more guys underperformed and disappointed than stepped up this year, which is the exact opposite of what happened last year. Graduation, injuries and ineffectiveness have been prevalent, but there have certainly been some bright spots.

Yankees’ affiliates combined to go 485-348 this year, good for a .582 winning percentage, marking at least the 17th consecutive season the affiliates have combined for an above .500 record. I say at least because B-Ref’s data only goes back to 1992, and I’m not going to spend the time to keep digging further. Take a second to get your head around how ridiculous a combined .582 winning percentage is – that’s better than a 94 win pace in a 162-game season. Insane.

Keep in mind that this isn’t some kind of best prospect list, it’s a recognition of the guys who had great years, regardless of prospect status. In order to keep things from getting redundant, the winner of the Player of the Year award isn’t eligible for the other major awards. Fun starts after the jump.

Minor League Player of the Year: Jesus Montero, C/DH, A-
The youngest full-season league player in the organization, Montero came out of the strong and didn’t let up all year. He starting the year off with two homers and 11 hits in the season’s first week, and finished the year with the most hits in the South Atlantic League (171) and the highest OPS on the team (.868). He drove in the game winning run in four straight games in late April, and also had a 15 game hitting streak in early August. Montero cemented his status as the best hitting prospect in the system despite playing the toughest position on the diamond more than half the time.
Honorable Mention: Mark Melancon, RHP, A+/AA/AAA; Zach McAllister, RHP, A-/A+

Minor League Pitcher of the Year: Zach McAllister, RHP, A-/A+
I picked McAllister as my top breakout candidate this year, but he far surpassed all expections. Starting the year as Charleston’s #5 starter, McAllister earned a promotion to Tampa after just two months thanks to a 6.63 K/BB ratio & 2.05 GB/FB rato. He was even better with Tampa, dropping his ERA below 2.00 and his WHIP below 1.00 while maintaining an excellent K/BB rate. Opposing hitters batting just .233 off McAllister, and he finished the season with an ungodly 115-21 K/BB ratio. McAllister’s ascension adds to an already monster 2006 draft haul.
Honorable Mention: Mark Melancon, RHP, A+/AA/AAA; Dellin Betances, RHP, A-

Minor League Hitter of the Year: Brandon Laird, 1B/3B/DH, A-
Almost an afterthought behind Montero, Bradley Suttle and Carmen Angelini in the River Dogs lineup coming into the year, Laird finished with the most homers (21), second most RBI (86) and highest slugging percentage (.498) in the system. Laird capped his campaign for the award with an otherwordly August, a month in which he batted .324-.402-.705 with 7 doubles, 11 homers and 37 RBI in just 29 games. Laird’s defense leaves something to be desired, but his bat will play anywhere.
Honorable Mention: Juan Miranda, 1B/DH, AAA, 1B; Edwar Gonzalez, A+/AA

Minor League Manager of the Year: Dave Miley, AAA
This the second consecutive MiLMOY Award for Miley, who continues to keep the SWB Yanks on top despite seeing his roster ransacked seemingly by the day. He managed far too many games started by relievers and was forced to pick the least defensively challenged left fielder to play center on many occasions this year, but Miley’s greatest achievement was persevering through the tragic death of his teenage son. SWB finished with the best record in all of AAA baseball, and Miley is more deserving of this award than ever.
Honorable Mention: Tony Franklin, AA; Torre Tyson, A-

The Edwar Ramirez Award (Breakout Player of the Year): Wilkins DeLaRosa, LHP, A-/A+
A weak hitting, strong armed outfielder in his first two seasons as a pro, the Yanks moved DeLaRosa to mound after he hit .232-.342-.279 combined in 2005 & 2006, and he took to move instantly. After battling expected bouts of wildness during his first year as a pitcher, DeLaRosa took a major step forward in 2007, posting a .190 BA against and striking out 10.55 batters per 9 IP. He still suffered from bouts of wildness (3.71 BBper9), but he showed that his live left arm was for real.
Honorable Mention: Phil Coke, LHP, AA/AAA; Jairo Heredia, RHP, A-

Best Pro Debut: Pat Venditte, R/LHP, SS
Considered a sideshow act by many, Venditte absolutely shoved it since turning pro. His 22 saves tied the Staten Island Yanks’ single season record, and held opponents to a ridiculous .117 BA against. Venditte didn’t walk a batter after August 3rd, and didn’t allow a baserunner in 18 of his 30 appearances. For a guy that doesn’t get much respect, no one’s been able to touch him for the last four years.
Honorable Mention: Corban Joseph, SS, Rk; Brad Rulon, RHP, SS

Comeback Player of the Year: Mark Melancon, A+/AA/AAA
Drafted knowing that he might need elbow surgery, Melancon went down with Tommy John surgery less than 6 months after turning pro, but he returned this year better than anyone could have expected. Steadily climbing the ladder from Tampa to Scranton, Melancon held batters to a .202 BA against with a 4.05 K/BB ratio, and kept more balls on the ground (1.54 GB/FB ratio) than most power pitchers. He also proved durable, throwing 95 innings thanks to low pitch counts. Melancon’s off-the-charts makeup and work ethic have put him in a position to start 2009 in the Bronx.
Honorable Mention: JB Cox, RHP, A+/AA/AAA; Tim Battle, OF, A+

Bounceback Player of the Year (started out poorly but picked it up in the second half): Dellin Betances, RHP, A-
In a season lacked an obvious bounceback candidate, Betances wins the award because he took the biggest step forward in the second half. Despite allowing just 6.05 Hper9 in April & May, his WHIP still stood at a ghastly 1.40 due to 6.55 BBper9 walk rate. Betances then went down with a minor injury, and apparently something clicked during his rehab stint. He returned to the River Dogs in July, and cut nearly four full walks off his rate the rest of the year, knocking it down to 2.83 BBper9. He still allowed fewer than a hit per inning (7.46 Hper9), and his strikeout rate never wavered from roughly 10.50 Kper9.
Honorable Mention: Steven Jackson, RHP, AA/AAA

Most Disappointing Player: Mitch Hilligoss, 3B, A+
Coming off a season in which he racked up a Sally League leading 161 hits and set a new league record with a 38-game hit streak, Hilligoss’ offensive production dropped off a cliff. His OPS dropped nearly 200 points (182 in reality), and he slugged just .298, which would have been considered a sub par BA for Hilligoss coming into the year. Just a brutal, brutal season. (I gave Alan Horne a pass on this “award” once news of his torn labrum broke.)
Dishonorable Mention: Carmen Angelini, SS, A-; Steven White, RHP, AAA/AA

Lifetime Achievement Award
This year’s recipient of the Lifetime Achievement Award just wrapped up his 6th full season with the organization, making his first foray into the Triple-A level. Drafted in the 5th round way back in 2002, this player has been teammates with everyone from Robinson Cano to Eric Duncan to Tyler Clippard to Estee Harris to Phil Hughes to Melky Cabrera to Chien-Ming Wang, with countless others in between.

After spending parts of the last four season with Trenton, he received a midseason promotion to Scranton this year, and had the best season of his career. Setting new career highs in BA (.285), OBP (.343) and SLG (.482), he also picked up 15 homers & 64 RBI while played strong defense at all three outfield spots. 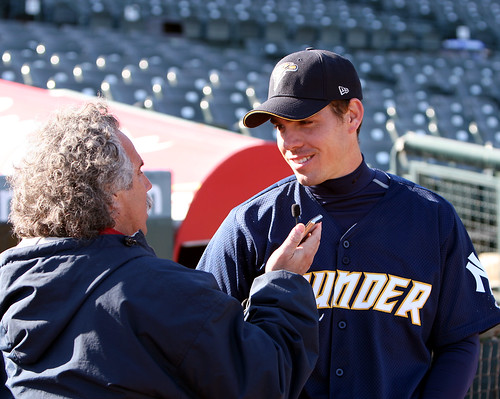