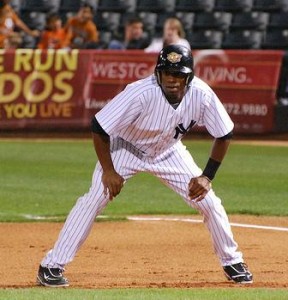 First things first, let’s take a look at that BABIP. Unlike pitchers, position players tend to have their own unique BABIP’s, so you can’t just look at a number and conclude anything from it without first comparing it to the player’s established BABIP. The graph below shows Jackson’s BABIP as his career has progressed, starting with his first game at Low-A Charleston in 2006 and carrying right through to this past Sunday. Remember to click every graph in this post for a larger view. 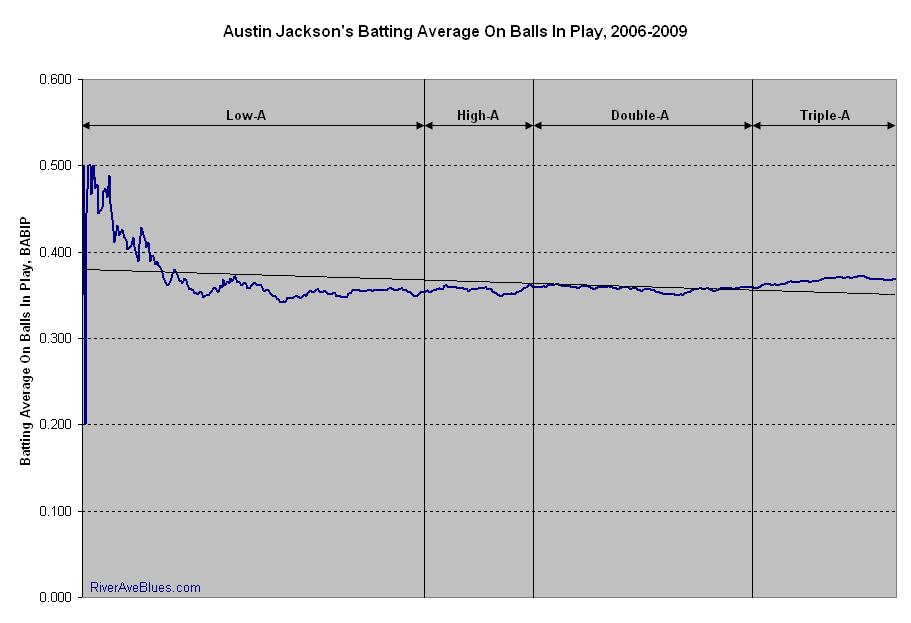 Jackson spent a year and a half with Charleston, just a half year with High-A Tampa, a full year with Double-A Trenton, and so far a little over half a season with Triple-A Scranton. As you can see from the graph, Jackson’s BABIP has hovered around .370-.380 for the past two and half seasons. I think it’s safe to say we can consider this his baseline, at least in the minors. So based on that, sure his .424 BABIP in 2009 is high, but that’s nothing we didn’t already know. If we back calculate using a .375 BABIP, Jackson’s picked up 11 extra hits due to luck, meaning his batting average should actually be (drumroll please) .288. It’s a 36 point difference, but there’s nothing wrong with hitting .288 as a 22-yr old in the International League.

One of the other criticisms of Jackson’s game is all the strikeouts, and understandably so. In 332 plate appearances this season he’s struck out 78 times, or 23.5%. That’s high, but not career crippling high. Big leaguers Matt Kemp (24%), Evan Longoria (24.7%) and Justin Upton (27.2%) strike out more, but of course those guys hit for lots more power. We’ll get to the power a little bit later.

Like the BABIP graph above, here’s Jackson’s strikeout rate throughout his career, starting way back in 2006. I also added his walk rate for good measure, since strikeouts and walks go hand-in-hand. 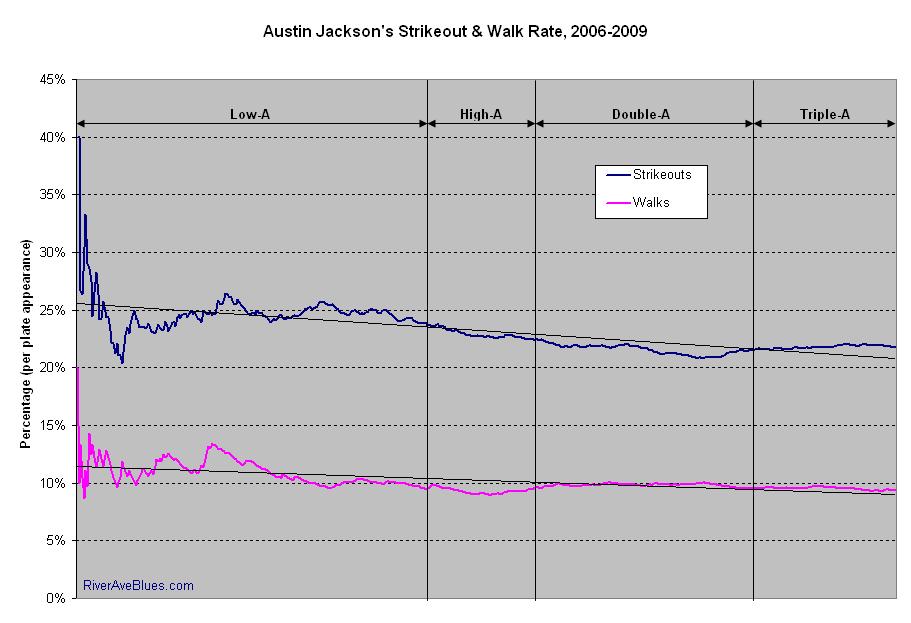 Looking at the graph, you can see Jackson’s strikeout rate has generally gotten better as his career has advanced, but his K% this year is higher than it was last year. There are plenty of potential causes for this, including his long swing and more advanced pitchers. His walk rate is down a touch as well, so we could be looking at a situation where Jackson is working deep counts at the same rate as before, except that those deep counts are resulting in strikeouts more often than they have in the past. That certainly sounds like something that can be explained by the higher quality of pitching, and it’s up to Jackson to make the necessary adjustments. This is all just speculation on my part though, so don’t take it as fact.

Lastly, let’s take a look at Jackson’s power output. Instead of slugging percentage we’ll use isolated power since it more accurately measures the ability to hit for extra bases. Here’s one last graph, this one showing Jackson’s IsoP throughout his career. 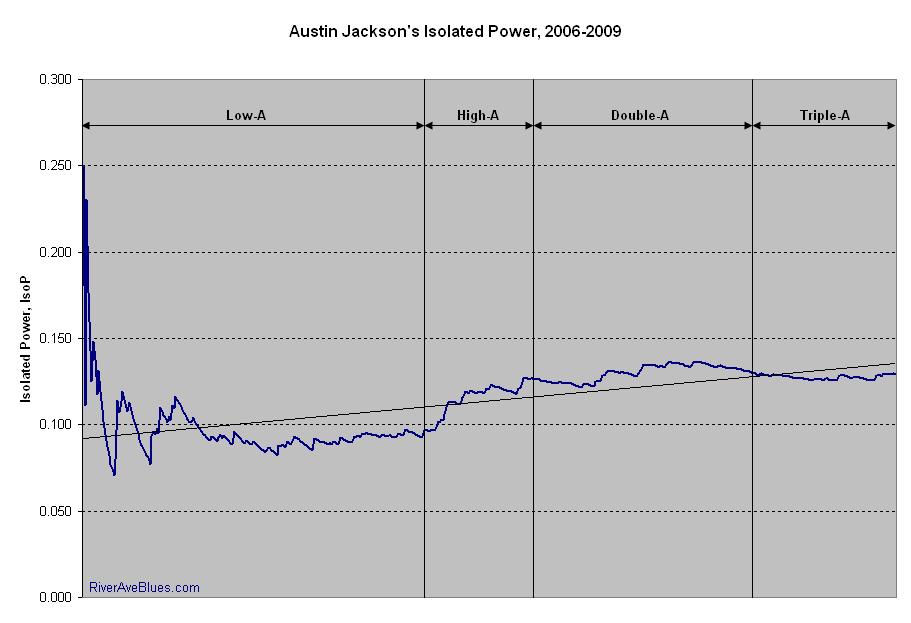 The good news is that his ability to hit for power has gotten better over the years, something you’d expect to see as he’s got older, physically matured, and gained more experience. The drop in power from last year isn’t much, and looking at the graph he’s hit for about a .125 IsoP over the last year and half. The Major League average IsoP is .155 this year, so yeah, you’d like to see him improve in the power department. Remember though, the kid is just 22 and it’s foolish to think he’s a finished product at this point. Heck, four years ago right now he was trying to decide between professional baseball and basketball at Georgia Tech.

The problem though, looking the last two graphs, is the plateau. As a player climbs the ladder ideally you’d want to see improvement at every step of the way. It not always perfectly linear improvement of course, as there’s often bumps along the way. There’s no better example of that than Brett Gardner. Jackson has exhibited somewhat of a plateau since his big coming out party with High-A Tampa in the second half of 2007. That’s when his IsoP jumped from sub-.100 to the .120-.130 range, but it’s stayed there ever since. The strikeout rate as a whole is gradually coming down, which is nice, but the walk rate is relatively unchanged in the last two and half years.

Again, as I said above, it’s foolish to think Jackson is done developing at this point. He has been a full time baseball player for only four years now, which isn’t much in the grand scheme of things. However, you can’t completely discredit the plateau, and it’s the primary reason Jackson’s stock has taken a little bit of a hit over the last year. There just haven’t been many signs of improvement lately.

Still one of the 50 best prospects in the game, Jackson projects as a solid everyday centerfielder in the major leagues, and that means he should be a damn fine player. If he starts to show some improvement and completely turns his physical gifts into baseball skills and production, he’s still got a chance to a special, special player.

Pondering the addition of a veteran starter
First Half Review: Corner Infielders