River Ave. Blues » The most important game of the year
The October (and November) of A-Rod
A nice day for parade 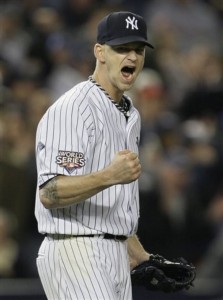 Fans are quick to throw around the “must win” or “huge game” or (ahem) “playoff preview” moniker these days. If a team loses two games in a row with a division rival set to come into town over the weekend, then it’s called a big game. No matter what fans call it, you can always tell which games are the most important by how the team treats them. When Ian Kennedy is brought into the eighth inning with a one-run lead in Anaheim for his first action of the season, then yeah, it’s not all that important.

Most of the time for a playoff club, the most important game of the season is a Game Seven, or an elimination game where the season was on the line. Those are the true “must-wins,” not those dumb games in June that seem important just because the offense is in a little bit of a funk.

For the 2009 Yankees, the most important game of the year seems pretty clear to me: Game Two of the World Series.

Think about the circumstances coming into the game. Cliff Lee had just manhandled the Yankees the night before. He crushed them, grabbing liners behind his back and shagging pop-ups nonchalantly when he wasn’t striking guys out. For a team that had dominated the competition during the regular season and made good clubs like the Twins and Angels look like Little League teams with all the mistakes they forced, Game One of the World Series was a humbling experience.

Not only did the Yankees come into Game Two already down one-love in the series, they were going on the road to Philadelphia for the next three games. Heading down the turnpike down two games to none was something the Bombers wanted to avoid at all costs. So they gave the ball to AJ Burnett, the most unpredictable starter in their playoff rotation.

He pounded the zone early all night, throwing first pitch strikes to 22 of the 26 batters he faced. He threw his fastball and curve at almost a 1:1 ratio (53 fastballs, 45 curves), and allowed the first four batters in Philly’s’ lineup to reach base just twice, and one of those instances was an intentional walk to Chase Utley. Burnett sat down the last eight batters he faced, and the only run he gave up came on a ball that ricocheted off Alex Rodriguez’s glove.

It was a masterful performance, and the game was more important to the outcome of the Yankees’ season than either of his Game Five starts (ALCS or World Series). Opposing starter Pedro Martinez held the Yankees’ offense down, meaning there was little margin for error. Anytime a starter can hand the ball off to Mariano Rivera in a playoff game, then you know he’s done his job and then some.

Let’s give AJ some props. He’s frustrating as hell, but the dude was money in the team’s most important game of their championship  season.