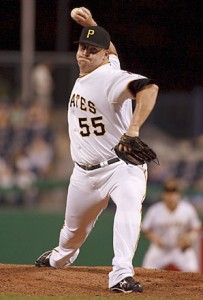 With Phil Hughes and Joba Chamberlain slated to start the 2010 season as members of the starting rotation, many fans are wondering how the Yanks will deal with the late inning bullpen void that those two have filled over the last few seasons. Some want to see them bring in Rafael Soriano Mike Gonzalez, others are content with letting David Robertson and Damaso Marte hold down the fort, while some are bringing up out of the box solutions. The Pirates, however, may have just gift-wrapped the Yanks a setup man by non-tendering their closer Matt Capps last night. Hey, it is the holiday season.

Capps (obligatory video) had a down year in 2009, posting an ugly 5.80 ERA in 51.1 IP despite converting 27 of 32 save opportunities. He also missed some time mid-season with elbow discomfort, though no structural damage was found. I wouldn’t bother writing this post if I didn’t think there was bounceback potential, and it’s pretty clear Capps has some.

There’s basically two things you want your late game relievers to do (any pitcher, really), and that’s miss bats and throw strikes. Lord knows there’s nothing more frustrating than watching a reliever walk batters late in games. Thankfully, Capps doesn’t beat himself with free passes at all. He’s issued just 32 (!!!) unintentional walks in 271.2 career innings, even including his down year. That’s a 1.06 BB/9. Ridiculous. As for missing bats, Capps has a 6.9 career K/9 (7.6 last year), and batters have made contact on 82.2% of the swings they’ve taken against him, which isn’t great. Close to 70% of the pitches he’s thrown in his career have been strikes, including a whopping 67.7% on the first pitch, so he might be one of the rare guys who throws too many strikes. You have to admire his dedication to pounding the zone, but there’s nothing wrong with working an inch or three off the plate from time to time.

Despite the elbow issue, plus a shoulder related disabled list trip in 2008, Capps’ velocity was fine last year (92-94, mostly). He throws his fastball a little more than two-thirds of the time, using a slider to battle righties and a changeup against lefties. Prior to his subpar season in 2009, he showed a very small platoon split (.237-.262-.374 vs. RHB and .252-.294-.391 vs. LHB) thanks to that pair of offspeed pitches, so it’s not like you have to lift him against non-superstar lefthanders. Plus, at 6′-2″, 245 lbs, he fills the all-important bullpen fat guy role that’s been vacant since Chris Britton’s untimely departure.

At just 26-years-old (birthday is in September, so he’ll spend basically the entire 2010 at that age), there’s still plenty of room for improvement. It’s not like we’re talking about a 30-something journeyman here. Capps has legit end-game potential and is approaching what should be the prime of his career, and the best part is that the Yanks don’t necessarily need to count on him to be that guy. He can start the year as just one of the guys in the bullpen, eventually working his way into higher leverage innings.

Would Capps be down for that? Who knows. Saves equal bucks, and Capps has one more year of arbitration left after 2010, so middle relief would cut into his earning potential. Perhaps that could be solved with a two-year contract. He earned $2.3M last season, and was looking at $3M or so had he been tendered a contract. I’m not going to pretend to know what the price will be, but if it’s reasonable, I hope the Yanks would make a move.

Given the lack of attractive (and affordable) late game bullpen options on the market, I suspect Capps will draw significant interest. We’ve already seen four free agent relievers take home a combined $32.7M this offseason, and you could make a convincing case that Capps is better than all of ’em. There’s usually one or two true non-tender gems a year, and this offseason there’s actually a fit for the Yanks. Hopefully they take advantage.