River Ave. Blues » Running down Nick Johnson’s myriad injuries
Coaching staff set to return in 2010
After one year, a home run park but nothing else 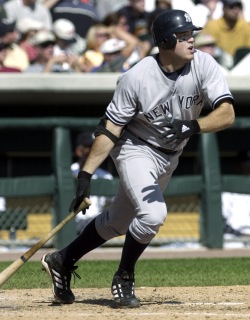 Nick Johnson, as we know, is not a pillar of health. If he were, he’d have received far more than the one-year, $5.75 million contract he signed earlier this off-season. The Yankees took a gamble, and considering the injuries that have kept him on the bench during his eight-year MLB career it’s a pretty considerable one. Yet Johnson doesn’t appear to suffer any chronic ailments. The Yankees had concerns about Hideki Matsui’s knees, knowing that they could be an issue in 2010. But with Johnson, there’s no single body part that has caused him constant problems.

Chris at The Yankee U pulls up Johnson’s injury history, noting that he’s missed 589 season days to injury over his career. That seems like a staggering number, though it gets skewed because of Johnson’s 2006 and 2008 injuries. Following an otherwise healthy 2006 season, Johnson broke his femur after colliding with teammate Austin Kearns. He missed the final seven days of the season and then the entire 2007 campaign, totaling 193 days. Then, 38 games into his 2008 return, he tore a tendon sheath in his wrist while swinging. That adds another 137 days. The two injuries cost Johnson 330 total days on the disabled list, or 56 percent of his career total.

Of the two injuries, the wrist clearly causes more concern. That he got through 2009 without any wrist problem provides a positive outlook, but there still has to be some concern. In fact, injuries to the right wrist and hand plagued Johnson earlier in his career. In 2002 he missed 26 days with a right wrist contusion, and then missed another 25 days with right wrist soreness in 2003, though that came in training camp. But later that season he missed 70 days with a stress fracture in his right hand. Like the wrist injury that ended his 2008 season, it came on a swing. He suffered no hand or wrist injuries between 2003 and 2008.

The other major injury, the broken femur, resulted from a freak accident. Perhaps his fragility played into the severity, but there’s no way to prove that. It wasn’t the first time Johnson suffered a freak injury that kept him out for a prolonged period. On August 20, 2004, a Royce Clayton ground ball struck Johnson in the face, dropping him face first into the ground. He suffered a fractured right cheekbone, sidelining him for the rest of the season, 44 days. That puts his freak injury total at 237 days, or 40 percent of his total injury time.

In 2009 Johnson missed 24 days due to injury. The first came after fouling a pitch off his foot. The second, a right hamstring strain, landed him on the 15-day DL and caused him to miss 17 days. It must not have been that severe an injury; we’ve seen players miss much more time with hamstring strains. Finally, he missed six days in September with the flu. So, one real injury, and even that was less severe than many of its type.

Nick Johnson is an injury prone player, no matter how many mitigating factors exist. But because of his similarity to other players on the market, specifically Matsui, those mitigating factors probably did play into the decision to sign him. Because his time on the DL is skewed by two freak injuries, and because he had surgery to correct the one recurring injury seemingly make him a better bet than other injury prone DH types. For instance, Carlos Delgado is coming off major hip surgery, and Hideki Matsui has chronic knee problems. The Yankees, it appears, would rather deal with an injury-prone player with no chronic issues than one with a specific area of concern.

If you want to check out Johnson’s injury history, here’s the chart, courtesy of Fantasy Pitch F/X. 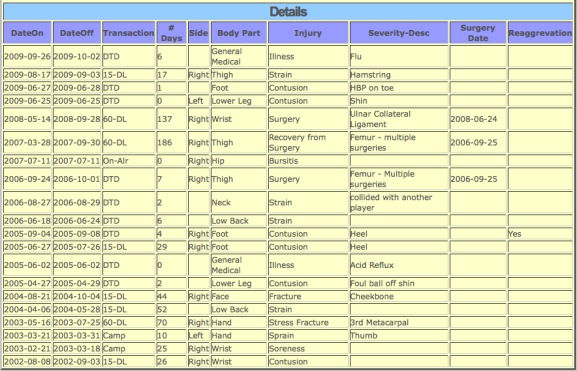 Coaching staff set to return in 2010
After one year, a home run park but nothing else