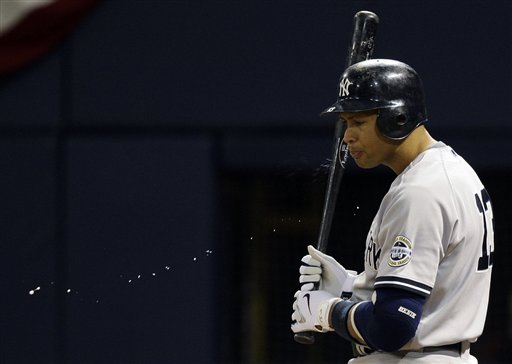 For the second time this week, I’m totally going to steal a post idea from another site, this time Lookout Landing. I can’t help it. Those guys over there do some great stuff, plus the dog days of winter can make it tough to find decent content. What we’re going to do today is look at some long balls. The ten longest hit by a Yankee during the last five years in fact, the entire Hit Tracker era. Actually, we’re going to look at 13 homers, because a few tied and I figured I’d include all of ’em.

The Yankees have been lucky enough to have some tremendous power hitters on their roster over the last, oh I dunno, 90 years or so. The last half-decade has certainly been no exception, and we’ve seen some truly majestic blasts come off the bats of the good guys in that time. We’ve seen balls go into the upper deck at the Old Stadium, off the hotel in Toronto, into the rocks in Anaheim, pretty much everywhere you think a baseball couldn’t be hit.

Using Hit Tracker’s true homerun distance, here are the longest homers hit by the Yankee in the last five years. I linked to video when it was available, which sadly isn’t nearly enough.

10. Alex Rodriguez, Aug. 15th, 2005, 435 feet
With the game scoreless in the top of the 4th inning, A-Rod stepped to the plate against Tampa Bay’s Casey Fossum with Gary Sheffield on first and two outs. After taking strike one and fouling off the second pitch for a quick 0-2 count, Fossum tried to bury two of his signature curveballs in the dirt for the strikeout, but Alex took both pitches to work the count back even. Fossum’s fifth pitch of the at-bat wasn’t so lucky, as A-Rod turned it around and sent it over the left field fence for a two-run lead. It was the 36th homer of A-Rod’s first MVP season in the Bronx.

9. A-Rod, Sept. 15th, 2005, 448 feet
Exactly one month after clubbing the tenth longest homer of the last half-decade, A-Rod outdid himself by teaching Seth McClung of the Devil Rays a lesson. Rookie Robbie Cano hit a grand slam off McClung just three batters earlier to the tie the game at five in the 7th inning, and Alex gave the team the lead by driving in Derek Jeter and himself with a long fly ball to center. It was his 42nd homer of the season.

8. Robinson Cano, July 29th, 2009, 451 feet (video)
The Yanks were just about ready to enter into cruise control by this point of the season, and with two outs and a two-run lead in the 6th inning, Cano showed Matt Garza his oh face. After fouling off a tough 1-2 splitter, Garza left the next split up in the zone and Cano destroyed it, sending it over the right-centerfield wall for a 3-0 lead and his 15th homer of the season, eclipsing his 2008 total with 61 more games to go.

6a. Hideki Matsui, April 24th, 2007, 465 feet
Back when he had knees, Matsui was known to do some damage with the stick. Of course, he still does damage, but back then Godzilla was just a bit less fragile. Leading off the second inning of a scoreless game in Tampa, Matsui took Scott Kazmir’s first two pitches off the plate for a hitter friendly 2-0 count, then sent the third pitch of the at-bat down the right field line and into the people for a quick 1-0 lead. It was Matsui’s first of 25 dingers on the season.

6b. Hideki Matsui, May 28th, 2007, 465 feet
About a month later, Matsui matched his gargantuan blast in garbage time of a game the Yankees would lose 7-2. With Jeter on first, Matsui took Dustin McGowan’s final pitch of the night and sent it straight over Vernon Wells head towards the hotel in center field in Toronto. It was the only runs the Yanks would score on the day, but an impressive blast nonetheless.

5a. Jason Giambi, April 16th, 2006, 466 feet
The Giambino hit some major bombs during his time with the Yanks, just like this one off of Brad Radke at home. Scuffing along at 11-19, the Yanks were on the verge of being swept by the Twins, but Giambi took matters into his own hands and gave the team a 2-0 lead in the second inning with a mammoth shot to dead center. He took Radke deep again a few innings later to further increase the team’s lead, and both blasts were part of his memorable nine homer April.

5b. Wilson Betemit, June 29th, 2008, 466 feet (video)
This one’s over a year old and I actually remember it. The Yanks were down 3-0 to the Mets in Shea, when Betemit hammered an Oliver Perez meatball over the left field bleachers in the 7th inning to get the Yanks on the board. He didn’t hit much, but when he got a pitch he liked, Betemit sure could hit the ball a long way. He’s hit just two big league homers since this blast.

4. A-Rod, Aug. 9th, 2008, 467 feet (video)
It was the 6th inning of scoreless game in Anaheim on a nationally televised Saturday FOX broadcast (a recipe for disaster) when A-Rod took John Lackey way deep to give the Bombers the lead. Lackey tried to bust him inside, but he left the heater up and out over the plate, which Alex promptly turned around and hit into the rock pile beyond the left-centerfield wall. It was glorious.

3a. A-Rod, June 30th, 2008, 469 feet
Already down 2-0 to his former team at home, A-Rod jumped all over Scott Feldman’s first pitch in his second at-bat of the game. The ball landed in the garbage area next to the visitor’s bullpen at the Old Stadium, though it wasn’t enough as the Yanks dropped the game by a 2-1 score. It was A-Rod’s 16th jack of the season, though it was the second in a seven homer binge that spanned three weeks.

3b. Juan Miranda, Oct. 2nd, 2009, 469 feet (video)
This one was crushed. The Yanks were just running out the clock on the season, down 11 runs to the Rays on the road with all the regulars on the bench catching some rest before the postseason. Miranda worked the count full against Dale Thayer, who I’m certain he’s faced in Triple-A several times during the last few years. Miranda put that familiarity to work, sending the ball to the last row of the right field bleachers for his first (and only) big league homer.

2. Jorge Posada, Sept. 19th, 2006, 472 feet
Fuggedaboutit. The Yankees were in Toronto with about two weeks left in the season, and at this point they were nursing a double digit lead in the division. Posada took three balls and a strike against Shaun Marcum to lead off the second inning, then sent the fifth pitch of the at-bat over the right field wall for his 20th big fly of the season. The Yanks would go on the win a meaningless game, but Georgie’s homer will go down as the second furthest by a Yankee of the last five years.

1. A-Rod, June 15th, 2006, 488 feet
You were expecting someone else? The Yanks were trailing the Indians 6-1 in the 7th when Alex came to the plate to lead off the inning against future Cy Young winner Cliff Lee. After taking the first two pitches for a favorable 2-0 count, Lee went to the get-me-over fastball and A-Rod sent-it-over the left-centerfield fence for a solo shot. It was just his 14th homer of the year and a rather meaningless one at that, however no Yankee in the last five years has hit one further. It’s a shame we don’t have video of this one.

Could LaRoche make Conor Jackson available?
Will the owners decide to lengthen LDS?