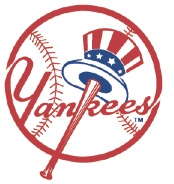 Even though the Yanks still have 17 regular season games left before the 2010 campaign heads to the postseason, Major League Baseball has unveiled the schedule for 2011. To avoid the spectre of November baseball, Opening Day is a Thursday in March, the season ends on Wednesday, September 28 and the playoffs could, in fact, begin before October does.

For the Yankees and for all of baseball, Opening Day 2011 will be Thursday, March 31. Coming two days after my birthday, that’s a great present. The Bombers will start the season at home against the Detroit Tigers. I’m already anticipating a CC Sabathia/Justin Verlander duel, but be prepared to dress warmly as average March 31 highs are only around 56 degrees.

If a Thursday opener seems odd, that’s because it is. According to Major League Baseball, this is only the 11th Thursday Opening Day in baseball history, and the most recent was was in 1976. This is the first non-Sunday or Monday start since 1998.

The early end date too is rare. The last season to wrap this early in September was 2003, and the last to finish on a day other than Sunday was 1990. MLB is promoting the early end date as a way to end the World Series before November, but the game could accomplish this goal by tightening up the playoff schedule and eliminating unnecessary off-days as well. With the season over on September 28, the Division Series should on September 30 and October 1.

While you can browse through the MLB master schedule via the link in the first paragraph, the Yanks’ own site has a sortable version of the team’s 2011 schedule available here. Despite cold April temperatures and the constant threat of rain in New York, the Yankees go heavy on the home games early on. Twenty of the team’s first 28 contests are in the Bronx, and 32 of the first 51 games are at home. On the flip side, 26 of the final 40 games and 12 of the last 17 are on the road.

April is heavy on AL Central opponents. After a three-game set against the Tigers (3/31-4/3), the Twins stop by for four, and the White Sox drop in for their own four-game set (4/25-4/28) as well. After the first seven games at home, the Yanks take a quick three-game road trip to open Boston’s home slate (4/8-4/10) before a home set against the Orioles and Rangers. All April games but the six against the Orioles are going to be against teams that finished above or near .500 this year.

May brings some divisional rivalries, including, oddly enough the only two games the Yanks play against the Rays until July (5/16-5/17 in Tampa Bay) and a three-game set against Boston (5/13-5/15) as well as Interleague Play. The Mets visit the Bronx for a three-game set starting May 20, and the month ends with one of the Yanks’ two West Coast trips. They play nine against the Mariners, A’s and Angels beginning May 27th. The two trips are a welcome change from 2010’s three swings out west.

In September, 18 of the Yanks’ 24 games will be against AL East rivals. Sandwiched in between these sets is a West Coast swing to Anaheim (9/9-9/11) and Seattle (9/12-9/14). Five of the Yanks’ last eight games are against Tampa Bay with the Rays in town for two (9/20-9/21), and the Yanks’ closing their season in Tampa Bay (9/26-9/28). Once again, the Red Sox will be the final regular season opponent at Yankee Stadium, as Boston drops for a three-game set on the 23rd of September. And that’s all she wrote.

Thought to ponder: Ivan Nova in the bullpen
Hughes' biggest start of the year