The following post was written by weekend writer Brock Cohen.

Yesterday, we looked at the origin and definition of GRIT capacity, one of the newest baseball metrics available to those who want a full composite of the courage and tenacity of a player without having to resort to anecdotal descriptions like “gutsy” or “spunky.” No longer will fans be bound by the words of baseball announcers who may tab a player as “gritty” for affecting a scowl or waving a towel when we know full well it’s the guy who can taste the onset of a four-game win streak by licking a blade of outfield grass who’s the real GRIT hero.

Now that we’ve established what GRIT capacity is, we can quantify it by first isolating and then totaling its four primary components: Guts, Resolve, Instinct, and Toughness.

We’ll start with guts, GRIT’s most integral component. To decipher it, we first select the player’s offensive stats that are most associated with a presumptive likelihood of engaging in a bar brawl: hit-by-pitches, seasons played as a member of the Boston Red Sox, and public displays of false bravado. Each of these components factors into the guts subset and receives its real numeric value.

Having played four full seasons for Boston, in 2008, Player X was hit by four pitches. Also, despite a reputation for insufferable petulance, he engaged in only one public display of false bravado. Knowing this, all that’s left to do here is to find the sum total of all of these elements, which gives Player X the above-average guts component score of nine. In other words, here’s a player we can envision willfully taking a 95 MPH heater to the ribs, and then three hours later, shattering a bottle of Schlitz against a biker’s jaw after losing 2 out of 3 in beer pong.

Next up, we have resolve, the GRIT component that measures a player’s drive and stamina. This time, we’ll combine a new set of criteria that establishes a player’s ability to endure abject pain and misery: total games played (during the 2008 season), plus total years spent toiling in the minor leagues prior to his big league call-up, plus additional years beyond one’s free agency date spent playing for the Pirates (if applicable). We then divide this sum by the sum of the universal indicators of physical and emotional frailty: disabled list stints and in-season lollygags, each of which receives a numeric value of 2.

Looking at Player X, we see someone who breezed through the minors in three seasons and played in 157 games in 2008 while accruing zero DL stints. However, for a player with an otherwise growing list of impressive GRIT peripherals, he also accumulated a staggering eleven lollygags. In fact, one such misstep cost his team a pivotal late-season game against the rival Tampa Bay Rays in which he inexplicably stood motionless as he leered at his own flexed right bicep while a slow grounder trickled past for the game-winning hit. Along with not sprinting to first base after a walk, removing oneself from a game after tweaking an abductor, or draping a heated water bottle over one’s lap in the dugout during a night playoff game at Comiskey Park, few things decimate a player’s GRIT faster than adoring or fondling one’s arm, ab, or calf muscles during crucial moments of a game. There’s no doubt these on-field lapses proved costly to Player X’s 2008 resolve quotient and overall GRIT capacity. But for now, it’s enough to know that he finished the season with a resolve component quotient of 14.5.

Instinct is the GRIT component that measures what’s frequently dubbed by veteran analysts as a player’s “feel for the game” or “Baseball I.Q.” As such, it accounts for four elements that are attributed to players with keen mental awareness and a higher understanding of the game: sacrifice bunts, sacrifice flies, stolen bases, and the third – but often overlooked – indicator, which is intuition (sometimes referred to as “horse sense”), which receives a numeric value of 10. Valued for their focus, versatility, and wild-eyed awareness, players with a strong instinct component can compensate for a shortage of talent with uncanny powers of perception. Brett Gardner, for example, who was second only to Scott Podsednik in leftfielder GRIT capacity in 2010, has been known to literally taste the rotation on a breaking pitch as it approaches the plate. By placing his hand on the infield prior to a game, veteran shortstop David Eckstein can predict within 98 percent accuracy the total number of bounces groundballs will take during the entire ensuing game. And Twins shortstop Nick Punto can smell a baby crying in the upper-deck bleachers (which, he claims, carries the scent of lemon Now and Laters).

Player X initially shines in this department with seven sacrifice bunts, nine sac flies, and twenty stolen bases. But does he possess the critical third indicator of intuition? Sadly, it turns out, he does not. Despite flashing a knowing smirk that seems to indicate a superior knowledge of his surroundings, when our Player X was asked about whether or not he believed himself to have keen powers of perception, he stared confounded at the interviewer and then responded with, “Your face is a keen power of perception – ha! Nah, you’re face is cool – just messin’ with ya! Whatever, ya know?”

As a result, Player X receives a surprisingly mediocre instinct component score of 36, well below the league leaders from 2008.

Lastly, we have toughness. Players who exhibit this characteristic have an abnormally high threshold for both receiving and inflicting pain and anguish. Think of the kid back in P.E. class who got off on pegging terrified freshmen in the face with dodgeballs, only to prove he wasn’t above it all by inexplicably slamming his own forehead into his locker before Physics class amidst his own blood-curdling pleasure cackles. Thus players with a high toughness component don’t merely endure pain; they marinate in it. They dive into the stands on balls looped into the upper loge section or barrel into home plate with their team up by eleven. And they lobby their managers for them not to have to wear a batting helmet, even though they’ve been mandatory since 1971.

For players with unusually high toughness ratings, catching a boring sinker in the elbow fills them not with anger, fear, or even defiance, but mild disappointment – like the feeling one gets when a delicious meal or great movie has come to an end. When they get plunked, the look on their face doesn’t say, “Damn, man…Damn!” or “You don’t know me!” but rather, “It’s over? And so soon?” Coaches, managers, and reporters remind us that these aren’t sado masochistic sociopaths; they’re warriors who should be looked upon as everything that’s right with the game.

Assessing Player X’s toughness component will take almost no time at all, since there’s only one true element to measure: Hair. This may seem inane and painfully superficial at first, but when one considers baseball history’s litany of hard-nosed players, these designations prove remarkably accurate. The graphs below reflect hairstyle translation scores. 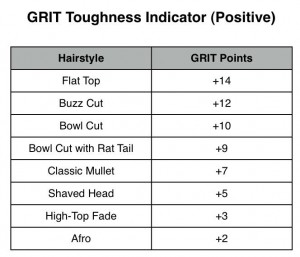 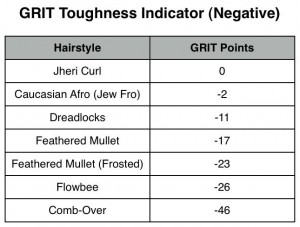 Still unconvinced? Ty Cobb had a flat-top, as did Billy Martin. Pete Rose and Johnny Bench were both proud owners of impeccable bowl cuts. Phillies tough-guy backstop Darren “Dutch” Daulton wore a classic Mullet. And as for his entire 1993 hardscrabble pennant-winning Phillies team? Every last player on the 24-man roster be-mulleted.

Our Player X scores a solid 12 points here with his traditional #2 metal razor buzz cut, which closes out his toughness component and preps him for his final GRIT score. Because we’ve already made all the preliminary calculations, we’ll determine this by doing some fairly simple arithmetic:

And there you have it. Player X’s 2008 GRIT capacity was 71.5, which put him among the elite at his position for the 2008 season, as illustrated by the chart below: 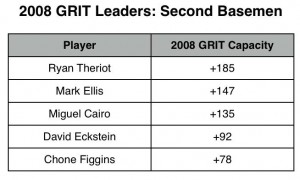 Whether or not GRIT translates to “good” is still open for debate, although judging from the table above, there seems to at least be a strong correlation. As the answer to this question begins to emerge, at the very least we no longer have to acknowledge a player’s grit based on what Hawk Harrelson thinks is “heady,” whom Rick Sutcliffe believes has “that look,” or what Joe Magrane is talking about when says “spunk factor.”