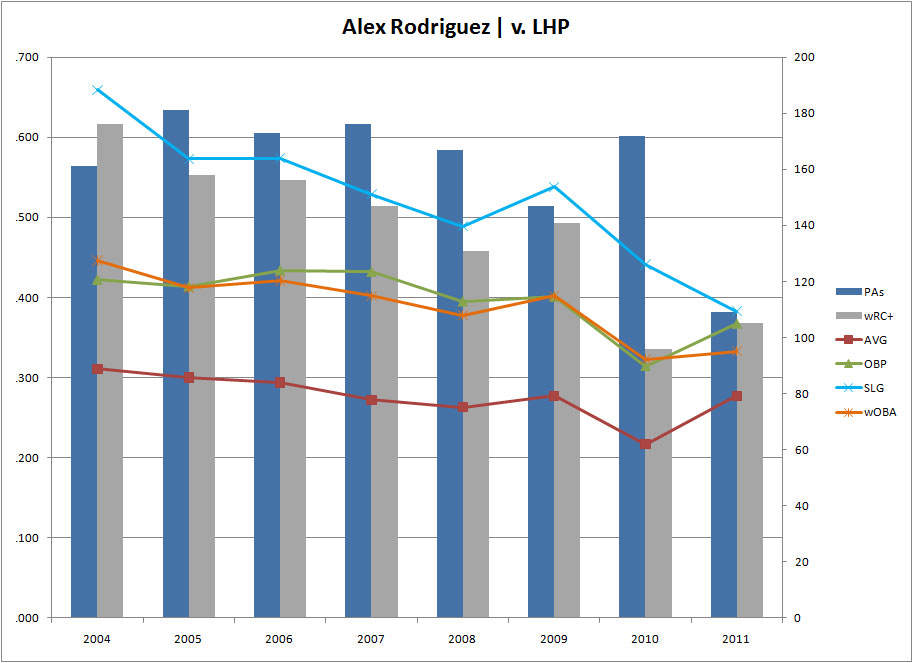 Last winter I dug into the numbers to figure out why that might have been, and concluded that Alex’s struggles against lefties appeared to be due in part to an uptick in cutters (7.2% of the time), two-seamers (15.3%) and changeups (16.1%) seen, none of which he handled particularly well last year.

My former co-writer at TYA, William J., followed my A-Rod post up with a comprehensive look of his own, and found that Alex’s struggles against lefties likely had something to do with his minuscule .212 BABIP, which probably was partially the result of his LD% against lefties falling from 26.4% in 2009 to 12.1% last season. William also dug a bit deeper and found that 26% of Alex’s plate appearances against lefties came against the AL’s elite southpaws — including David Price, Ricky Romero, Jon Lester and Cliff Lee, among others — and found that his production essentially decreased across the board year-over-year against the league’s best.

So how did Alex follow this (hopefully) one-year aberration in production against left-handed pitching in 2011? Well, for one, he managed to dramatically improve both his batting average and on-base percentage, and also bettered his 2010 wOBA v. lefties with a .333 mark, which actually made him a slightly above-average producer against southpaws (105 wRC+). Some of this was no doubt fueled by a .100-point-plus increase in BABIP against lefties to .316 in 2011 (which itself was the partial result of a rise in LD% back up to 19.2%). However, his ability to hit for power fell off a cliff (though as we saw in the second-half following his return from the DL, this wasn’t an issue exclusive to facing lefties), as he put up a mere .383 SLG against lefties in 2011. In fact, A-Rod only hit two home runs off left-handed starting pitching all season — one against Chris Capuano on May 21, and the other against former-Yankee-killer Brett Cecil on September 4.

The pitch selection against Alex varied (though it’s important to bear in mind that year-over-year PITCHf/x data is not the most reliable thing in the world, given the myriad misclassification issues that can arise, but as I don’t have time to manually reclassify questionable pitches we have to use the data that’s readily available), with the percentage of cutters and two-seamers down from 2010 (to 4.1% and 11.9%, respectively), which changeups ticked up slightly (17.4%). However, they remained rather effective weapons against Alex, as his batted ball results against these three pitches didn’t exactly improve:

As in 2010, a little over a quarter of his PAs against left-handers came against the league’s elite, as he stepped to the plate against Ricky Romero, Jon Lester and David Price 31 times over 7 games, and they continued to crush him, as he picked up a mere three hits against that trio.

Now, in fairness, Alex really didn’t look right after returning from knee surgery in late August — although the majority of his PAs against lefties came prior to his stint on the DL — so I’m willing to give him a slight pass on his late-season performance. Also, as previously acknowledged, this isn’t a perfect comparison, given that Alex’s number of PAs against lefties fell by 36% in 2011. However, I think we have enough of a sample to concur that A-Rod has definitely struggled against left-handers for two straight seasons, with the former seemingly due in part to some bad luck and the latter due to an inability to drive the ball.

It’s difficult to be terribly optimistic about Alex’s chances of a significant bounceback year after two straight injury-riddled ~.360 wOBA campaigns featuring diminished performances against pitchers he should in theory have a platoon advantage against. However, it seems like a 100% healthy A-Rod should be able to outdo a .333 wOBA against portsiders. At this point I suppose the biggest question is whether he can actually stay healthy.

What Went Right (And Wrong): Farm System
What Went As Expected: Mariano Rivera