The Yankees were, once again, a superb offensive team in 2011. It can be easy to take the team’s offense for granted considering how good Yankee fans have had it over the last decade. To wit (MLB rank in parentheses):

This table is absurd. The Yankees have been the best offensive team in all of baseball in terms of wOBA in five of the past 10 seasons, and after adjusting for park and league they come out on top in six of the past 10 years. Those numbers appeared poised to rise to six and seven years, respectively, as they led the AL in both wOBA and wRC+ as late as August 23, but a quiet offensive September combined with a lightning-hot Texas offense saw the team fall to third overall by season’s end. Still, in the few years they didn’t field the very best offense in baseball, they finished in the top three every season save one — 2008, when they finished 6th.

So yes, clearly we Yankee fans have been spoiled on the offensive front. I consider myself a pretty reasonable fan regarding most aspects of the game, although given the team’s embarrassment of offensive riches the one area in which I do occasionally veer into irrational territory is when they do things like get shutdown by Jeremy Guthrie. But that’s just me.

The point of this preamble is to acknowledge that trying to poke holes in the Yankees’ robust offensive attack is nit-picking at its best, but being the offseason and all I still find it interesting to compare and contrast how the team fared in a variety of splits. In the case of facing right-handed pitching — and especially in the aftermath of the Yankees’ ALDS loss to the Tigers, in which they saw zero left-handed starters — I thought it might useful to try to find out why the 2011 Yankees posted the team’s worst numbers against RHP in the last five seasons. 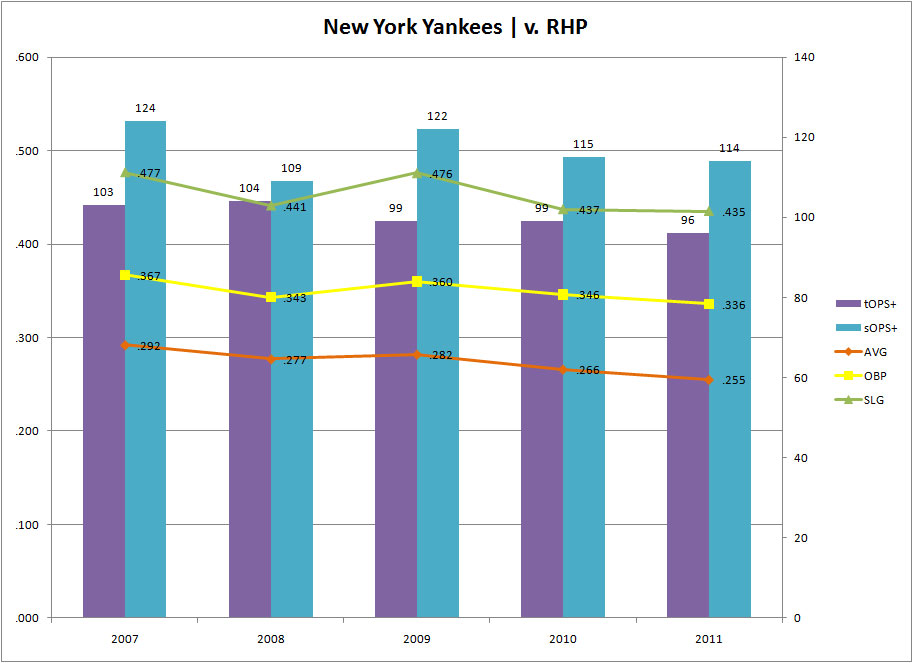 As you can see in the above chart, the 2007 and 2009 teams annihilated right-handed pitching, outhitting the league by 24% and 22%, respectively. The RHP decline began in 2010, and continued into 2011, as the team posted five-year lows in all three triple-slash categories vs. RHP as well as sOPS+.

They did continue to outhit the league, this time by 14%, so it’s not as if they were anemic vs. right-handers, but the platoon split is quite a bit more dramatic when you look at how they’ve fared against left-handers of recent vintage: 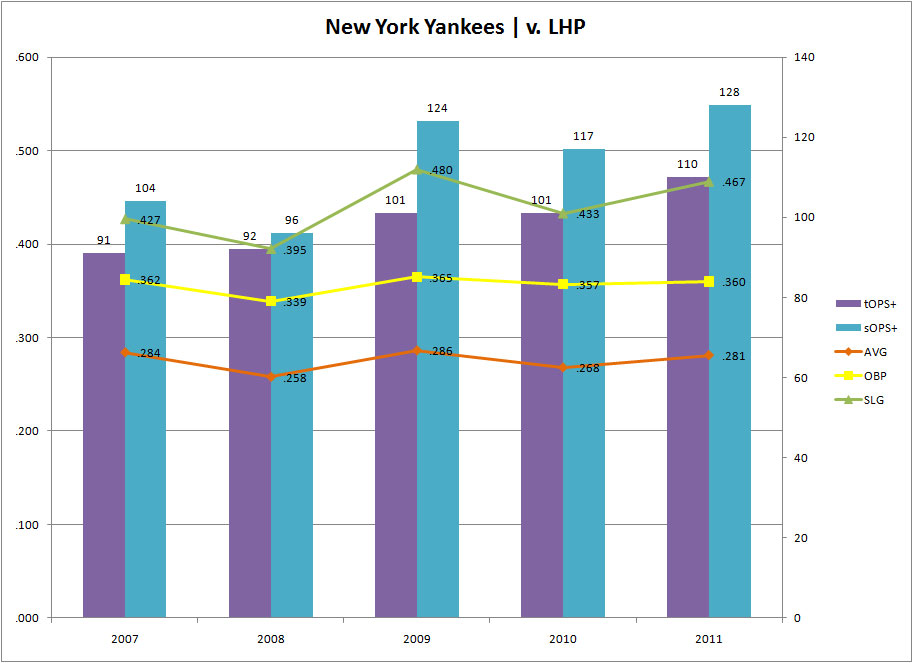 The Yankees utterly destroyed left-handed pitching in 2011, leading the Majors in both OBP and SLG vs. portsiders, and posting five-year highs in both sOPS+ and tOPS+, outhitting the league by a whopping 28%.

So why the slight drop-off against righties? Perusing the lineup’s splits, it’s not too hard to see why, as Mark Teixeira put up a .337 wOBA against northpaws (including a meager .323 OBP), Nick Swisher a .335 mark, Brett Gardner a .328 and Derek Jeter a .298 wOBA, though in fairness, Tex, Swish and Gardner were all above league average. Still, given that Tex and Swish are going to get the majority of their PAs against RHP, they have to be better than ~108 wRC+ players. Swish seems a decent-enough bet to bounce back, and he’s only a year removed from putting up a 132 wRC+ against righties.

I’m a little less sure about Tex, who’s on a three-year decline against righties, and, as the entire Yankosphere has noted in every way, shape or form, has to figure out how to fix his woes from the left side of the plate. Being that Gardner’s bat is invisible against lefties (75 wRC+), you’d ideally like him to be a bit better than average (101 wRC+) against righties, but I suppose you take what you can get from Brett. As for Derek, while it didn’t really end up negatively affecting the team — especially after his second-half renaissance — if Derek continues to struggle against righties the Yankees may actually be hurting themselves if Girardi refuses to move Jeter out of the one-hole against right-handed pitchers, as .277/.329/.338 is pretty much the exact opposite of what you want out of your leadoff hitter.

For as much as certain members of the offense are culpable, we also do need to give some credit to the pitchers the team faced. The Yankees had 4,434 plate appearances against right-handed pitching in 2011. Josh Beckett accounted for 136 of those, and threw 34 innings of 1.85 ERA ball against the Yanks. The Yankees had 150 PAs against James Shields, who pitched to a 2.33 ERA against the Yanks over 38.2 innings. Brandon Morrow faced 80 Yankees, and threw to a 1.74 ERA over 20.2 innings. Jered Weaver and Dan Haren combined for 113 PAs against the Yankees, with the former throwing 15 innings of 1.80 ball and the latter 15 2/3 innings of 2.30 ball. Heck, R.A. Dickey’s 1.64 was the lowest ERA against the Yankees (min. 2 starts) in 2011, and he accounted for 46 PAs. And of course, the enigmatic Phil Humber managed a 2.70 ERA over 13.1 innings and 50 PAs.

Those seven pitchers represented 13% of the Yankees plate appearances against right-handed pitching, and while that’s obviously only a small portion of the overall universe of right-handers faced, that these righties combined for an insane 2.06 ERA over their148.1 collective innings certainly had some impact on the team’s overall numbers against right-handers.

Using Baseball Musings’ Lineup Analysis tool, if you plug in the 2011 team’s most-frequently-used versus-right-handers lineup with their vs. right-handed pitching OBPs and SLGs, you get a lineup averaging 5.277 runs per game. If you use the team’s most-oft-used versus-left-handers lineup, and their vs. left-handed pitching splits, you get a lineup averaging an absurd 6.131 runs per game.

Now if we do the same exercise for the 2012 team, swapping Jesus Montero in for Jorge Posada/Andruw Jones, use the Major League Equivalencies for Montero’s 2011 AAA splits (using his actual September 2011 MLB splits isn’t helpful, given how insane his numbers were), and also sort the lineups by highest OBP to lowest, we get the following:

That above  lineup vs. right-handers would only score 4.958 runs per game, while the “best” version of that lineup would score 5.135 runs per game. However, if you want to swap Montero’s actual AAA split against RHP (.272/.330/.399) you get 5.106 runs per game, with the “best” version — featuring Gardner leading off, followed by Grandy, Swish, Cano, A-Rod, Tex, Martin, Montero and Jeter — at 5.258 runs per game, or basically what the 2011 version did against RHP. That’s actually a pretty reasonable lineup deployment, and if you factor in presumed improved seasons from Tex and Swish I’d expect a superior 2012 team performance against righties.

While the lineup probably doesn’t need any tweaking against southpaws, just for fun, the above lineup vs. left-handers averages an insane 6.002 runs per game, and the “best” iteration comes in at 6.285 R/PG. If you swap in Montero’s actual AAA split against LHP ( .328/.392/.647), you get 6.160 runs per game, with a “best” version pounding out 6.526 runs per game, and featuring Montero at cleanup! If things go as planned, we may actually be closer to experiencing that particular bit of awesomeness than previously thought.