In a series of Insider-only posts at ESPN, Dan Szymborski used his ZiPS projection system to break down the six division races using current rosters. Here are the links for the AL East, AL Central, AL West, NL East, NL Central, and NL West. No projection system is perfect or even close to it, but ZiPS has been consistently solid the last few years and is typically my go-to system. Standard disclaimer: Projections are not predictions, they’re an attempt to measure a player’s true talent level at the moment.

Anyway, the current Yankees roster is pretty bad. They don’t have Hiroki Kuroda, Andy Pettitte, an established closer, a legitimate starting catcher, a right fielder, or a bench. Plugging those holes internally means going with unproven youngsters and retread veterans, not the guys you expect to find playing everyday for the Yankees. Here are the projections… 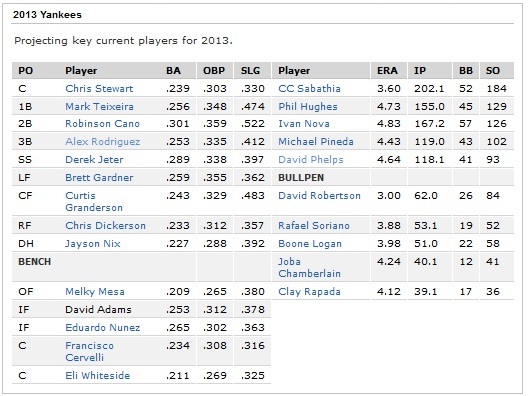 The projections for Mark Teixeira, Robinson Cano, Alex Rodriguez, Brett Gardner, and Curtis Granderson pass the sniff test. Derek Jeter’s might be a little light following his huge year, but it wouldn’t be a shock if his offense took a step back at his age. I like Chris Dickerson more than most, but that line is about right if he doesn’t have a platoon partner. Obviously the Yankees won’t carry three catchers, but that’s a function of the whole “current roster” thing.

On the pitching side, I would be pretty pleased with that performance from Pineda in his first year out of shoulder surgery. Over 100 innings with solid strikeout (7.7 K/9) and walk (3.3 BB/9) rates right after a major procedure like that? Yeah that would work. Obviously that’s not what the Yankees were hoping for when they made the trade, but the dynamic has changed in a big way since then. Accumulating some innings and showing flashes of his 2011 form are what I’m looking for out of Pineda next year. Nothing more.

ZiPS has that roster winning 85 games next year, good for second place in the AL East behind the 86-win Rays. The Orioles are a distant third at 80 wins, then the Blue Jays (78 wins) and Red Sox (76 wins) bring up the rear. The current incarnations of the Rangers, Nationals, and Braves project to finish with the most wins in baseball at 89 apiece. They have fewer holes to fill, especially compared to the Yankees. The fact that ZiPS still thinks New York can win 85 games with no real right fielder, no catcher, no number two or three starter, and a five-man bullpen is pretty neat. Too bad 85 wins would be a ten-win drop-off.