The Yankees 2013 offseason was “interesting,” to say the least.  It involved a couple big names departing to greener pastures Pittsburgh and Cleveland, and several apparent retreads joining the NY ranks in their stead.

Among these acquired castoffs was Vernon Wells, who the Yankees — in seeming desperation — elected to pay $13.9M over the course of the next two seasons (though the bulk of the money owed was front-loaded to 2013).  This was despite Vernon’s rash of injuries and meager .258 on-base percentage over the prior two seasons (apparently his 2011 .248 OBP was the lowest among all outfielders with at least 500 plate appearances since 1904 … so there’s that).  To put it mildly, most of us had our doubts about the deal on a lot of levels.

However, as John Sterling and Suzyn Waldman vehemently claim, “You simply cannot predict baseball!”  Wells had recovered from his varying ailments (a torn ligament in his right thumb most notably), he focused on improving his offensive production by applying a shorter, more direct swing — all of which would presumably be enhanced by the hitter-friendly confines of Yankee Stadium.

By mid-April, Vernon was batting in the heart of the order to the tune of .300/.366/.544 with six home runs.  He was looking like a rejuvenated version of his former self and an early Comeback Player of the Year candidate — all while inadvertently making Cashman look less like a ninja and more like a genius.

May has been somewhat of a different story though.  Consider the grid below, compliments of Baseball-Reference.

The numbers aren’t pretty, which is particularly hard to stomach considering he’s the guy often times backing up Robinson Cano in the lineup.  A quick glance at Vernon’s April and May spray charts (provided by Texas Leaguers) confirms what our eyes have witnessed these past few weeks: he’s been hitting into far more ground outs in May (23%) then he did in April (12.87%).  There have been far more ground outs hit towards the second baseman as well than there were last month – so it’s not like he is getting overly pull happy either (not that that would necessarily help him in NY). 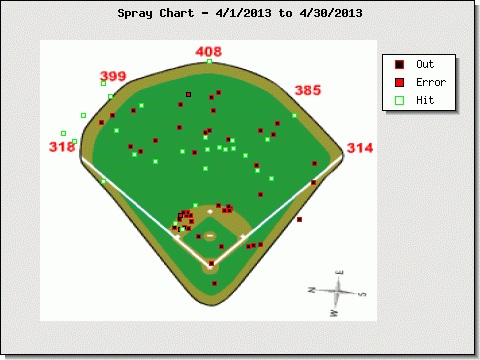 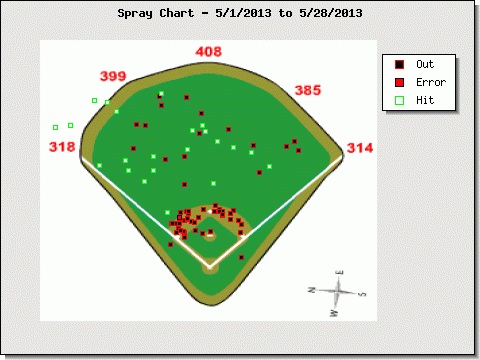 In terms of the ground outs, it’s possible some of his May struggles have been exasperated by an atrocious BAbip  (considering his career norm is .279).  I’m leery of over-simplifying BAbip to the term “luck,” but regardless of how one wants to define the stat, Vernon has certainly not been the benefactor.  Even if his stats do regress to what we’ve seen over the past few seasons from him, Vernon’s BAbip would still qualify as unusually low.  Eventually, some of these balls should get through the defense.  And considering that his recent struggles are by very definition inherently limited in sample size, it wouldn’t take much to get those numbers moving back in the right direction.

For what it’s worth, Texas Leaguers shows us that opposing pitchers will have thrown approximately the same amount of fastballs (fastballs including both two and four-seamers, cut fastballs, and split-fingered fastballs) by month’s end as they did in April.  As to be expected, the vast majority of the fastballs seen were four seamers, and in that particular category he’s been proportionately only a few percentage points less effective at putting the ball in play in May (24.5%) than he was in April (29.6% in play) — nothing super drastic — though it is worth noting that opposing pitchers have been throwing more for strikes this month than last.  The problem is the balls he is making contact with are simply not being hit well.

Anecdotally, there is also the possibility that his stance has opened up a bit again, thus resulting in longer swings.  This would result in less time to see (and swing at) the pitch, which could explain the uptick in weaker ground outs. Perhaps he needs to re-explore the adjustments he made in the offseason.  If he’s not seeing the pitches as well, it’d make sense that he’d be hitting the ball with less conviction more often.  This could be the kind of  “quick fix” solution that resolves itself overnight.  Unfortunately, that’s also the type of mechanical flaw that I’m sure both he and Kevin Long are constantly watching for and are proactively trying to prevent.  It also strikes me as weird that he could go suddenly to different ends of the spectrum against a certain type of pitch.

So where does this leave us?  Has Vernon turned back into the pumpkin (or worse) that most of us expected from day one, or is this just an unfortunate slump (that is being brought to attention a bit more than it probably should be given the team’s overall offensive struggles of late)?  Frankly, it’s too soon to make any meaningful conclusion.  At this juncture, this is merely an observation that’s worth keeping an eye on.  If we find ourselves watching a still-struggling Wells come the All Star break, we’ll probably know where things are heading though.  In the meantime, let’s hope get can keep it together at least until Curtis Granderson’s able to return.