A year ago at this time the Yankees were talking about getting younger, and they meant it. They made several trades designed to get younger last offseason, one of which brought Nathan Eovaldi to the Bronx in a five-player trade with the Marlins. The Yankees surrendered Martin Prado and David Phelps for Eovaldi, Garrett Jones, and prospect Domingo German.

Just a year ago Eovaldi led the NL with 223 hits allowed, and he’d been hittable his entire career, so it was fair to wonder how he would handle the transition to the AL. At the same time, Eovaldi was only 24 at the time of the trade, he has unteachable arm strength, and his FIP had gradually declined from 4.35 in 2011 to 4.13 in 2012 to 3.59 in 2013 to 3.37 in 2014. The Yankees are big believers in DIPS theory and in their eyes Eovaldi was trending in the right way. He wasn’t a finished product. Instead he was a ball of clay they could maybe mold into something special.

The Hope of Spring

Many of us got our first real look at Eovaldi during Spring Training. We knew the scouting report, we’d seen the stats and highlight videos, but watching a guy pitch in an actual game is a different animal. Eovaldi was excellent during Grapefruit League play, allowing four runs in 18.2 innings spread across four starts and one relief appearances. He allowed 14 hits, walked three, and struck out 20. I’m not sure you could have asked for a better showing in camp, but, of course, it was only Spring Training.

More Hits, More of the Same

The Yankees slotted Eovaldi into the No. 4 spot of the rotation and his first start of the season was fine. He allowed three runs on eight hits and one walk in 5.1 innings against what everyone assumed would be a high-powered Red Sox offense. Five days later he held the Orioles to two runs in five innings, and six days after that he had the kind of start that showed everyone why the Yankees coveted him.

Eovaldi held the Tigers to one run on eight hits and a walk in seven innings that night, striking out four. It was the kind of outing you wanted to believe was a sign of things to come. Eovaldi didn’t dominate, but he used his offspeed pitches effectively and pitched off his big fastball.

That wasn’t a sign of what was to come, however. Eovaldi allowed four runs on seven hits in 4.1 innings against the Mets next time out, and over the next seven weeks or so he was occasionally good, occasionally great, and occasionally mediocre. Little of everything. He’d show flashes of greatness but was mostly frustrating. Eovaldi had a way of leaving you wanting more.

Soon after Eovaldi showed up to Spring Training, pitching coach Larry Rothschild went to work fine-tuning his mechanics and repertoire. He introduced a splitter, which Eovaldi tinkered with on and off in camp and into the regular season. Following that disaster start in Miami, Eovaldi began to lean on the split a bit more often. 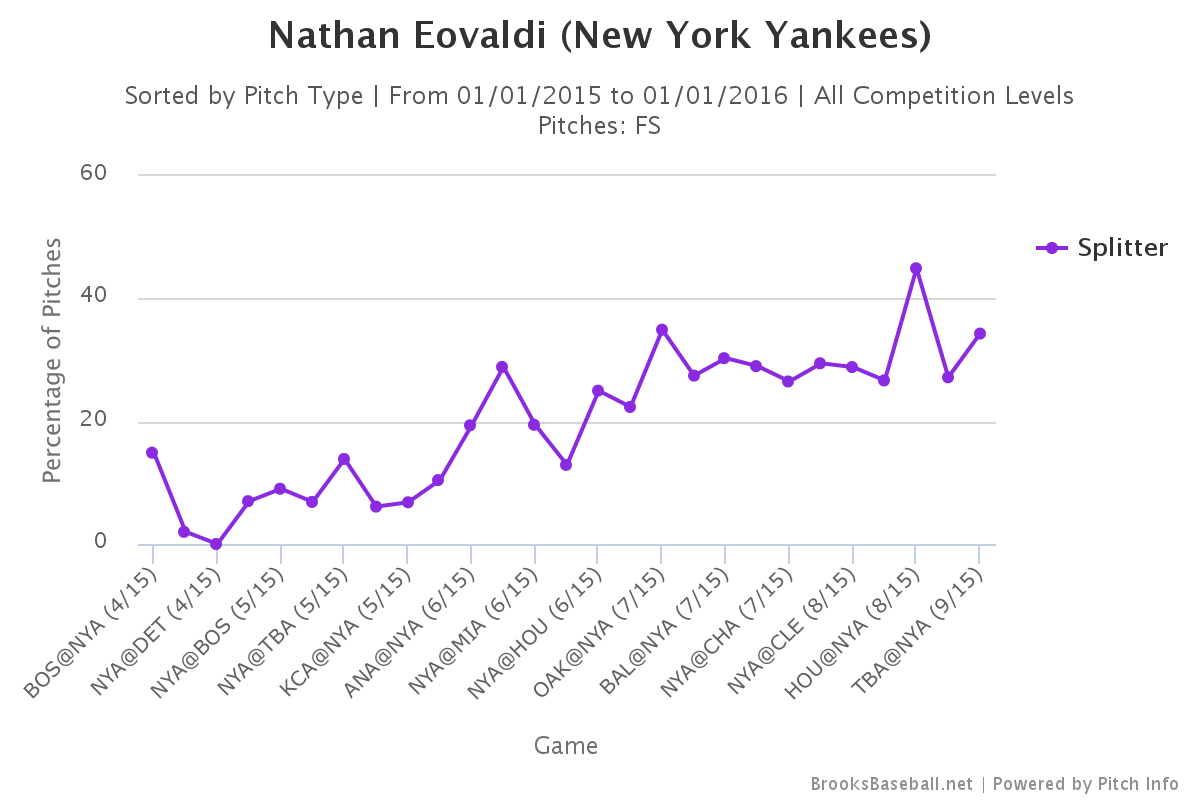 The results were rather remarkable. Eovaldi allowed two runs or less in six of the seven starts immediately following the Marlins game, and, more importantly, opponents only hit .245/.295/.265 in 41.1 innings in those seven starts. The hits weren’t coming as often (38 allowed in those 41.1 innings) and his strikeout rate increased a bit to 18.1%.

The splitter gave opposing hitters something else to think about. Eovaldi has a tremendous fastball, regularly flirting with triple digits — at 96.6 mph, he had the hardest average fastball among starters in 2015 — but he didn’t have a quality secondary pitch hitters had to respect. They could zero in on his fastball and take advantage no matter what the radar gun said. The split-finger was the off-balance pitch Eovaldi needed.

The splitter helped Eovaldi post an improved strikeout rate (18.8%) and ground ball rate (55.7%) during those 12 starts, and while his walk rate (7.9%) increased, it was still better than the league average. Once he began to use the splitter more often, Eovaldi was so much more effective in the summer months. He wasn’t an ace but he was reliable and arguably the team’s best pitcher for a stretch of several weeks.

Eovaldi struggled a bit in back-to-back starts on August 30th (five runs in five innings against the lowly Braves) and September 5th (three runs in 5.1 innings against the Rays with four walks), and perhaps not coincidentally, he was shut down with elbow inflammation shortly thereafter. An MRI showed no structural damage and the plan was no throwing for two weeks.

Because he was shut down in the season’s final month, Eovaldi never did return to the mound after that September 5th game. He was shut down for two weeks, then started a two-week throwing program that extended into the postseason. Eovaldi threw a simulated game on the day between the end of the regular season and the wildcard game and was all set to be added to the ALDS roster as a reliever had the Yankees advanced. (Reliever because there wasn’t enough time to stretch him out as a starter.)

The elbow injury really stunk, the Yankees could have used the new splitter-happy Eovaldi down the stretch, but at least he was healthy enough to join the ALDS roster had the team advanced. That’s the silver lining. Eovaldi finished his first season in New York with a 4.20 ERA (3.42 FIP) in 154.1 innings. His strikeout (18.0%) and walk (7.3%) rates were lower than the league average but his ground ball rate (52.2%) was very good. His home run rate (0.58 HR/9 and 7.8 HR/FB%) was excellent.

Among the 89 pitchers to throw at least 150 innings in 2015, Eovaldi ranked 31st in fWAR (3.2) and 46th in bWAR (2.3), putting him right in the middle of the pack. It was an uneven season for him, for sure. The start wasn’t so good, the middle was great, and the end came quicker than expected because of the injury. That he took so well to the splitter was encouraging.

That split-finger fastball started as a forkball. Teaching a pitcher a new pitch isn’t always as simple as showing him a new grip and making him throw it in the bullpen. Splitters are complicated because the fingers are spread so far apart, so, in an effort to get Eovaldi used to the grip, Rothschild had him start the season throwing a true forkball before shortening up to a tradition splitter grip.

Here’s a before and after photo of Eovaldi’s forkball and splitter grips. The forkball is on the left, the splitter is on the right.

Eovaldi’s fingers are much more spread apart in the left photo. You can tell that from the seams of the ball — his index and middle finger appear to be on the white of the baseball, next to the widest part of the horseshoe. In the right photo his fingers are on the seams, but the horseshoe is out beyond his fingertips, not choked back. It’s a small difference that apparently makes a big difference.

Not only did Eovaldi get some more action on the ball with the splitter grip, he also got more velocity. We don’t know when exactly he changed grips, but boy, look at his velocity chart, and it’s hard not to notice it jumped from mid-80s to hovering around 90 mph in the middle of June one day. 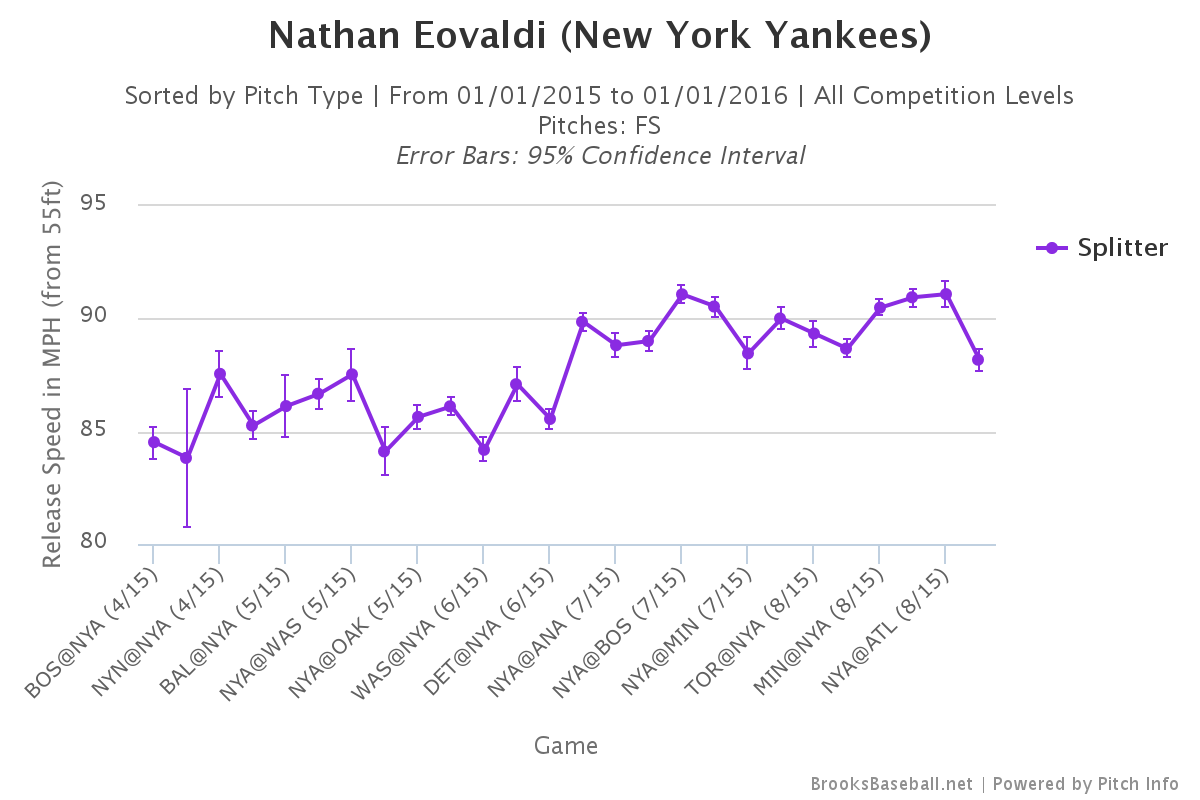 The splitter velocity spike neatly cuts his season in half — Eovaldi made 14 starts with the mid-80s forkball and then 13 with the 90 mph splitter. I assume that’s when he changed grips, but who really knows. Here’s a before and after look at that split-finger pitch.

It’s almost like Eovaldi added an entirely new pitch. He threw it nearly three times as often in the second half, it had four miles an hour more velocity, and it tumbled an additional three inches or so. (Negative horizontal movement means it broke in on righties and away from lefties.) That’s a big difference!

Clearly Eovaldi is not a finished product. He was always going to be a long-ish term project for Rothschild, and the fact his splitter went from unused pitch to legitimate weapon this season is a huge step forward. Next year he can work on other stuff like fastball command and his slider and curveball. At least now Eovaldi has a second weapon he can use. He’s not just a fastball guy anymore.

Eovaldi is under team control as an arbitration-eligible player for another two seasons — MLBTR projects a $5.7M salary next season — and while he is among the team’s better trade chips, the elbow injury at the end of the season puts a damper on things. I wouldn’t ever rule out a trade, but, right now, it appears Eovaldi is ticketed for a rotation spot next year as the Yankees hope he will build on his midsummer success.