River Ave. Blues » CC Sabathia: The Solid Mid-Rotation Starter [2017 Season Preview]
Gleyber Torres could help the Yankees in 2017, but a few things need to happen first
What does Statcast's catch probability tell us about Jacoby Ellsbury and Brett Gardner?

A bit over a year ago, CC Sabathia’s job security was very much in question – and for good reason. From 2013 through 2015, the former ace pitched to a 4.81 ERA (121st among 132 qualified SP in that stretch, and 20% below-average) and 4.40 FIP (118th, 7% below-average), and missed time due to injuries, poor performance, and alcoholism (for which he sought treatment after the 2015 season). Joe Girardi and Co. were open in their discussions of the fifth starter training camp battle between Sabathia and Ivan Nova, and there seemed to be a very real chance that the big man would open the season in the bullpen.

That didn’t happen, of course, and the Yankees were rewarded with a rock solid campaign from Sabathia. Heading into the 2017 season, he once again feels like an integral piece to the rotation. How did we get here?

Lest We Forget, We Almost Didn’t

It was only four starts, but Sabathia was bad in April (21.1 IP, 25 H, 11 BB, 15 K, 5.06 ERA, 4.04 FIP), and the calls for him to head to the bullpen grew louder. The aforementioned Nova threw four strong innings in relief in the second game of the season, Sabathia was decidedly mediocre in his first start, and the memories of the Spring Training competition were still fresh. Had it not been for Nova imploding in two of his next four appearances, I still wonder if he would have ended up switching places with Sabathia.

The calendar turned to May, and Sabathia rediscovered his mojo. Over the next seven starts, he posted three scoreless outings, pitching to the following line: 44 IP, 29 H, 16 BB, 41 K, 0.82 ERA, 2.94 FIP. And he looked good doing it, as he allowed just one home run and worked his way out of jams like the Sabathia of old.

There were plenty of signs that this wasn’t sustainable, including a 4.20 xFIP, 90.3 LOB%, and 2.4% HR/FB – but that didn’t stop most of us from buying in, at least a little bit. Sabathia’s name popped-up in All-Star discussions, and it felt as though the Comeback Player of the Year award was made with this sort of circumstances in mind. A backslide was all but certain to come, yet watching him dominate was a sight for sore eyes. And maybe, just maybe, a corner had been turned.

This is how it looked in graph form: 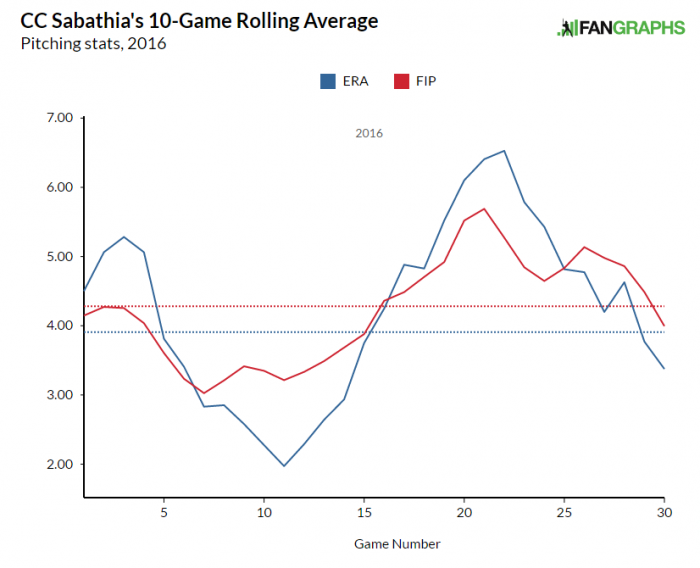 And, as was the story of his three previous seasons, his successes and failures were tied closely to gopheritis: 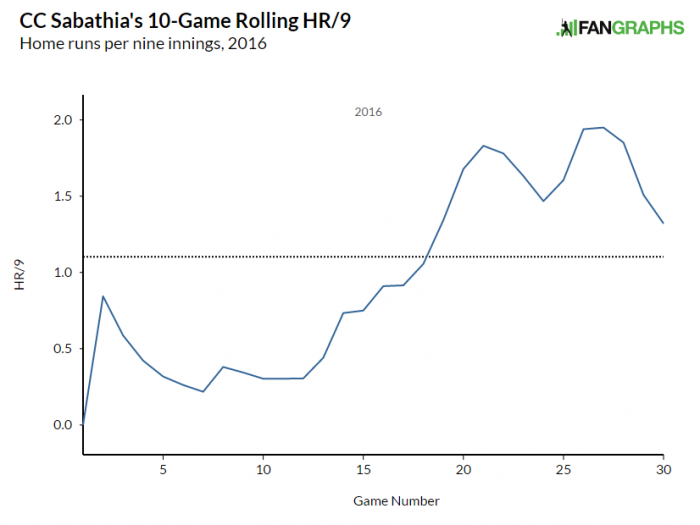 Things weren’t looking so hot in the dog days of summer. Until…

On August 23, Sabathia dominated a stout Mariners lineup (one that finished second in the Majors in wRC+ in 2016) for seven innings, allowing just 3 hits, 1 run, and 1 walk, while striking out seven. That was the start of a fine closing stretch to the year, over which he tossed 49.1 IP of 2.37 ERA ball with above-average peripherals (21.4 K%, 7.1 BB%, 54.3 GB%). His final start was an exclamation point on that stretch, as he held the Red Sox to 1 run and 6 base-runners in 7.1 IP, striking out 8 – including David Ortiz swinging in the second inning.

To this point, my post is more of a 2016 review than a 2017 preview. That is a bit necessary, though, as it is demonstrative of the ups and downs that an aging pitcher faces. It also serves as a reminder that Sabathia was back to being a revelation at season’s end, even if his year was almost equally split between awesome and awful, with little in between.

Now, onto the meatier portion of the preview.

How Did He Do It?

What stands out the most about Sabathia’s season – aside from his actual statistics – may be best explained in graph form. To wit: 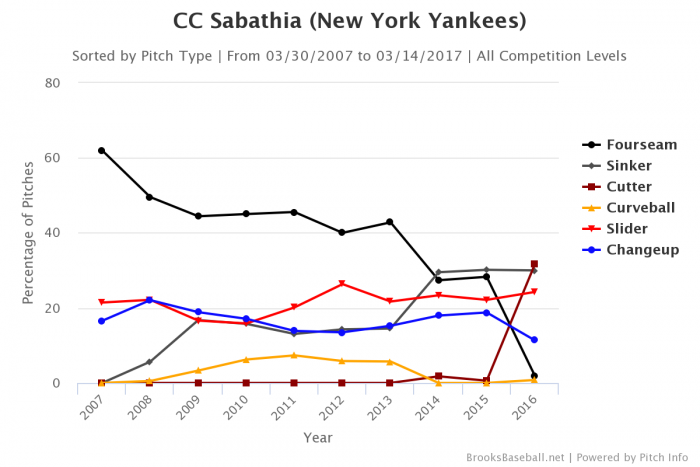 Sabathia also induced the second-best groundball percentage of his career (50.1%, compared to a league-average rate of 44.7%), and allowed his lowest hard contact percentage since 2011 (24.7%, versus the 31.4% league-average). His .288 BABIP was also his lowest in several years, but it wasn’t unsustainably so (the league-average was .298) – particularly when you factor in the grounders and weak contact.

There are also two factors that we can’t quite quantify – his adjustment to his new knee brace, and the recovery from alcoholism. Sabathia spent the entirety of 2016 adjusting to wearing a knee brace (and switching to a heavier at one point), and his ailing, balky knee played a large role in his struggles from 2013 through 2015. We don’t know exactly how alcoholism effected everything … but I’d be remiss to say anything less than sobriety is a good thing, and we should all be happy for Sabathia.

The projection systems are bearish on Sabathia, with ZiPS (4.57 ERA, 1.5 fWAR) and PECOTA (4.79 ERA, 0.6 WARP) seeing him slip back into his pre-2016 form. That isn’t terribly surprising, given his age, injury history, and three years’ worth or struggles, but there does appear to be tangible reasons to expect him to be closer to what we saw last year. Splitting the difference between 2015 and 2016 would leave him as a roughly league-average starter (98 ERA+), which represents my pragmatic prediction; and the Yankees and their fans should be happy with that.

Gleyber Torres could help the Yankees in 2017, but a few things need to happen first
What does Statcast's catch probability tell us about Jacoby Ellsbury and Brett Gardner?