River Ave. Blues » The Frustrating Chase Headley [2017 Season Preview]
Shortstop depth gives the Yankees a chance to develop the super utility player they've been seeking
The White Sox are scouting the Yankees for a possible Jose Quintana trade, because of course they are

To say that Chase Headley’s first full season in pinstripes was a disappointment would be something of an understatement. Fresh off of a solid 123 wRC+ and stellar 2.8 fWAR in 58 games with the Yankees in 2014, expectations for Headley were at least a bit high – and the resultant 4-year, $52 MM contract that he inked that off-season didn’t help matters. He responded with, as Mike detailed this time last year, the worst season of his career, posting his lowest wRC+ ever, and his worst WAR since moving to third full-time after the 2009 season.

The existence of Jacoby Ellsbury prevented Headley from becoming the focus of the Yankees fanbase’s collective ire, but there was quite a bit of discussion about the three years remaining on his deal, and Rob Refsnyder learning the hot corner was far more newsworthy than it otherwise would (or should) have been. I wouldn’t go so far as to say that 2016 was a make or break year – in hindsight or otherwise – but the word ‘albatross’ was thrown around at least a bit.

And Headley, of course, responded with a borderline carbon copy of his 2015 season in the batter’s box:

Even with an improved walk rate and a bit more pop, Headley remained a below-average hitter (comfortably below the positional wRC+ of 106 in 2016), ranking 21st among qualified third basemen in wRC+. This may just be who he is as he enters his age-33 season, but there are some positives beneath the surface.

He Remembered How to Play Defense

The worst aspect of Headley’s 2015 was his defense. The former Gold Glover made 23 errors, nearly doubling his previous career-high of 13 (set in his first year at the position), posting a fielding percentage twelve points below the league-average. Twenty players qualified for the Gold Glove at the hot corner in 2015, and Headley ranked 15th in Defensive Runs Saved 15th in UZR/150, 19th in fielding percentage, and 20th in errors (with career-worst marks across the board). And, given the lasting impressions of his throwing issues and the agreement between advanced and old-fashioned metrics, he was just as bad as those numbers suggest.

Last year represented a defensive about-face for Headley, as he improved across the board to a staggering extent. If you prefer basic statistics, he made 13 fewer errors, and improved his fielding percentage from .946 to .974. If advanced metrics are more your speed, his DRS jumped from -6 to 7, and his UZR went from -3 to 6.6.

Put simply, he looked far more comfortable at the position (and much more like the guy that the Yankees acquired in the Summer of 2014).

What About His Bat?

Things started to improve dramatically from there, and Headley swung a hot bat for the next two and a half months. Selective endpoints are tricky, to be sure, but he batted .293/.360/.482 with 10 HR (127 wRC+) from May 12 through the end of July, and hopes started to rise. 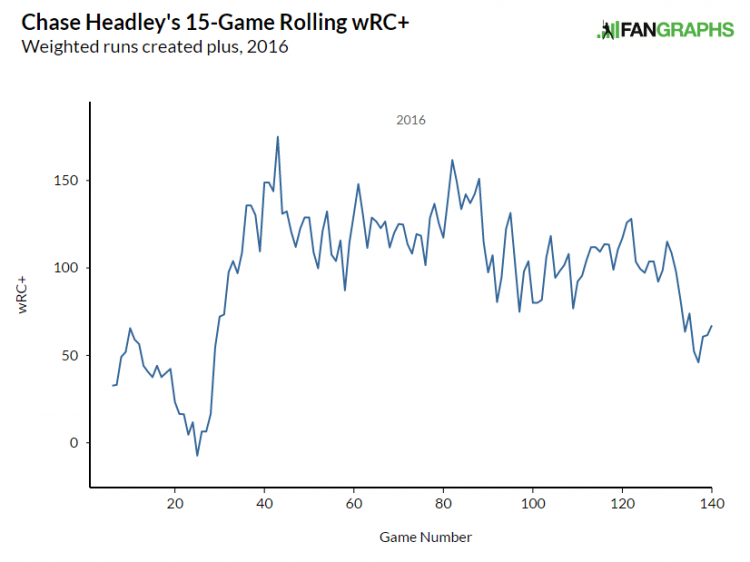 His 2016 breaks down as an awful month and a half, two and a half very good months, and two well below-average months … which is actually quite similar to his 2015 (even if the order is a bit different): 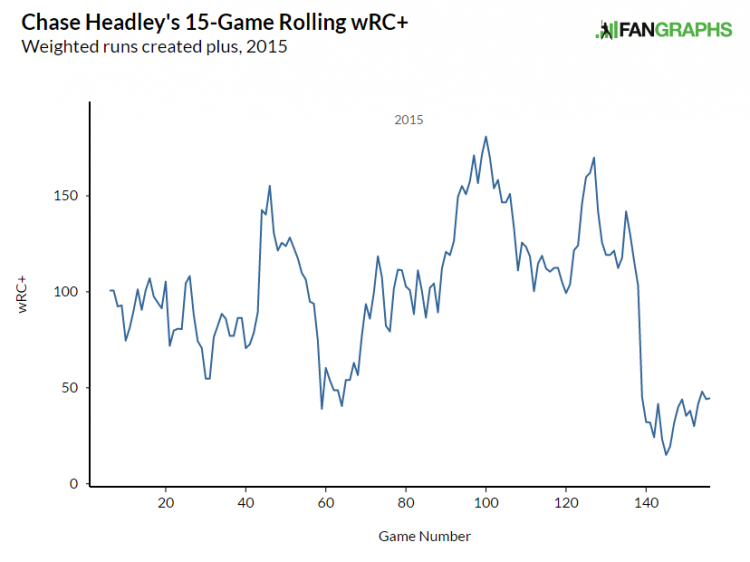 So where are those positives that I mentioned?

As I mentioned earlier, Headley’s walk rate improved by 1.7 percentage points, and his ISO jumped from .110 to .133. Both marks are skewed somewhat, as league-averages jumped, as well, but Headley’s improvements were notable nonetheless. He also started running the bases again, picking up 8 SB and adding 3.9 runs per BsR, which is something that he simply didn’t do in 2015. And most everything else (including his swing percentages) eked closer to his career norms.

If we buy into Headley’s sustained mid-season hot streak and the signs that he’s trending back towards his career norms, it stands to reason that he could bounce-back to being a league-average hitter. Interestingly enough, PECOTA sees something that suggests a modest improvement, projecting a .251/.333/.400 slash line with 16 HR, good for a .259 TAv. For reference, a .260 TAv is average, and Headley’s marks in 2015 and 2016 were .245 and .248, respectively.

It’s certainly reasonable to expect Headley to continue to play defense at a high level, and I think he’ll do that. And if his bat can find its way into league-average territory – which I remain split on – he could be a 3 win player in 2017. I’d be thrilled with that, and I’m sure the Yankees would be, too.

Shortstop depth gives the Yankees a chance to develop the super utility player they've been seeking
The White Sox are scouting the Yankees for a possible Jose Quintana trade, because of course they are