We are now a bit more than forty-eight hours removed from the worst start of Masahiro Tanaka’s stateside career. That distinction is not necessarily hyperbole, mind you, as it represents his lowest Game Score (11) in pinstripes, as well as the most earned runs (7) he has allowed in a single game. Prior to Sunday’s outing, that ignominious title went to his September 27, 2014 start against the Red Sox, when he pitched to the following line: 1.2 IP, 7 H, 7 R (5 ER), 2 BB, 2 K, 17 Game Score. That was in Fenway Park (a much more hitter-friendly park), albeit against what amounted to their second-string lineup. I leave it up to you to determine which was worse.

Prior to delving into the details of his Opening Day start, allow this to serve as a disclaimer – this is a sample size of one game. As much as I’d love to dial up the snark and drudge up memories of the defunct “What’s Wrong With Mariano Week” tradition, it’s simply too early to do that. If he struggles his next time out, however…

All that being said, the first place to look is velocity. We know that many (if not most) pitchers gain velocity as the weather begins to warm up, and muscles, tendons, and ligaments are loosened back into game shape. It should never come as a surprise when a pitcher’s fastball is lacking a bit of pep in the early goings as a result. In this case: 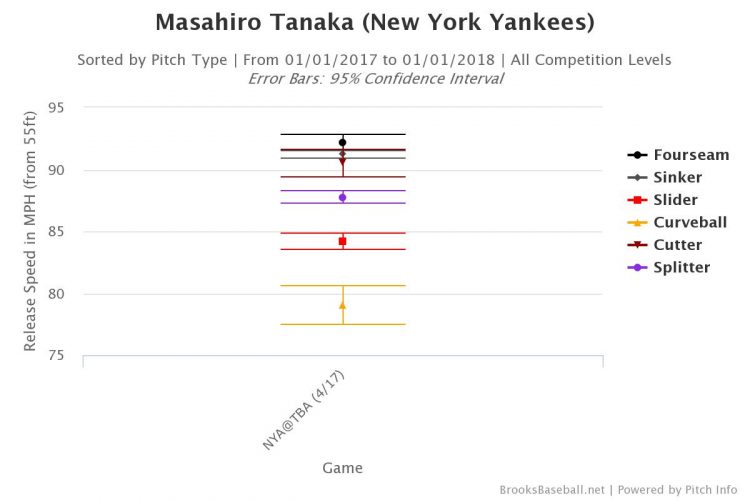 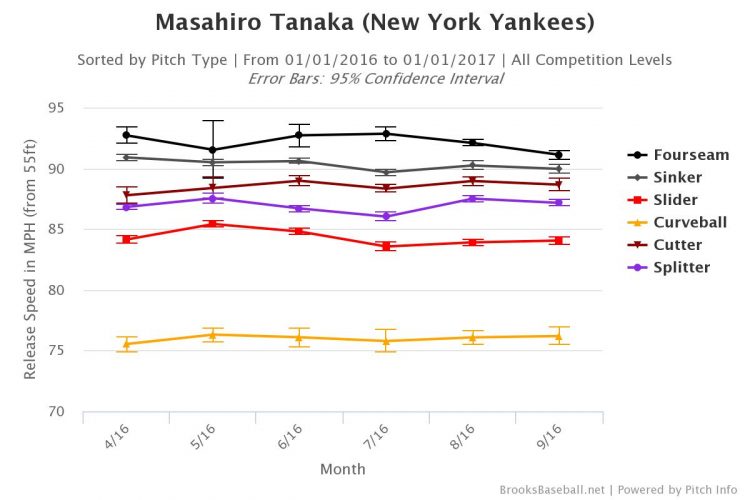 It’s not all that different. In fact, the velocity on every pitch but his curveball was up on Sunday, as compared to his 2016 season as a whole. And it’s worth noting that his fourseamer averaged 90.25 MPH and 90.72 MPH in his first two starts last season, too.

If velocity wasn’t an issue, perhaps it was pitch selection. Take a look at Tanaka’s mix from Sunday: 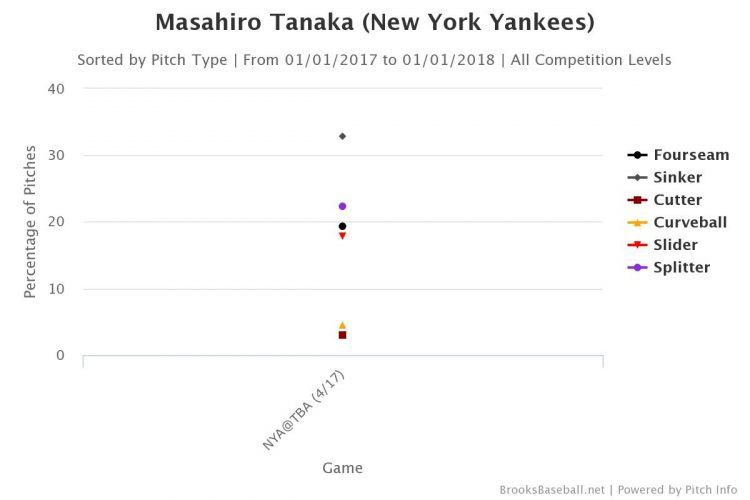 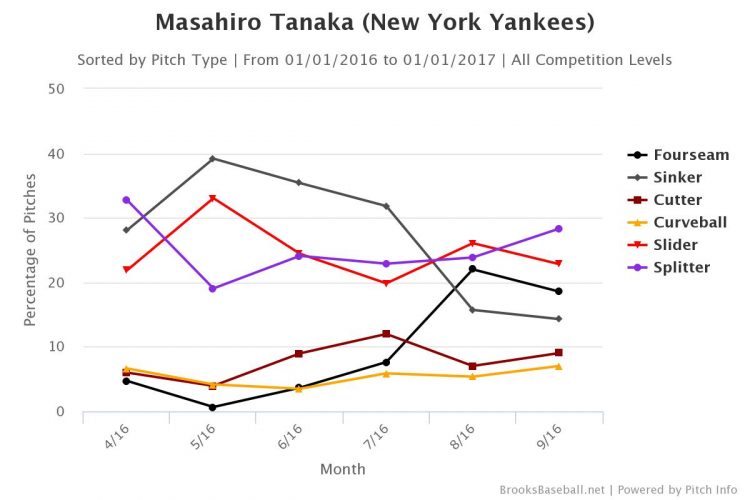 Painting in broad stokes, Tanaka’s pitch selection has been all over the place. It’s even more glaring on a start-to-start basis, which makes it difficult to glean much of anything from it. This may be a simple matter of Tanaka going with whatever feels the best on any given day, which isn’t terribly surprising for a pitcher with such a diverse repertoire.

What about his location?

The majority of his pitches were thrown on the edges of the strikezone (if not outside), so it isn’t as if he was grooving everything down the middle. That didn’t stop the Rays from hitting him hard, though, as his 53.8% hard contact percentage allowed was more than 20 percentage points above his career norm.

If there is an explanation for this, aside from small sample size bad luck, it may well be that the horizontal movement on his pitches was far removed from the norm: The differences are fairly dramatic across the board (and this is true on a start-by-start level, too), which may have resulted in pitches drifting into the sweet spot of the bat more often than pure location would show us. Or it may have meant that Tanaka’s mechanics were a bit off, leading him to tip his pitches. Or it could mean that he was experimenting with new grips. Or it could mean that BrooksBaseball is way off. The possible explanations are essentially endless.

In the end, it simply boils down to a bad start (a shocker, I know). He didn’t leave too many pitches over the middle, but those that he did were hammered – Logan Morrison’s home run came on a pitch right down the middle, for example, and Evan Longoria’s bomb was off of a splitter that caught way too much of the corner. These things happen. That is a small comfort, to be sure, but silver linings abound, with his velocity and movement appearing to be quite strong.

Here’s hoping he puts it back together next time out.

Why Chris Carter should be the Yankees starting shortstop
Game Two: Okay, Let's Try That Again