No pizza but still a win
The Yankees headed out west for the first time this season, but the story remained mostly the same on Monday night: another win and another legend-boosting performance by Mr. Judge.

This victory, however, was different from others in the past couple weeks because of the fact that John Sterling and Suzyn Waldman didn’t get to mention the beloved Papa John’s promotion. In case you’re not familiar with the popular deal: the day after the Yankees score six or more runs, customers get 50 percent off the regular menu price of all pizzas at Papa John’s online.

The Yankees scored ‘only’ five runs on Monday night, but that was still enough for the win because of another anomaly: Masahiro Tanaka did not get pummeled! Though he did cough up a solo homer to the second batter of the game, he settled down after that, retiring 13 straight at one point while pitching into the seventh inning.

One of the biggest keys for Tanaka was getting ahead in the count, throwing a first-pitch strike to a season-high 77.8 percent of the batters he faced. Because he was consistently in control of at-bats, he was then able to efficiently finish off batters when getting to two strikes, as the Angels went 0-for-11 in two-strike counts with eight strikeouts.

Okay, so back to the part of this game that was normal – Aaron Judge destroying baseballs. With the game tied in the eighth inning and a man on second, Judge drilled a 2-0 cutter from Bud Norris over the fences for a 5-3 lead. Sorry Buddy, this is not the best location for a pitch when facing a 6’7, 280-pound baseball cyborg: 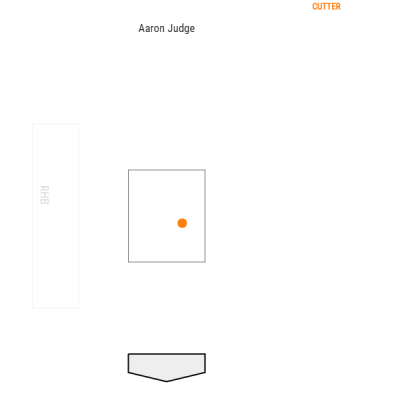 I wouldn’t be surprised if Judge was literally smiling as he extended his arms and pummeled this pitch into the right-centerfield seats. It was right in his power-happy zone, as he was slugging 1.182 in that part of the strikezone after Monday’s game. 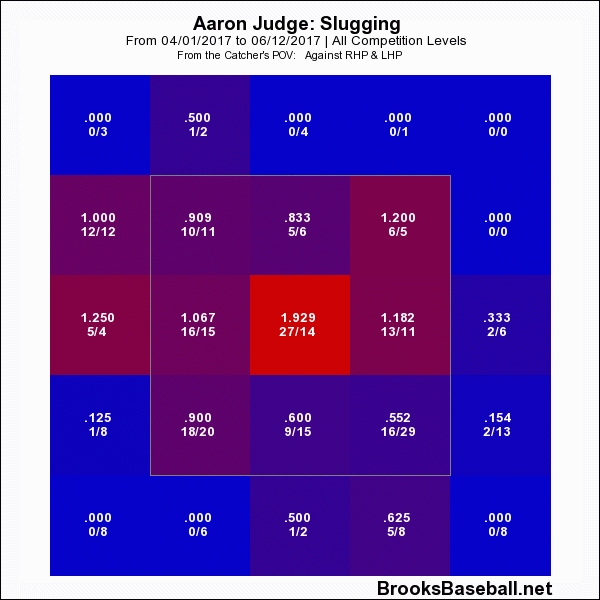 It was his first career go-ahead home run in the eighth inning or later … and hopefully the first of many more to come.

Judge wouldn’t have been the hero, though, without another standout performance from Didi Gregorius. He went 4-for-4 and kept the Yankees in the game with game-tying and go-ahead RBI singles in the third and fifth innings. Didi was the second Yankee shortstop ever with a four-hit, multi-RBI game against the Angels. The other guy to do it was … of course, Derek Jeter on Sept. 5, 1999 at Angel Stadium.

Clipp’d
The Yankees six-game win streak was snapped on Tuesday in one of the more frustrating losses of this season, as they lost in the 11th inning after failing to cash in on key scoring chances throughout the night. It was also a rare type of loss for a couple reasons:

Tyler Clippard was the game’s biggest goat – according to Twitter, at least – as he surrendered that game-tying homer and was tagged for his fourth blown save of the season in his 29th appearance. Through Tuesday, the only pitchers in the majors with more blown saves were Tony Watson and Francisco Rodriguez (both with 5).

Fangraphs tracks a stat called Meltdowns, which answers the simple question of whether a reliever hurt his team’s chance of winning, based on changes in win probability during the pitcher’s outing. (To be more specific, he gets a Meltdown if the game’s win probability declines by at least six percent from when he enters and then exits the game.) Clippard has eight Meltdowns this season, tied for the most among American League pitchers and fourth-most in MLB.

Clippard has a shiny 2.00 ERA and .158 batting average allowed, but he’s been horrible in critical at-bats this season. He’s allowed a .304/.375/.682 line in high-leverage plate appearances – that equals a .436 wOBA, which ranked seventh-highest among pitchers that have faced at least 25 batters in those situations. For reference, Aaron Judge had a .476 wOBA through Tuesday.

As if the game wasn’t depressing enough from a standard win-loss perspective, there’s also the fact that CC Sabathia suffered a hamstring injury in the fourth inning. He had won his last five starts, with a 0.99 ERA dating back to May 16 at Kansas City. During that month-long span (May 16 to June 13), a total of 161 pitchers threw at least 15 innings; Robbie Ray (0.24) and Sabathia (0.99) were the only ones to post a sub-1.00 ERA.

Welcome back, Tiny Mike
This annual road trip to Southern California has been a devastating one for this franchise, even in the best of times. After dropping the rubber game on Wednesday, the Yankees continued their run of futility in Los Angeles (or Anaheim, whatever). The Yankees fell to 45-58 at Angel Stadium in the Wild Card Era, their worst record at any AL ballpark in that span.

It looked like they might reverse that trend after taking a 4-0 lead in the top of the first, capped by Gary Sanchez’s booming 441-foot three-run homer. It was the Yankees 11th home run of at least 440 feet this season, the most in the majors.

Unfortunately that early offensive explosion was quickly rendered meaningless as #BadMike returned with vengeance. He soon turned that 4-0 advantage into a 5-4 deficit by the end of the third inning. Pineda ended up pitching six innings and gave up five runs on 10 hits, further widening his Jeykyll-and-Hyde home/road splits this season:

He is now 1-5 with a 6.25 ERA in six road starts, compared to 6-1 with a 1.96 ERA in seven home starts. That difference of 4.3 runs is the ninth-largest among the 100-plus pitchers that have made at least five starts at home and five starts on the road.

2017 Draft: Yankees grab several top prospects on Day Three, but will they sign any of them?
6/15 to 6/18 Series Preview: Oakland Athletics