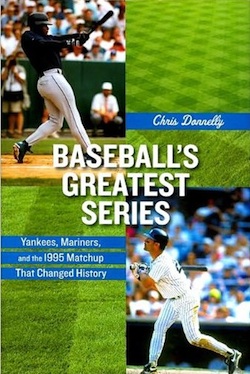 When I was 12 years old, the Seattle Mariners broke my heart. A perfectly-placed double by Edgar Martinez in the bottom of the 11th inning on a Sunday night in early October sent the Yankees home after a thrilling ALDS. It was the first Yankee playoff appearance of my life, and while the memories of it would be erased by a half a decade of World Series dominance, it was a crushing, stinging defeat for this young baseball fan.

Now, that series with Ken Griffey’s tremendous display of power, David Cone’s gutsy pitching, the emergence of Mariano Rivera, Don Mattingly’s last hurrah, the Martinezes’ — Edgar and Tino — constant bludgeoning of the Yankees and, of course, Randy Johnson’s relief appearance, has been immortalized by Chris Donnelly in a wonderful new book. Called Baseball’s Greatest Series, Donnelly explores how the 1995 ALDS match-up between the Yankees and the Mariners, in his words, changed history. It brought about key changes in New York that led to a dynasty and saved baseball as we know it in Seattle.

What most Yankee fans sitting 3,000 miles away from Seattle know about that 1995 series concerns the way it changed the Yankees. The Yankees left New York up 2-0 on the Mariners and had to return east losers of three straight, the first of the three great Yankee collapses during their magical dynasty run. That loss — with the shaky John Wetteland in the bullpen, with Mariano Rivera underutilized, with Jack McDowell on the mound, with a tight and tense Yankee clubhouse and a cantankerous owner — led to the ouster of Buck Showalter and the dawn of a new day. Getting to that point, though, was a battle.

Donnelly begins his tale in New York with a history of the Yankees from 1981 to 1995. It is a sad tale and one we’ve told in bits and pieces this winter. George Steinbrenner turned from a crazy win-now owner into a meddlesome and obsessed win-at-all-costs-yesterday owner. The Yanks fell just short of the playoffs in 1985 and couldn’t recover for nearly a decade after Steinbrenner was suspended from baseball and the Yanks’ baseball minds could put together a better team.

Necessarily, the New York part of the story focuses on Don Mattingly. A lynch pin for the Yanks throughout the 1980s and early 1990s, by 1995 he was a shell of his former self, and that 1995 ALDS was his only playoff appearance as a player. Mattingly hit .417/.440/.708 in his last games as a Major Leaguer, but with the likes of Dion James, Randy Velarde, Tony Fernandez and Ruben Sierra all faltering behind him, it wasn’t enough.

In Seattle, meanwhile, the story is more vital for the Mariners. While the Yanks’ loss led to a dynasty, the Mariners’ victory ensured the Pacific Northwest that baseball would survive there. Prior to 1995, the Mariners were a sad franchise that never enjoyed much success. They played in a dreary dome that remained mostly empty for decades, and as 1995 dawned, the team needed a new stadium or they would decamp for Tampa Bay.

As the Mariners climbed back from a late-season 12-game deficit to make the playoffs, Seattle became, in the span of one year, a baseball town. The story ends not with a Mariners’ loss to the Indians in the ALCS, but with a new stadium for the team and a decade-long rivalry with the Yanks. As hard as it is to believe now, but the Mariners were three outs away from leaving Seattle. The Yankees just couldn’t get those three outs.

The Yankees, meanwhile, blew it. As would be the case in the desert in 2001 and in Boston and New York in 2004, the Yankees were on the precipice of playoff victory and couldn’t seal the deal. They headed west triumphant with a two games to none lead in the best-of-five series. They went down against Randy Johnson in Game 3. The Big Unit, a playoff bugaboo both pitching against and for the Yankees through 2006, struck out 10. In Game 4, the team jumped out to a 5-0 lead and was outscored 11-3 over the last six innings. Scott Kamieniecki, Sterling Hitchcock, Bob Wickman, John Wetteland and Steve Howe just couldn’t get it done.

And then there was Game 5. It was a tense affair for the Yankees. George Steinbrenner had grown to hate the popular Buck Showalter, and Showalter’s tense managerial style clearly had an impact on the team. But the Yanks had a lead heading into the late innings. They went up 4-2 when a Don Mattingly double unfortunately bounced over the wall. Much as he could not when a Tony Clark double bounced over the wall in Fenway nine years later, Ruben Sierra was not allowed to score on Mattingly’s ball. It was the first bad bounce to change baseball history.

David Cone stayed in too long, and the Mariners tied it up in the 8th. Mariano Rivera came in to clean up the mess, and the Yankees finally recognized the weapon that would fully emerge in 1996. When the Big Unit came in to pitch in relief, the Yankees were in trouble. They eked out a run in the 11th, but Jack McDowell couldn’t hold it. Joey Cora singled, Ken Griffey singled, and Edgar Martinez roped a double down the line. It was all over.

Donnelly’s storytelling as the games unfold is a pleasure. More than once, I had to put the book down to gather myself when I knew the inning or the game wasn’t going to end for the Yankees. As the team gathered in tears in the visitors’ clubhouse in Seattle, I thought back to my frustrations as a young baseball fan. After the strike-shortened season of 1994, baseball needed a thrilling postseason, but Yankee fans wanted wins. We knew Mattingly would retire; we knew Showalter would be fired. But we didn’t know what glory awaited.

Baseball’s Greatest Series doesn’t dwell much on the game past 1995, and it doesn’t have to. It’s a great complement to Buster Olney’s The Last Night of the Yankee Dynasty in that it dissects a transformative moment in baseball — and Yankee history — and shows how it led to a different era for the game. It’s heartbreaking to read about the stunning Yankee losses, and Edgar’s double burns just as badly as Luis Gonzalez’s single. But it’s a more interesting read than a profile of the 1990s dynasty teams.

Donnelly’s story, in the end, is about baseball’s redemption after a pointless strike. It’s about the way George Steinbrenner loomed over the Yankees and how the team’s loss in Seattle turned them into a winner despite the Boss’ crankiest moments. It’s about how the Mariners needed that win and how, with a bounding ball into left field, Seattle erupted, New York cried and we had to wait, without knowing what 1996 would bring, until next year yet again.

is available for sale at Amazon and your local bookstore. If you use the link in this paragraph to buy the book, we earn a few pennies on the sale. It’s a brisk 287 pages, and you’ll find yourself yet again cursing the Mariners by the end of it.

As part of the spate of baseball books that hit shelves this year, Chris Donnelly’s Baseball’s Greatest Series: Yankees, Mariners, and the 1995 Matchup That Changed History arrived in my mailbox last week, and I launched into it last night. The book, which I’ll review when I’m through with it, takes place in a different era than the one we know today. Some of the names — Andy Pettitte, Derek Jeter, Jorge Posada, Mariano Rivera, Alex Rodriguez, Ken Griffey — still resonate in the game in 2010, but in 1995, the game had reached a nadir.

For months, there was no baseball. It is almost inconceivable now to imagine that the owners and players would be at such loggerheads as to allow a strike to happen, but as the owners pushed for a salary cap and the players resisted, baseball ended on August 12, 1994. I was 11 and devastated. That Yankee team was the best of my early fandom years, and when the World Series was canceled, the team and its fans were heartbroken.

As the days ticked on, the owners and players remained at a stalemate, and teams could not afford to sacrifice the season. Enter the replacement players. In an effort to field any sort of baseball team, the owners began the hunt for non-union players who would be willing to cross picket lines for a professional baseball paycheck or a dream fulfilled. As February neared, teams refused to unveil their assembled rosters of replacement players.

The first conflict to come up arose with the managers and coaches. These men were not players union members and were employees of their owners. Fiercely loyal to their players, as Buck Showalter explained, the on-field coaching staff members had to decide between their boss and their players. Most of them reluctantly went to Spring Training, hoping for a quick end to the strike. On the eve of Spring Training, Showalter did not have high hopes for his rag-tag bunch of players.

So who were these guys better suited to softball leagues than Spring Training fields, resembling the Bad News Bears more than the first-place Yankees? Well, for starters, one man who wasn’t there and opting against going stands out. As Jack Curry detailed, 20-year-old Derek Jeter, then the Yanks’ top prospect, refused to join the replacement players. For many minor leaguers not part of the union yet, the invitation to a Big League camp would prove alluring simply because many knew 1995 would be their best and only shot at breaking camp with a big league club.

“I wouldn’t go no matter what,” Jeter said to The Times. “Easy question, easy answer. If someone is out there striking for me, it would be like stabbing them in the back if I played. I wouldn’t do that.”

For those who went to camp, their only shots at fame came as replacement players, and the names are indeed forgettable. Joe Ausenio, a pitcher I once saw in the early 1990s in Oneonta, didn’t go, but his roommate Mark Carper showed up to camp. Showalter said those two would never have even been in consideration for the team a year before. Doug Cinnella, currently a Reds scout, was 30 and had bounced around the minors, playing for the Orioles, Expos and Mets before arriving in camp in 1995.

The other names sound even less familiar. John DiGirolamo dropped a pop up and couldn’t get a good swing off of Nelson Perpetuo in an intra-squad match up. Tim Byron was a teacher who had not pitched professionally since 1986. Scott Epps, a bad Yankee farmhand, summed up the replacement mentality. “I don’t think they see me as a prospect,” he said 15 years ago. “For that reason, I have to do what is best for me. Right now, this is an outstanding opportunity.”

When the games started, the results were ugly. Few fans showed up, and the quality of play was abysmal. Players — such as 250-pound Matt Stark, out of baseball since 1990, who crushed a metal folding chair when he sat down — made headlines for the wrong reasons, and as March wore on the players and owners had to find a solution. It took an injunction against the owners to get the players back on the field, but it was just in the nick of a time. A replacement season would have been even worse.

Today, the replacement players have largely faded from memory. A few — Kevin Millar, Ron Mahay, Shane Spencer — eventually reached the majors, but most faded from baseball’s history books. Those replacement players were denied union membership and were tarred with the feathers of the strike. It is a moment baseball would be wise to avoid repeating again.