Coming into the offseason it was clear the Yankees need at least one starting pitcher, if not two given the big workloads the staff endured in 2017. In a perfect world one of those two starters would’ve been Shohei Ohtani. That won’t happen though. Re-signing CC Sabathia seems likely, at least I think so, but even then there’s still room for another starter. There’s no such thing as too much pitching depth.

One of the top free agent starters this offseason — I’d say he’s the top second tier starter behind Yu Darvish and Jake Arrieta — is longtime Rays right-hander Alex Cobb. He turned 30 in October, and even though the Rays haven’t been a .500 team since 2013 (true story), Cobb has been through the AL East grinder and knows what it’s like pitching against great teams in tough hitter friendly environments. The Yankees have not been seriously connected to him yet, only speculatively, though I suspect it’ll happen at some point. Let’s break Cobb down as a potential target.

This is the logical place to start, because Cobb’s injury history is sneaky long. So long in fact that his 179.1 innings this season represent a new career high. Here’s a recap of his injury history with the amount of time missed:

Definitely some fluky stuff in there that is not a long-term concern. Two oblique strains four years apart? It happens. Turf toe? Whatever. Getting hit in the head by a line drive and being carted off the field on a stretcher, as scary as that is, is a total fluke. The baddest of bad luck injuries.

On the other hand, Thoracic Outlet Syndrome is very serious and can end careers if not caught early enough. Tommy John surgery is obviously very bad too. The combination of the two is worse than the sum of the parts. Chris Carpenter is the only notable example of a pitcher who had both and went on to have a long career. Shaun Marcum and Noah Lowry had both and were done. Jaime Garcia had both and hasn’t been the same since. Same with Matt Harvey, though he’s only a year removed from his Thoracic Outlet Syndrome surgery.

The good news is Cobb had the procedures five years apart, and he returned in 2017 to be an effective pitcher in close to 180 innings. So perhaps he’s the next Carpenter rather than the next Marcum. In fact, he’s already ahead of the game just by making it back from both procedures and throwing a full season. Still though, that’s a pretty scary injury history, even ignoring the fluky stuff.

When Cobb returned with his new elbow late last year, he was so bad that it’s almost hard to believe. He allowed 22 runs and 39 baserunners in five starts and 22 innings last season, after returning in August. Yuck. That said, it was his first five starts back from Tommy John surgery, so it’s fair to cut the guy some slack. Chalk it up to the rust and the usual post-elbow reconstruction wonkiness.

Anyway, because of the offensive explosion from 2014 to 2017, we have to throw Cobb a bit of a bone here. His home run rate nearly doubled? Okay, part of that is what’s going on around baseball in general. The decline in strikeout rate and ground ball rate is not a juiced ball problem, however. In fact, we should’ve expected Cobb’s strikeout rate to increase this year because there are so many more strikeouts in baseball now.

If you’ve been watching the Yankees long enough, chances are you’ve seen Cobb shut them down with that nasty split-finger fastball of his at some point. That pitch is the reason he made it to the big leagues. That pitch is also perhaps the biggest red flag surrounding Cobb at this point. Since Tommy John surgery, it has behaved almost nothing it did before he had his elbow rebuilt.

Eno Sarris touched on this back in April, but that was very early in the season, and now we have a full season’s worth of data to examine. Cobb’s splitter lost quite a bit of effectiveness from his pre-Tommy John surgery days. Here are the splitter numbers, ignoring that short and messy 2016 stint.

Ideally you want an 8-10 mph gap between your fastball and offspeed pitch (if not more), but even at his best from 2013-14, Cobb’s velocity gap was roughly five-and-a-quarter miles an hour. Because he doesn’t have that huge velocity gap, he relies on movement more than most, and for whatever reason, the split is not moving like it did before Tommy John surgery, especially vertically. It’s not diving out of the zone.

It should also be noted Cobb’s release point with his splitter — and only his splitter, weirdly — has risen since he came back from Tommy John surgery. He’s releasing the splitter from a higher spot than before his elbow ligament gave out. Look: 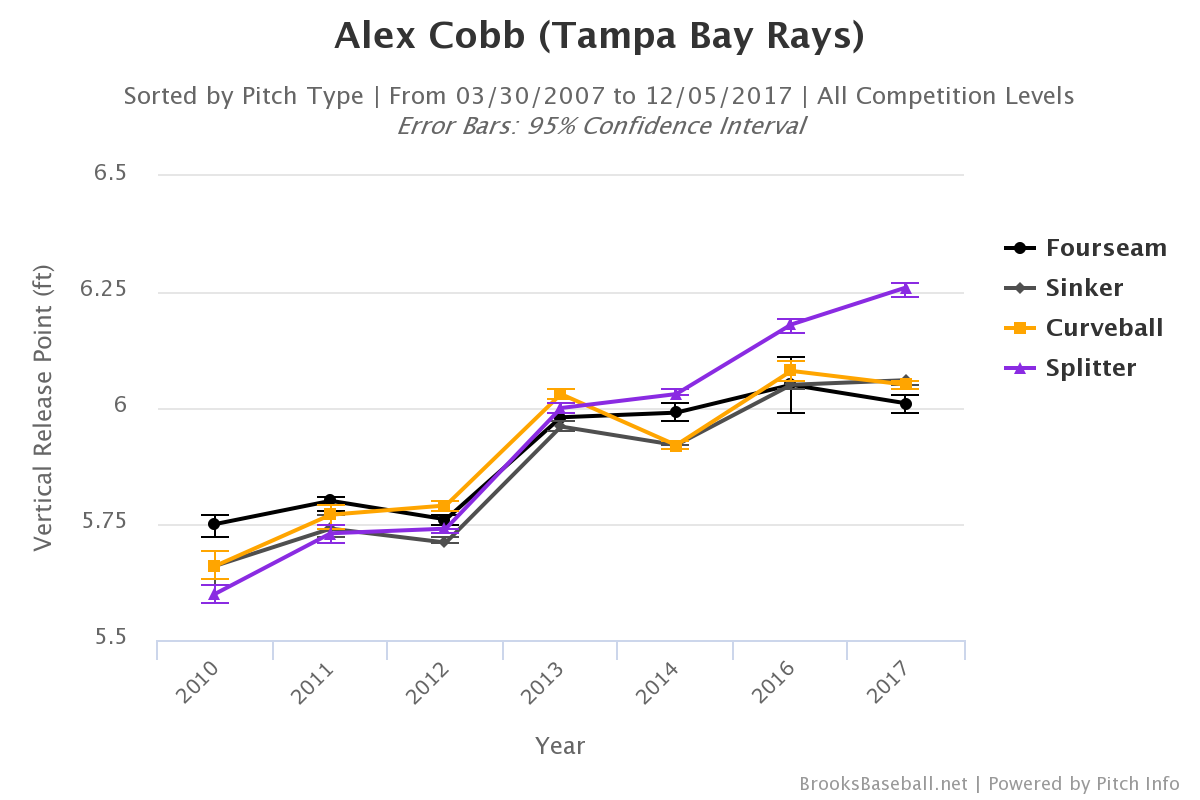 That is weird. Is the change in release point causing the lack of movement? Or has Cobb raised his release point in an effort to generate more movement? Chicken or the egg, man. Chicken or the egg. Whatever it is, Cobb is not getting the same movement on his splitter now as he did before Tommy John surgery, and as a result, the pitch is generating fewer swings and misses and ground balls. And he’s not throwing it nearly as often.

The split-finger is what made Cobb so good before Tommy John surgery and that pitch is the key to him being a quality pitcher going forward. His sinker is fine and his curveball is fine, but they’re not good enough that he can scale back that much on his splitter and succeed forever. Like I said, what if Tanaka stopped throwing his splitter so much? He’d be a much different pitcher. Anyway, here’s some video of Cobb this year:

Seven strikeouts in the video. Four on sinkers and three on curveballs. Not one splitter. That would’ve been unthinkable for Cobb before Tommy John surgery. Bottom line: Cobb was quite good this season, but his splitter is not the same as it was before his elbow gave out for whatever reason, and unless that changes, there’s no reason to think he’ll return to his previous level of performance. He’s now a solid starter, not someone who is a borderline ace like he was from 2013-14. And hey, that’s fine. Solid starters are good to have.

Cobb is one of the top free agent starters on the market and that means he will be paid quite well. Quality starters never have trouble finding work. Here are two contract estimates:

I think both estimates are low. I could totally see Cobb pulling down $16M annually on a four or even five-year deal. That’s Ian Kennedy money. No, Kennedy did not have Tommy John surgery in his recent past, but he also wasn’t as good as Cobb, and he was a year older than Cobb is now when he hit free agency. Cobb at four years and $48M sounds pretty great actually, splitter issues be damned.

Also, keep in mind the Rays made Cobb the qualifying offer. Under the new Collective Bargaining Agreement the Yankees would have to surrender their second and fifth round picks in the 2018 draft, and $1M in bonus money during the 2018-19 international signing period, to sign a qualified free agent. I’d rather give all that up than my first round pick like they did in old days, but that’s just me.

Yes because he’s a quality starter — even with his post-Tommy John surgery splitter — and the Yankees could use another quality starter. It sure doesn’t hurt that Cobb is AL East battle tested and turned only 30 in October, meaning you should get another year or two of peak performance, in theory. The Yankees need another starter and Cobb is among the best available, so yes, he’s a fit on the field.

Is he fit under the luxury tax plan? My calculations say the Yankees have about $35M to play with under the luxury tax threshold, though I underestimated the team’s contribution to player benefits, so it’s actually closer to $32M or so. Still though, that’s a nice chunk of change, so the Yankees can afford Cobb. Can they afford Cobb and Sabathia? Eh, probably not. Remember, they have to leave some money open for midseason call-ups and the trade deadline additions.

Personally, I think Cobb carries an awful lot of risk. He has both Thoracic Outlet Syndrome and Tommy John surgery in his history and his best pitch is not the same anymore, and I think it’s much more likely the pitch gets worse going forward with age, not better. Maybe Cobb will bounce back next year and pitch like the 2013-14 version of himself, or even just maintain his 2017 performance. I’m not willing to bet $12M or $14M or $16M or whatever it ends up being on him. It doesn’t matter what I think though. It matters what the Yankees think, and whether they’re willing to take the risk.