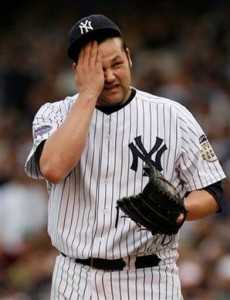 Even though the Yanks walked away with a win yesterday, neophyte righthander Joba Chamberlain labored through yet another start, struggling with his command and failing to put hitters away with two strikes. After the game Joba said he thought he did pretty well and there wasn’t much he could do, but the most damning quote was: “At the end of the day, the sun comes up and I still have a job.” That’s beyond delusional, because at this point in his career Joba isn’t guaranteed anything. All he needs to do is look across the clubhouse at Phil Hughes for an example of that. Joe Girardi commented that they’ve been working with Joba on improving his tempo and plan to continue doing so, but we’ve seen absolutely zero improvement in five starts now.

Yet because Joba is the darling that he is, fans blamed grumpy old veteran Jorge Posada for his struggles, pumping out excuses about his inability to call a good game and work with pitchers. Meanwhile, the pitching staff went from allowing 5.27 runs per game to 4.15 runs per game after Posada returned from the DL on May 29th. So whatever problem Posada has working with pitchers, it appears to be confined to Joba. Either that, or the rest of the staff is just better at overcoming those problems. The most likely explanation: Joba is the problem.

In hindsight, calling Joba up and moving him to the bullpen in 2007 was the worst possible thing the organization could have done. Oh sure, the Yankees wouldn’t have made the playoffs that year without Joba’s stellar relief work, but as is often the case with the Yanks, they mortgaged part of the future for the present. Joba was thrust into the spotlight far too soon; he had New York eating out of the palm of his hand thanks to his triple digit fastball and explosive fist pumps before he was ready for it. First there were the “We want Jah-Ba! clap clap clapclapclap” chants, then there were the Joba Rules shirts, then there were Phiten and Modell’s commercials. But it was all too soon.

Don’t get me wrong, Joba was more than ready physically. His stuff was unbelievable and the results were astonishing. But mentally, Joba was still just an immature 21-yr old kid unprepared for the spotlight. He came into camp in 2007 and promptly missed the first month of the season after catching a spike during PFP and pulling a hammy. After just seven dominant starts with High-A Tampa, he was bumped up to Double-A Trenton. Six starts later, Joba was in Triple-A readying himself to come out the bullpen. He didn’t have enough time to even catch his breath all season, let alone learn how to get by on days when he didn’t have his best stuff or deal with failure. He was rushed and everyone is experiencing the consequences now.

However, it’s not to late to correct that. It’s time to ship Joba to Triple-A. Call up Sergio Mitre, move Phil Hughes or Al Aceves into the rotation, do whatever has to be done to soak up those innings, but right now it’s best for Joba to pitch in an environment that’s geared more toward development than production. Make him carry around his own bags and twiddle his thumbs on the bus. Make him watch 35-year-old Jason Johnson pitch with a torn labrum just because it might be the last chance he gets to chase his dream. Have him sit and watch good friend Ian Kennedy rehab from an aneurysm that could have potentially ended his career. Give him a dose of reality, and let him realize just how fortunate he is.

Again, don’t get me wrong. I love Joba as much as the next guy, and I look forward to watching him anchor the Yankees’ rotation for the next decade, but at this point a demotion is what’s best for him. Have him start every five days and work on his command, his tempo, his everything. Let him face experienced hitters in Triple-A and learn how to attack them. Simply put, it’s time for Joba to make up for the development time he missed out on by being rushed to the big leagues back in 2007. For once, the Yankees should put long terms plans ahead of short term gains.

Note: This goes beyond Joba as well. Young players are being rushed to the big leagues more than ever these days, even though almost all of them need more innings/at-bats in the minors to hone their craft. It’s not just about production and physical gifts, the mental part of the game also needs to be developed. Remember that the next time you want Jesus Montero moved to the outfield or some young kid promoted after he hits a few homers or strikes a bunch of guys out.