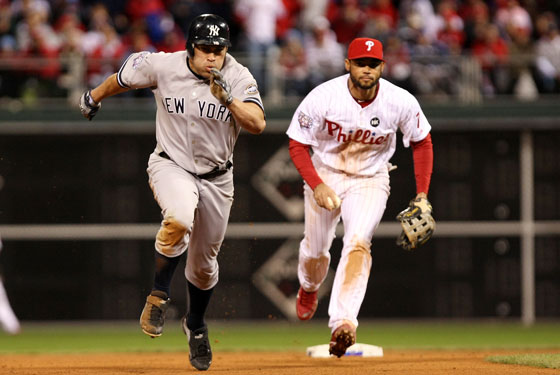 Because of the way FOX produces baseball games, when Johnny Damon slid safely into second, popped up and then started heading for third, my heart dropped. “What are you doing?” I thought. How could Damon, already in scoring position for Mark Teixeira, dream of taking third when Pedro Feliz was covering second and had the ball?

It was then that I realized Pedro Feliz, the Phillies’ third baseman, had the ball. If he had the ball, well, then no one was covering third. And why was no one covering third? Because Mark Teixeira was up from the left side, and all year teams have put a drastic shift on for lefty Teixeira.

So when Feliz fielded the ball in front of the base, Damon raced him to third. Says Jayson Stark:

Damon admitted afterward he had never done this before. And, in fact, it wasn’t immediately clear the last time anyone did this. But Damon said he’d been talking about it and thinking about it all year, since it became clear The Shift was going to be a regular feature of Teixeira’s left-handed at-bats.

Damon had to be safe. He had to know he would be safe because with Phil Coke, and not Mariano Rivera, warming up for a tie game, the Yankees couldn’t afford to take chances. After the game, Damon chuckled disbelievingly at the play. “If it was Chone Figgins,” he said, “that might have been tough. I just went off of instinct. And fortunately, it worked out.”

Once on third base, Damon was firmly inside the heads of Brad Lidge and Carlos Ruiz, the Phillies’ battery. Lidge hit Mark Teixeira with the next pitch and refused to throw Alex Rodriguez a slider for fear that a wild pitch would give the Yanks the lead. A-Rod and Jorge Posada made that slider a moot point, and before the dust had settled, the Yanks were sitting pretty on a 7-4 lead.

While thinking about the play as the post-game show unfolded last night, I remembered 2003 and so did Derek Jeter. On Opening Day, the Yankees were in Toronto, and Jeter had a lead off first base. Jason Giambi hit a bouncer to Roy Halladay, and Doc threw to Carlos Delgado at first. Jeter knew that, with the Giambi shift on, third base was unoccupied, and he didn’t stop. Delgado threw across the diamond as Ken Huckaby, Toronto’s catcher, raced up the line. Huckaby caught the ball and crashed into Jeter. Derek’s shoulder was dislocated, and he would not play again until May 13.

Last night, there was no Ken Huckaby, no Carlos Ruiz, no Brad Lidge awaiting Johnny Damon at third base. The Yanks’ left fielder caught everyone off guard, and as the Yankee bench, millions of fans, and Carlos Ruiz watched the play unfold, Damon beat Feliz in a dash to third. It was a race for ages.

“You know how people always tell you that they’ve been in baseball for 40 years, 50 years, and things happen every game that they never saw?” Yankees bench coach Tony Pena said last night. “Well, I’ve never seen that before. I never saw that before in my life.”