Over the past three years the Yankees have employed Joba Rules to one degree or another. In 2007 it prevented him from pitching on back-to-back days. In 2008 it meant him starting the season in the bullpen. In 2009, most frustratingly, it led to three-inning starts in August. The Yankees had the best of intentions in mind, of course. Joba had just 15 minor league starts, about 88 total innings, before making his Major League debut, and the team wanted to make sure they weren’t increasing his workload too quickly. There’s nothing wrong with trying to keep your pitchers healthy. 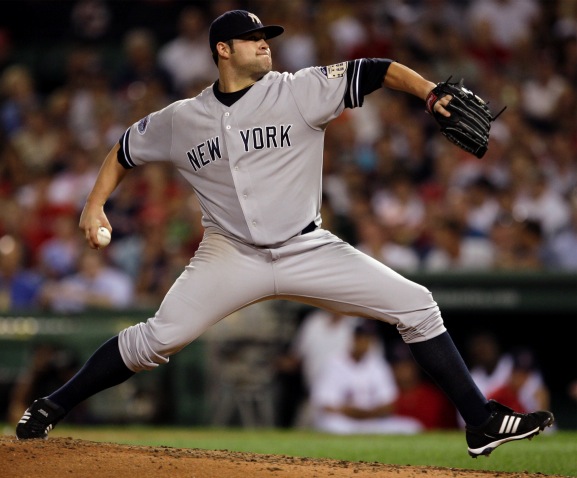 The recent obsession with innings limits originated with research conducted by Sport Illustrated’s Tom Verducci and then-Athletics pitching coach Rick Peterson. They found that pitchers aged 25 and younger who pitched more than 30 innings over their previous career high were at risk of performance drop-off or injury in the next year. Intuitively, the theory makes sense. Going from the couch to running five miles is a terrible idea. Runners will succeed more often if they start small and build up to those five miles. With data to back up the idea, teams could act by limiting their young starters’ innings.

Many fans might be frustrated, then, to see Joba Chamberlain appear on the 2010 Verducci list. Between the regular season and the playoffs Joba threw 163.2 innings. Verducci identifies that as an increase of 47.2 innings over his previous career high. So what gives? The Yankees went through so much trouble to keep Joba’s innings at a reasonable level. How can Joba still be listed as an at-risk pitcher?

An increase of 47.2 innings means that Verducci identified Joba’s career high as 116 innings. That comes from 2007, Joba’s first professional season, when he threw 88.1 minor league innings. 24 regular season ML innings, and 3.2 postseason innings. Looking at his Baseball Cube page, we can see that Joba threw 118.2 innings at Nebraska in 2005, followed by 89.1 innings in 2006. We can tack on 37.2 innings to his 2006 total, since he pitched in the Hawaiian league, bringing his total to 127. This morning, Mike mentioned that he threw another 45.1 innings in summer ball, the M.I.N.K. League (Missouri, Iowa, Nebraska, Kansas) in 2005, bringing his total that year to 164 innings.

The progression moves oddly for Joba. How do the Yankees determine his previous career high? Is it his absolute high, which occurred four years prior? Was it his first professional season, most of which he spent in the minors? What about the gap between his innings in 2006? The difference between his bullpen and his rotation innings in 2007 and 2008? The most important question, to me at least, is of the difference between college, minor league, fall league, summer league, and major league innings. The competition is different, but does that change how the pitcher works?

Not even Verducci himself can answer those questions. He admits that the Year After Effect is more a rule of thumb, a general guideline. Each pitcher has throws different pitches with varying amounts of force. Furthermore, each pitcher’s body reacts differently to the stress of pitching. Every year Verducci identifies at-risk pitchers who cruise through the season. Among that group from the 2009 list: Tim Lincecum, Clayton Kershaw, Jair Jurrjens, and Jon Lester. He also identifies five pitchers as confirming his rule, but Mike Pelfrey, Cole Hamels, Chad Billingsley, John Danks, and Dana Eveland spent a combined zero days on the disabled list in 2009. They didn’t perform to their 2008 levels, but that can also be attributed to them being young, relatively inexperienced pitchers.

None of us has any idea what’s in store for Joba health-wise in 2010. From what I can tell he’s missed time only twice in his career with injuries. First came at Nebraska in 2006, when his draft stock dropped because of triceps tendinitis. He again suffered from tendinitis in 2008, this time in his shoulder. Yes, he saw a sharp increase in his 2009 totals over his previous professional highs, but he has thrown that many innings before, and at a relatively high level. How will that play into his 2010 season? I’m comfortable saying that I don’t know.

Sticking the new guy in left field
Chien-Ming Wang heads to D.C. (for real this time)