Yesterday we heard some sad news: Frank Thomas has retired after 19 big league seasons. Though sad, the news comes as no surprise. Thomas didn’t play in 2009 and saw a massive drop-off in power during 2008. Though he wasn’t quite as bad as his 72 plate appearances with the Blue Jays suggested, he posted numbers just slightly above league average in his return to Oakland that year. That left him with the lowest wOBA of his career, putting his injury decimated 2001 season aside. 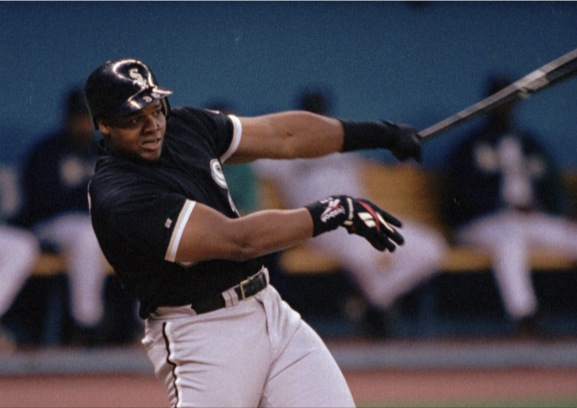 Growing up, The Big Hurt was my favorite non-Yankee. I didn’t understand concepts like OBP back then, so I didn’t realize that Thomas led the league in that category in three of his first five years in the league. But I did understand batting average and home runs, both of which Thomas supplied in abundance. I’m pretty sure, in fact, that I learned about slugging percentage because of him. I just remember seeing the letters SLG on the back of his baseball card, with numbers unlike I’d ever seen, or cared to notice, listed below.

Thomas was one of the most highly regarded prospects in the 1989 draft. The Yankees, who finished 85-76 in 1988, fifth place in the AL East, didn’t stand a real chance to draft him. Even if he had fallen to them at No. 15, the Dodgers would have been the beneficiaries, since they received the Yankees’ first round pick as compensation for free agent Steve Sax. I didn’t know that at the time, of course, but that didn’t stop me from imagining what the Yankees, pathetic as they were in my baseball loving youth, would have looked like with The Big Hurt batting cleanup.

This is just a fun exercise, not any kind of serious analysis. I’ll use Thomas’s actual stats and imagine them in the Yankees’ lineup, tweaking aspects here and there to fit the narrative. The team did, after all, have this guy named Don Mattingly already playing first, so the storyline figures to be at least a little different.

Don Mattingly, who missed seven games in early July because of back problems, finally realizes that he can no longer play through the injury. The Yankees place him on the disabled list before the game, calling up Frank Thomas from AA Albany. But, because the game was in Texas Thomas cannot make it in time. Kevin Maas gets the start at first against Nolan Ryan, who is trying for his 300th win. The Rangers give him a 2-1 lead through three, but Maas, leading off the fourth, ties the game with a home run. Ryan has to try again next start.

Sick of watching Steve Balboni strike out a third of the time, manager Stump Merrill implements a rotation between Thomas and Maas for the first base and DH spots. Though their pitching still keeps them down, the Yankees finish 73-89, one game ahead of the last-place Brewers. Thomas contributes heavily to the rise from last place, hitting .330/.454/.529 in 240 plate appearances.

The Yankees face a tough situation in the off-season, having three players for the first base and DH spots. Mattingly is entering the first year of a five-year, $19.3 million contract. Combined with his status as Yankee legend, he is untradeable. With Thomas a rising star, Maas is the most expendable. The Yankees trade him to the Cardinals for Bob Tewksbury, who heads the rotation along with Scott Sanderson.

In the June draft, the Braves pick first and select Brien Taylor, a phenom prospect who has some of the best pure stuff scouts have ever seen. The Yankees pick fifth and select local product Manny Ramirez.

With Tewks at the helm and Thomas taking most of the reps at first, so to rest Mattingly’s back, the Yankees improve greatly in 1991, going 80-82. Thomas finishes third in the MVP voting, hitting .318/.453/.553, leading the league in OBP and OPS, though few baseball fans even know the terms at the time. What they do know is that he hit 32 home runs and 31 doubles.

Seeing the team is on the verge of something, Bobby Bonilla chooses the Yankees over the Mets. The switch hitter turns in a nice season, hitting .249/.348/.432 to go with Thomas’s .323/.439/.536. But, most importantly, Tewksbury goes 16-5 with a 2.16 ERA, winning the AL Cy Young. He and Melido Perez head a much improved rotation, and with an improved bullpen the Yankees appear set. They finish 90-72, though that nets them only second place in the AL East to Toronto’s 94 wins.

In that June’s draft the Yankees pick 12th and take Ron Villone, a lefty from UMass. After the draft, everyone raves about the Giants, who with the sixth pick in the draft select Derek Jeter.

George Steinbrenner, back at the helm, realizes that his team is poised for a division title. While Stick Michael handles the smaller moves, such as trading Roberto Kelly for Paul O’Neill, Steinbrenner cooks the big plot. While both players are reluctant to play in New York, Big Stein makes Barry Bonds and Greg Maddux offers they can’t refuse, paying Bonds more than any hitter and Maddux more than any pitcher in the game.

Over the course of two seasons the Yankees go from an anemic offense to a powerhouse. The batting order:

The Yankees finish 98-64, winning the AL East. They beat up on the White Sox before beating the Phillies and bringing a World Championship back to the Bronx for the first time in 15 years.