Chances are the Yankees won’t make any changes to the outfield this off-season. Their payroll is already over $150 million, counting estimated arbitration raises, and they still have a few positions to fill. Why, then, would they mess with one of their stronger aspects? The Yankees featured the only outfield in which each member boasted a 4+ WAR. While that brings no guarantees for next year, it certainly makes the situation appear a bit stronger than, say, starting pitching. Why mess with what’s worked?

Let’s turn to a hypothetical, though. What if the Rangers somehow outbid the Yankees on Cliff Lee? The Yankees would then turn to the trade market for a starting pitcher. While prospects such as Jesus Montero will certainly top teams’ wish lists, we’ve often seen teams require major league ready talent in a trade. This is especially true for established teams. To use the mystery pitcher as a for-instance, if the Yankees inquired on Chris Carpenter the Cardinals might require an outfielder they can plug right into the lineup. That moves us to the title question:

If you had to trade either Nick Swisher or Curtis Granderson in order to acquire a starting pitcher, whom would you choose?

I like this comparison, because not only are Swisher and Granderson the same age, but they also came into the league in the same year. That means that their comparison charts on FanGraphs line up perfectly. Here’s the wOBA chart: 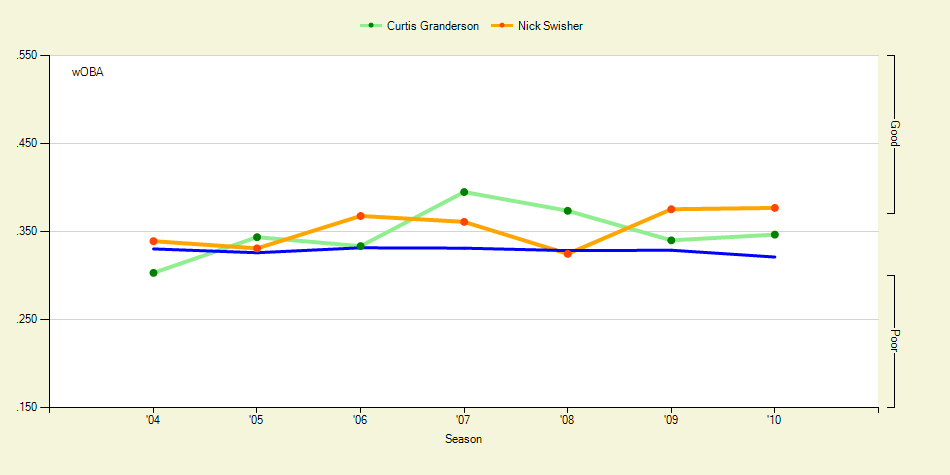 And the WAR chart: 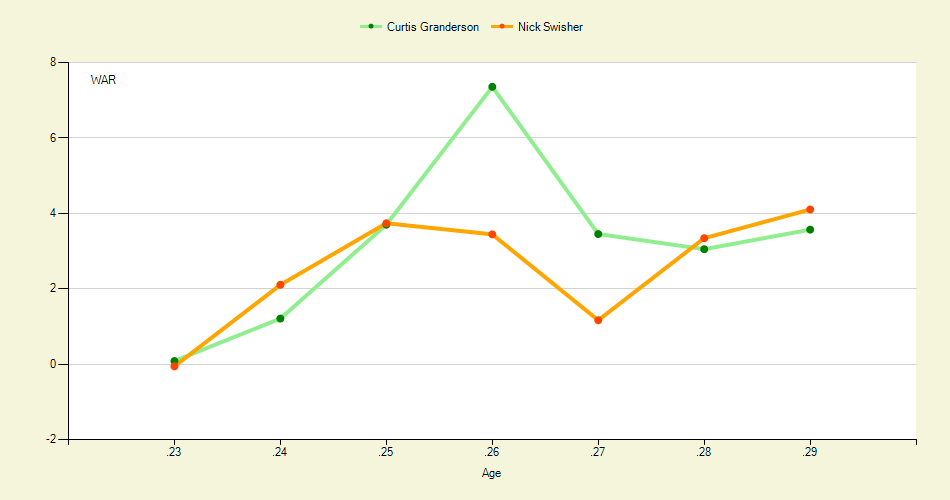 These charts are another reason to like the comparison. While it appears that Swisher has come into his own as the better hitter, Granderson’s defense has allowed him to stay close to Swisher in terms of WAR. In fact, Granderson’s career WAR is a bit better than Swisher’s, mainly due to Granderson’s 2007 being far better than any year in Swisher’s career. But if you look at their WAR by nth best season, you can see that they’re pretty damn close: 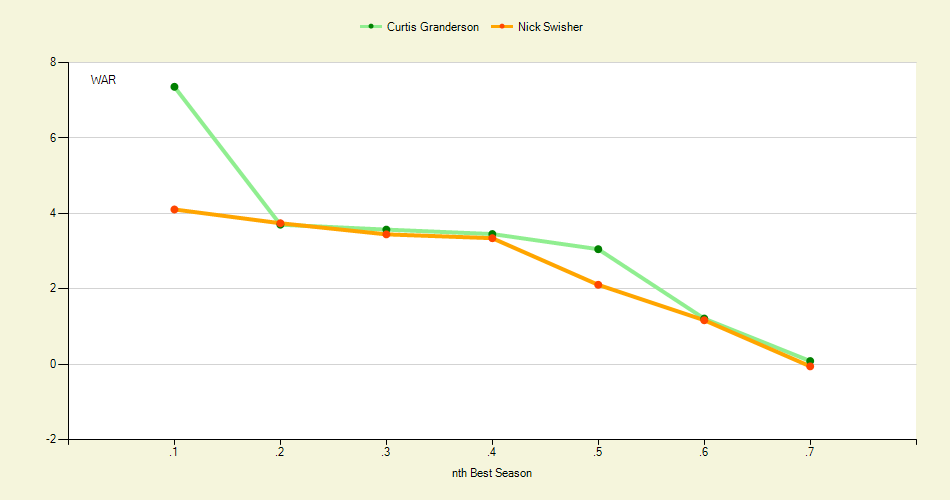 The case for dealing Swisher

As a hitter, Swisher is the easy sell. He was known as a solid hitter with a good eye and decent power when he was in Oakland. Then he ruined his value by producing poorly in Chicago. With the Yankees he has done nothing but improve. His .375 wOBA in 2009 was the best mark of his career, and he topped that in 2010 with a .377 wOBA. Even more impressively, he accomplished the improvement with a more aggressive approach. If he can get his walk rate back over 10 percent in 2011 while maintaining the contact skill he displayed in 2010, he might be even more valuable.

This makes him valuable to other teams. The perception that he’s a better hitter than Granderson might mean he weighs more heavily in a trade. His defense has been the source of much criticism, but it’s mostly overblown. He makes a few boneheaded plays here and there, but for the most part he’s solid while roaming right field in Yankee Stadium. He is, however, prone to trouble on the road. Still, it’s easier to hide middling defense and focus on quality offense than the reverse.

The case against dealing Swisher

Trading Swisher leaves the Yankees with an outfield of Granderson and Brett Gardner. That’s some excellent defense right there, but it lacks the traditional power bat. Granderson helps compensate in that department, since he hits for more power than most center fielders — he ranked fifth in the majors, and two of the guys ahead of him did not play the majority of their innings in center. Still, it’s tough to imagine how they’ll replace Swisher in right, without any viable in-house options.

That might mean splurging on Jayson Werth. True, the Yanks could go for Carl Crawford and have an outfield defense for the ages. And perhaps the short porch would enhance Crawford’s power. But they’d have to shuffle things, perhaps putting Granderson in right because he has the best arm among them (and that’s not saying a ton). Werth and Crawford will probably require something around 75 to 80 percent of Cliff Lee’s average annual value, so if the Yankees were to acquire a pitcher in the mold of Chris Carpenter — high priced and near free agency — they might not be able to afford one of those two.

The case for dealing Granderson

While Swisher has shown improvement in his numbers during the last two years, Granderson has moved in the opposite direction. There’s a chance that the level at which he hit in 2010 is the level at which he’ll hit for the next few years. If that’s the case, the Yankees might want to trade him if they find an interested suitor. The problem, of course, is selling his skills to that mystery team. But if they can do that, they’ll still be set up to recreate the outfield.

With Granderson gone the Yankees can slide Gardner into center field. That opens up an opportunity to find a player for either of the corners, since Swisher could likely handle left field (but, because of middling defensive skills, is probably better in the more confined grounds of right field). Crawford is the obvious solution here, though the same caveat applies as above. If the Yankees trade Granderson and his $8.25 million salary, but take back $17 million, and then try to add $18 million for Crawford — well, they might not fit that under budget. Then again, we’ve seen the Yankees break budget in the past. Perhaps if it means acquiring a front end starter and rebuilding the outfield they’ll take a chance.

The case against dealing Granderson

We saw a much improved Granderson in the final month and a half of the season. After his mid-August tutorial with Kevin Long he hit .261/.356/.564. That’s a small sample and doesn’t tell us anything by itself. But combined with our knowledge that he changed things a bit, we can be a bit more confident that his 2011 will be better than his 2010. And if his 2011 resembles his 2008, the Yankees will have one of the most valuable center fielders in the league.

Remember, too, that the Yankees have a ton of fly ball guys on the staff. A.J. Burnett and CC Sabathia can induce grounders, but they’re not near the top of the league. Phil Hughes is an extreme fly ball pitcher. Andy Pettitte is a fly ball pitcher at this point in his career. The Yankees can use some high quality outfield defense. Granderson fits that bill. Why trade him, when his offense could easily rebound and his defense remains well above average? Those skills can be invaluable to the Yankees.

Just so I’m not leaving the decision to everyone else while leaving myself out of it, I’ll go with my pick. I’d trade Swisher. I think he’s an easier sell at this point, and I think the Yankees can find an adequate replacement. Granderson is the riskier guy to keep, for sure. If he continues hitting along the lines of his 2009 and 2010 season numbers he’s not going to be as valuable as Swisher, defense or not. But I like what I see. Give me the center field defense and the power, with potential for more.