River Ave. Blues » A-Rod & Posada back Nova as Yanks drop Twins
Game Four: Under the lights for the first time
Ivan Nova's approach against the Twins

Is it possible that we’re taking the Yankees’ dominance of the Twins for granted? Like I said earlier, they’re 57-18 against Minnesota (regular season and playoffs) in the Ron Gardenhire era, and only twice (!!!) in that span have the Twins won a game in the Bronx not started by Johan Santana. That’s insane. So when New York jumped out to an early four-run lead on Monday, I think we all just sat back and relaxed. The Twins tried to mount a comeback, and they came close to completing it at times, but Ivan Nova did some fine work for six innings and the bullpen took care of the rest.

The Yankees (and pretty much every other team for that matter) have put on a fireworks display early in the season, clubbing homers left and right like it’s nobody’s business. Alex Rodriguez got the party started in the very first inning, taking Scott Baker deep on a 1-0 fastball inside. It wasn’t a big fly in the literal sense of the term, it was a line drive right into the left field stands, one of those old school Gary Sheffield lasers. Mark Teixeira was hit by a pitch in his right foot one batter earlier (he’s fine), so Alex’s blast gave the Yanks a two-run lead seven total batters into the game. In case you’re wondering, this homer was the biggest WPA swing of the game at +.167.

That wouldn’t be all though. One inning later, Jorge Posada hit his third homer in the last two days, a more traditional fly ball into the right-center field stands. Baker pumped fastball after fastball – in succession of the at-bat, they clocked in at 90, 89, 91, 89, 89, 91 – and eventually Jorge locked in. The homer put two more runs on the board (Nick Swisher walked one batter earlier), giving the Yankees a comfortable four-zip lead. Posada and A-Rod have done a lot of great things during their time in pinstripes, and they came through once again on Monday. Jorge’s blast swung the WPA +.125 in the Yankees’ favor.

Those are the two best results a pitcher can coax out of any given at-bat, and tonight Ivan Nova supplied plenty of them. The young right-hander completed six innings of work for just the second time in eight career starts, generating all but four of his 18 outs on the ground or on strike three. That includes two double plays, one by Denard Span to end the third, and another by Delmon Young to kill a potential rally in the sixth.

That last double play was probably the biggest out(s) Nova got all game (WPA says it was at +.123), since the Twinkies had just crept to within one the inning before and were again threatening when Justin Morneau singled to open up the sixth. Nova’s pitch count was a very manageable 75 at the time, but he was again struggling the second and third time through the order. He started Young off with a fastball in on the hands, the same pitched he used to retire him in the second (routine fly ball to right) and generate a ground ball in the fourth (single through the right side), but Delmon fouled this one off for strike one. The next pitch was a changeup down, the pitch that got the double play. After failing to put away Jim Thome two innings prior (resulting in a two-run double),  Nova got him to swing through a fastball for the strike to end the inning and his night of work.

We’ll have more on Nova’s night in the morning, but the rookie gave the Yankees the kind of start they’ll take from him every time out. Six innings and three runs, a quality start by the definition of the stat (but the same 4.50 ERA he had last season), the kind of game New York will win with their offense and bullpen more often than not. He still has to work on doing a better job once the lineup turns over, but that’s something that will come in experience. You can’t work on that in the bullpen.

The Bullpen From Hell

The late-game trio of Joba Chamberlain, Rafael Soriano, and Mariano Rivera were perfect in three innings of work on Opening Day, and they again did the job tonight. Joba set down the three men he faced in order while Rivera pitched around a two-out Jason Kubel single for his third save, but Soriano was the real star out of the pen. Why? Because he’s the guy that was handed the ball against the heart of the order.

Denard Span led off the eighth, he of the .538 OBP (yes, SSS) coming into the game, but Soriano sat him down on a perfect strike three on the outside corner. Japanese import Tsuyoshi Nishioka dunked a single in front of Curtis Granderson reached on an infield single after a comebacker deflected off Soriano’s glove and away from Derek Jeter, bringing the go-ahead run to the plate in the form of Joe Mauer and then Justin Morneau. Rafi fed the 2009 AL MVP a steady diet of cutters and sliders, getting him to lift a fly ball to Brett Gardner in left on a full count for the second out. Soriano went after the 2006 AL MVP the same way, cutters and sliders, getting him to pop up harmlessly to third in a 1-2 count. Yes, Rivera ended the night with the highest WPA of the trio (+.183), but Soriano was the most important reliever in my book just because he retired Mauer and Morneau with the tying run on base in a one run game. Hooray for deep bullpens.

Although they combined to go 0-for-7, I thought Gardner and Derek Jeter looked much better tonight than they did against the Tigers. Gardner drew a walk in the second, had a surefire extra base hit taken away when Young made a sliding catch in the fourth, and then laced a line drive right at Morneau in the seventh. No hits, but he hit the ball hard twice and saw 21 pitches in four trips to the plate. That’s more like it. Jeter, meanwhile, actually looked mobile in the field, and hit a few balls hard that either landed foul or in the glove of a defender. Some of them were actually in the air too. The results sucked, the process looked much better.

Teixeira remains en fuego, shaking off that first inning hit-by-pitch to go 1-for-2 with a walk, narrowly missing his fourth homer of the year when the ball hooked foul. A-Rod grounded into a pair of double plays in his last two at-bats, but I’m not complaining after the first inning homer. The five through nine hitters combined to reach base seven times, highlighted by a pair of Robbie Cano singles.

How nice is it to have a catcher that actually frames pitches? We haven’t seen much of that in recent years. I don’t want to say that Russell Martin stole some strikes with the way he framed some offerings, but he definitely … helped make sure the ump got the call right. Yeah, that works. He singled once in three trips to the plate and stole second on a delayed steal in the fourth. He’s on a 0.1 fWAR per game pace in the early goings.

David Robertson has warmed up in all four games this year, but he’s only pitched in one. Joe Girardi needs to chill with that, the guy’s going to be burnt out by June with like, 15 IP to his credit. Robertson and Joba should be interchangeable in my opinion, but Girardi said after the game that Chamberlain is his set seventh inning guy. I don’t see the need to announce it to the world, but whatever.

The two RBI tied A-Rod with his former teammate Rafael Palmeiro for 15th place on the all-time career list at 1,835 steaks. That’s the good news. The bad news is that for the third straight game, we have a new record-low attendance at Yankee Stadium. Just 40,331 fans showed up tonight.

MLB.com brings you the box score and video highlights, but FanGraphs has everything else. 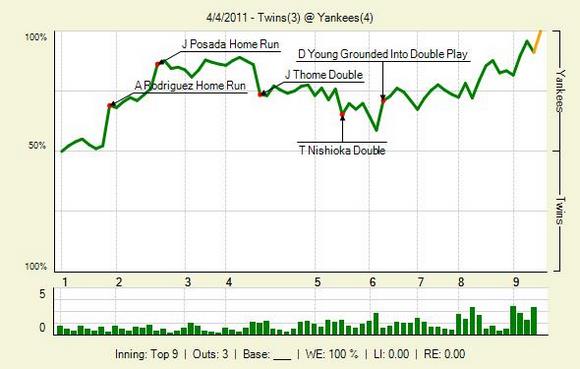 Same two teams mañana, when CC Sabathia takes on fellow lefty Brian Duensing. That one will start at 7:05pm ET.

Game Four: Under the lights for the first time
Ivan Nova's approach against the Twins