River Ave. Blues » Once again, Yanks are tops at working the count
Ticketmaster now allows fans to pick their own seats
Not too many homers, too many double plays

It’s been kind of a weird season for the Yankees offensively, in that they’ve often looked sluggish and still have the best statistical performance around. They’re first in the game with 5.31 runs per game, and they lead baseball in OPS (.800) and wOBA (.352). Their .252 team batting average is being held back by a .266 BABIP, something that should correct itself as the season progresses, but they still lead the league in OBP (.339) thanks to a gaudy 10.7% walk rate, the best in all the land. They’re a power and patience club, so it shouldn’t be a surprise that they swing at the fewest pitches out of the zone (23.7%) and have the largest ISO (.209) in the game. Once that BABIP gets back to normal, it’ll be glorious.

As a team, the Yankees have seen 3.92 pitchers per plate appearance, the third most in the AL. Curtis Granderson has seen the second most pitches per plate appearances in the game (4.51, behind only Carlos Santana at 4.53), and Brett Gardner isn’t too far behind him at 4.30. Nick Swisher (4.22) and Mark Teixeira (4.09) are also over four pitches per trip to the plate, then you’ve got Russell Martin (3.93), Alex Rodriguez (3.90), and Jorge Posada (3.90) right behind them. Considering that the league average is 3.83 pitches per plate appearance, that’s pretty good. Robinson Cano is the only real eye sore on the team, he’s seeing just 3.20 P/PA. That ranks 193rd out of the 194 batters that qualify for the batting title (only Orlando Cabrera is worse at 3.07). I believe the word is: Yikes.

The concept of working the count isn’t just about drawing walks or getting the starting pitcher out of the game early. The point of the game is to score runs, and the easiest way to score runs is by getting hits. Batters that take pitches are waiting for a good pitch to hit before pouncing, essentially trying to get themselves into hitter’s count (2-0, 3-1). The more pitches they see, the better the chance of getting their pitch, i.e. a mistake. Walks are just a byproduct, or they should be, anyway. Of the Yankees’ 1,210 team plate appearances this year, 503 of them have ended when the batter was ahead in the count, or 41.6%. The other 13 AL teams average 35.8%. They’ve ended a plate appearance in a pitcher’s count 305 times (25.2%, 31.0% lg avg) and the other 402 times when the count was even (33.2%, exactly lg avg). It’s not a coincidence that the Yankees lead the league in offense and are the best at getting into hitter’s counts. 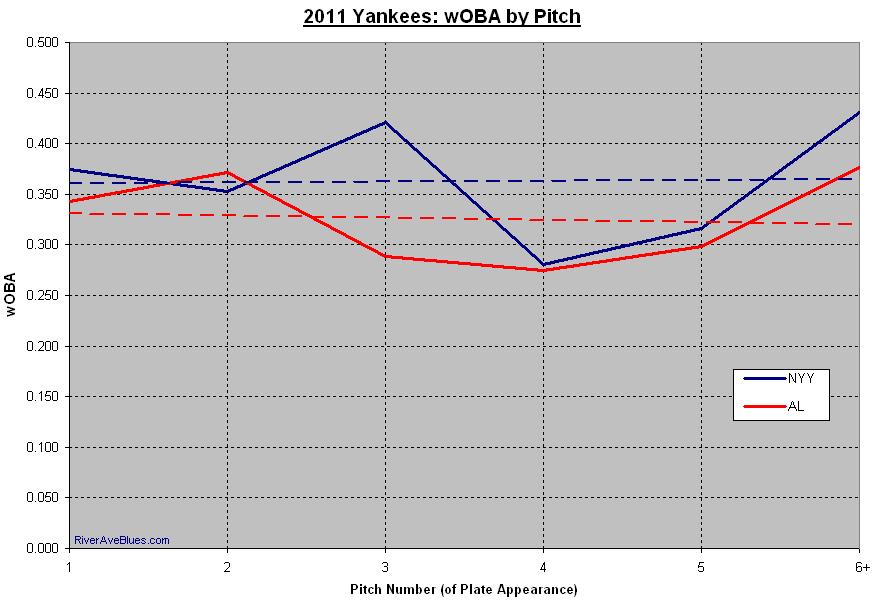 That graph (click for larger) shows the team’s wOBA by pitch of the plate appearance vs. the league average. The big difference comes on the third pitch of the at-bat, which has a lot to do with the Yankees working themselves into a 2-0 count 4.13% of the time, far greater than the league average (2.87%). They’ve also been surprisingly productive in 0-2 counts, hitting .243 with a .122 ISO compared to .157 and .063 for the AL as a whole, respectively. That will probably even out as we get deeper into the season though. The dips on the third and fourth pitches have to do with players simply taking pitches in 3-0 and 3-1 counts more than anything else. The old saying is that the longer the at-bat, the more it swings into the hitter’s favor, and judging by the performance of the both the Yankees and the league on the 6th+ pitch of the encounter, that certainly holds true.

The last two weeks haven’t always been pretty offensively, but that has more to do with some drastic slumps (Alex Rodriguez, Nick Swisher, Jorge Posada in particular) than the team being flawed as a whole. They’re not going to hit .242/.336/.453 with men in scoring position all season (that, by the way, is 18% better than league average) just because a .242 BABIP in those spots is pretty unsustainable. The Yankees just have to stick with their game plan of taking pitches and getting into the good hitter’s counts, and the rest will take care of itself.

Ticketmaster now allows fans to pick their own seats
Not too many homers, too many double plays