One of the best and worst things about baseball is that almost nothing goes according to plan. Not in a single game, not in a typical three-game series, and certainly not over the course of a full season. Players perform in a way other than expected (for better or for worse), guys get hurt, players get traded, all sorts of stuff happens. No roster entity is more volatile than the bullpen, which is basically just a collection of guys working from one small sample to the next.

When the season started, Mariano Rivera was being setup by Eighth Inning Guy™ Rafael Soriano and Joba Chamberlain in the seventh. David Robertson was the world’s most overqualified sixth inning reliever, Boone Logan the shaky lefty specialist, Luis Ayala the extra guy, and Bartolo Colon the long man. Phil Hughes’ suckiness and shoulder issues forced Colon into the rotation and brought a cache of spare part relievers to the Bronx: Lance Pendleton, Amaury Sanit, Buddy Carlyle … all made appearances at one time or another. Ayala’s injury brought Hector Noesi into the fold.

Because of Soriano’s early season ineffectiveness and eventual injury, Joba and Robertson moved up a rung on the bullpen totem pole. Both performed well, very well in fact, then all of a sudden Joba was down for a count with a torn elbow ligament that required season-ending Tommy John surgery. In the span of three weeks, the Yankees lost their two primary setup guys. Given the importance the team (or at least Joe Girardi) seems to place on these stupid bullpen inning assignments, you’d think the Yankees were headed for certain doom, but nope.

Robertson, even when Soriano and Joba were healthy, had developed into the best reliever in the American League (leads the league in fWAR), a legitimate All-Star with the second highest strikeout rate in baseball at 13.59 K/9 (min. 40 IP, second only to Craig Kimbrel’s 14.11 K/9) and one of the lowest batting averages against (.179). His walk rate continues to improve as well, and is gradually approaching normalcy… 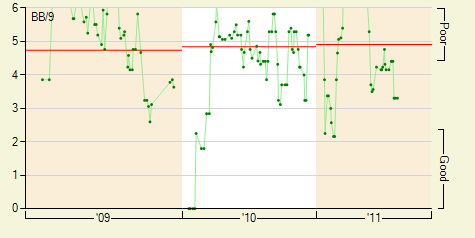 Since June 5th, the date of Joba’s last appearance, Robertson has walked a total of seven batters unintentionally in 24.1 IP. That’s a 2.59 uIBB/9. He’s walked a batter in only five of those 25 appearances as well, so he’s certainly gotten that part of his game under control. Robertson’s been amazing, but he’s only part of the story because of the rest of the bullpen fell into place behind him.

The Carlyles and Sanits and Pendletons of the world were replaced with Cory Wade, who’s been so effective for the Yankees that both myself and Hannah wrote about him recently. Boone Logan has turned things around since a mid-June series in Cincinnati, improvement that has more to do with him dropping his arm slot just a bit (check out the release points) to get some more bite on his slider than it does some pep talk with Alex Rodriguez. Ayala is the “only in an emergency, last arm in the bullpen” kinda guy, and Noesi is the de facto long reliever. He should be starting in the minors, but that’s another post for another time. Oh, and Soriano’s back from his injury and pitching well, and has assumed seventh inning duties now. He’s the Seventh Inning Guy™ now.

Other than the closer in the ninth inning, I hate the whole concept of assigning relievers to specific innings because the manager manages the game to arbitrary endpoints (why are outs 22-24 any different than 19-21?). I hope that at some point Soriano pitches well enough to take back the eighth inning, freeing up Girardi to be a little more liberal with his use of Robertson. Having him start an inning fresh with no outs and no one on base is pretty much a waste given his propensity to pitch out of jams. I think this is another post for another time as well, so let’s leave it at that.

Anyway, the moral of the story is that once again, the bullpen is a dynamic entity over the course of a 162-game season, changing as needed to accommodate injury, poor performance, etc. Only three relievers (Robertson, Mo, and Logan) have spent the entire season on the active roster, everyone else (a total of 12 others relievers) has been either hurt, demoted, released, or all of the above. The Yankees started the year with a set formula, and now it’s entirely different and probably even more effective than originally expected.

2011 Draft: Closing Thoughts
Would Jorge have made a good backup catcher?