It’s no secret that the Yankees’ collective starting pitching has not lived up to expectations thus far on the young season. While there’s nowhere to go but up at this point, I was curious to see how the team’s woeful April performance — at 5.73, the Yankee starters have put up the second-worst collective ERA in MLB; the only team with a worse mark is Minnesota. Boston’s starters, after a week of beating up on the AL Central, brought their mark down to 5.71 — stacked up against previous Yankee teams, so I went back and collected the last 10 years worth of monthly Yankee starting pitching ERAs. 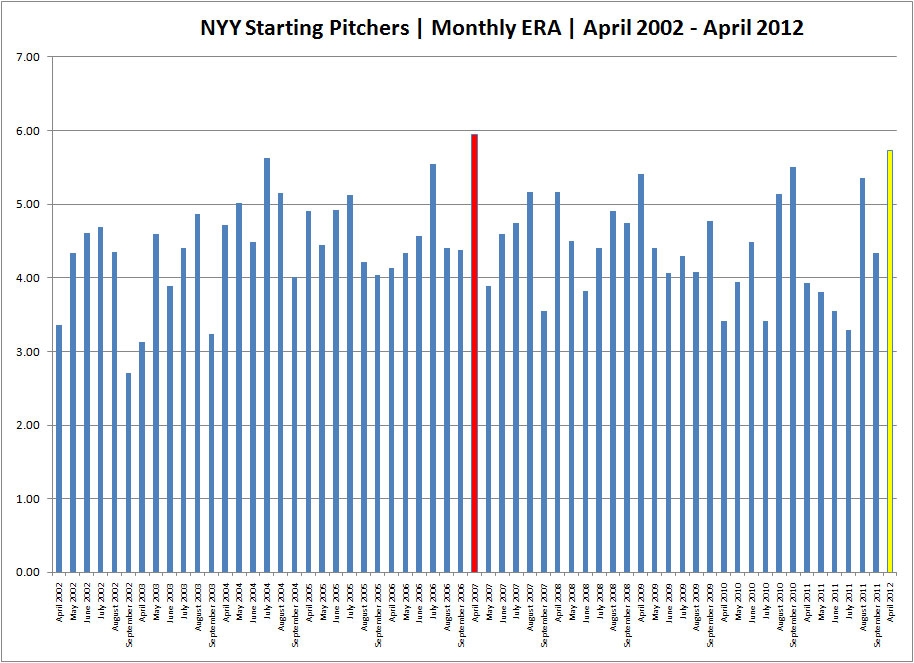 If the Yankee starters were to finish April out at their current 5.73 ERA, it would represent the second-worst mark the team has put up in a month in the last 10 seasons. The worst was April 2007’s 5.94, much of which was due to Kei Igawa being allowed to throw 20.2 innings of 7.84 ERA ball, although Chien-Ming Wang’s 5.84 in 12.1 innings and Chase Wright’s 7.88 in 8 innings didn’t help things, either.

Now obviously ERA only tells a very small and flawed portion of the story. I was also curious to see how the team got to this point and whether they were doing anything substantially different, so I grabbed their PITCHf/x stats for April 2012, April 2011, and the MLB average. 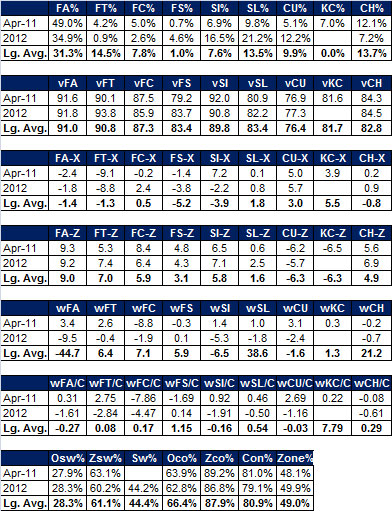 The first thing that jumps out is the team’s deployment of the four-seamer appears to be way down from a year ago in favor of more sinkers and way more sliders. And this is problematic in that the rotation’s sinkers are collectively getting crushed to the tune of -5.3 runs above average and -1.91 per 100 pitches thrown. The latter figure is 92%(!) worse than league average. This appears to be due to location issues — the team is leaving its sinkers closer to the middle of the plate horizontally than the league, and its sinkers are rising nearly an inch-and-a-half higher. As always, we need to approach the classification algorithm with some wariness, but if this data is accurate it helps partially explain why the execution’s been so poor.

Somewhat surprisingly, one of the primary culprits for the poor sinker showing is CC Sabathia, who TYA’s Mike Eder noticed last week was leaving the pitch up during his first few innings against the Twins until correcting whatever flaw in his mechanics led to this happening. Given Sabathia’s improvement in the latter half of the Twins game and strong showing against the Rangers last Monday, I wouldn’t expect the sinker to be an issue going forward. Sweaty Freddy’s sinker has been the worst in baseball in the early going, though I have less confidence that he’ll be able to rectify his situation.

The other bizarre aspect relating to the Yankee starters’ performance this month is that their peripherals have been, for the most part, outstanding.

They’ve been striking a ton of men out — second-highest K/9 in the AL, behind Chicago by 0.01 — and walking almost no one. The team’s biggest bugaboo has been the home-run ball. Surprisingly the starters haven’t even given up the most total home runs in the AL, but on a rate basis they’ve been abysmal, with a second-worst-in-MLB 1.73 HR/9, and a 17.3% HR/FB% ranking third-worst. They also have the highest BABIP in the league by a not-small margin, and all three of these figures are way, way above league average.

Despite all of this starting ineptitude, at 10-8 the team is only two games behind where it was last year after 18 games, and two games better than the 2007 team and its decade-worst monthly ERA. Even better news for Yankee fans is that it would be almost impossible for the team’s starters to perform any worse than they have, and hopefully they start turning it around sooner rather than later.