Up two games to none in a best-of-seven series with the best pitcher on the planet scheduled to start Game Three is one hell of an enviable position. Unfortunately the Yankees are on the other side of that coin, down two-zip in the ALCS and slated to face Justin Verlander in his home ballpark tonight. That ain’t pretty.

Verlander, 29, put together another brilliant regular season — 2.64 ERA and 2.94 FIP in 238.1 innings — and seems to have gotten the postseason monkey off his back with a dominant ALDS showing. He came into 2012 with a 5.57 ERA in eight starts and 42 playoff innings but held the Athletics to one run in 16 total innings last week. Verlander was the worst possible matchup for the free swinging and strikeout heavy A’s, a description that unfortunately fits the Yankees’ offense at the moment as well.

The Yankees saw Verlander in all three series against Detroit in the regular season, beating him twice before that career-high strikeout total-tying performance in August. That game broken a stretch of six consecutive starts (playoffs included) against New York in which the right-hander allowed at least one first inning run.

The Yankees have actually hit Verlander harder than any other AL team in his career, a span of 13 starts and 345 batters faced. The problem is that his career started in 2005 and most of that information is irrelevant. The Yankees managed to hang five runs on him twice this year, but that still isn’t encouraging. Even if the offense was clicking on all cylinders at the moment, beating Verlander would still be a tall order. Now that they’re mired in a team-wide mega-slump, it seems like generating offense off him with take a miracle. 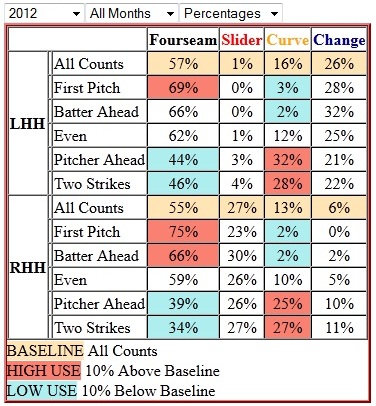 There is no mystery here. Verlander gets ahead with his mid-to-high-90s fastball (he famously adds velocity in the later innings) and puts hitters away with his knee-buckling upper-70/low-80s curveball. He’ll also throw a mid-80s slider to righties that breaks more down-and-away (like Joba Chamberlain’s) than side-to-side. Verlander’s mid-80s changeup has morphed in a knockout pitch against lefties because he throws it with the same arm speed as his fastball. Felix Hernandez might have something to say about it, but there’s a very strong case to be made that the Detroit right-hander has the best pure stuff in the business. Two top of the line pitches in the fastball and curveball plus two other above-average offerings in the slider and changeup. Just filthy.

Well, I hope you weren’t looking for a platoon split because Verlander dominates everyone. Maybe right-handed batters have a slightly better chance against him because he strikes out a touch fewer, but … nah. The guy is a machine and any team that faces him should run their very best lineup out there and forget all about platoon splits. The problem is that the Yankees don’t have a very best lineup right now, at least nothing outside of Mark Teixeira and Raul Ibanez in the middle of the order. The only thing I have to add here is that Verlander will let you steal a base, so anyone who reaches base tonight should be thinking about a stolen base as soon as possible.