On the off-chance that you missed it, the Yankees gave Aroldis Chapman the largest contract ever handed out to a reliever back in December, re-solidifying the back of the bullpen that they had gutted (for the best of reasons) a handful of months prior. There’s something poetic about the fact that the team dealt its closer for a player that would become its best prospect, only to have those two on the same roster less than a year later. It makes a great trade look even better, regardless of the fact that re-signing Chapman shouldn’t influence one’s thoughts on the deal. But I digress.

An argument can be made that Chapman is the best reliever in baseball, which may well be stating the obvious. He finished 4th in the Majors in fWAR and 9th in RA9-WAR despite not throwing a pitch until May 9 (due to his suspension for domestic violence), ranking among the top-five in K%, K-BB%, ERA-, and FIP-. And this is nothing new for Chapman, either, as the southpaw leads all relievers in fWAR and RA9-WAR over the last five years. It’s telling that his 13.97 K/9 and 40.5 K% are his lowest marks since he took over for Francisco Cordero as the Reds closer following the 2011 season.

How does he do it?

Chapman has not had anything short of a brilliant season since becoming a closer, with the only real variations being degrees of excellence. In the last five seasons he hasn’t struck out fewer than 40.5% of batters, nor has he allowed an ERA higher than 2.54 – and his averages in that stretch are 44.2% and 1.84, respectively. And this past season, when he posted that measly 40.5% strikeout rate, he offset it by posting a career-low walk rate of 8.1% (the first above-average mark of his career). I’ll take that trade-off.

It isn’t just consistency with his statistics, either. Take a look at his velocity: 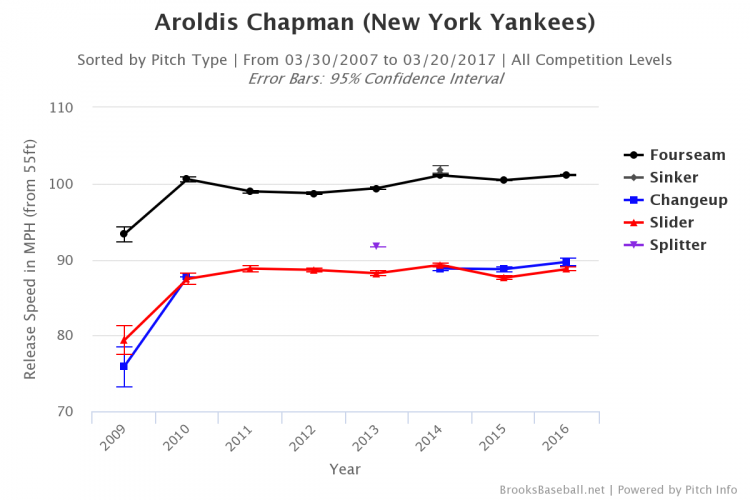 All of his offerings have remained steady since 2010 – his first full-season in the Majors, and they actually ticked up a bit last season. In fact, he showcased the second-best fastball velocity of his career in 2016 per Brooks Baseball, clocking in at 101.08 MPH. His slider and change-up velocity have been similarly metronomic, which is a great sign.

The movement on his pitches is consistent, as well, even if there are a few sections that stand out a bit more: 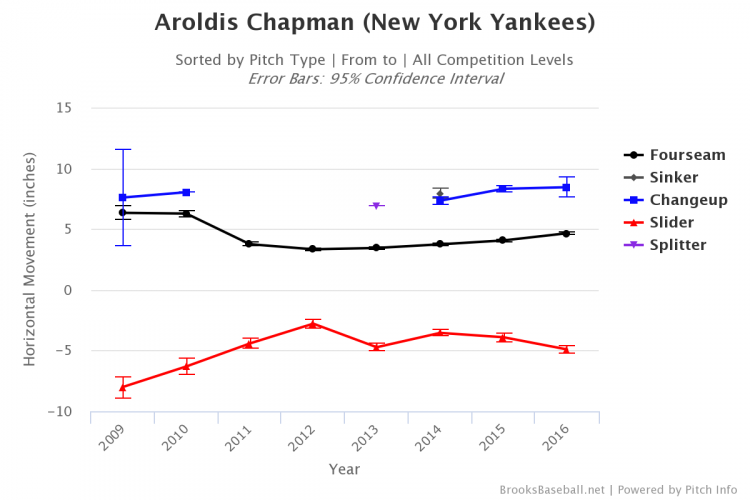 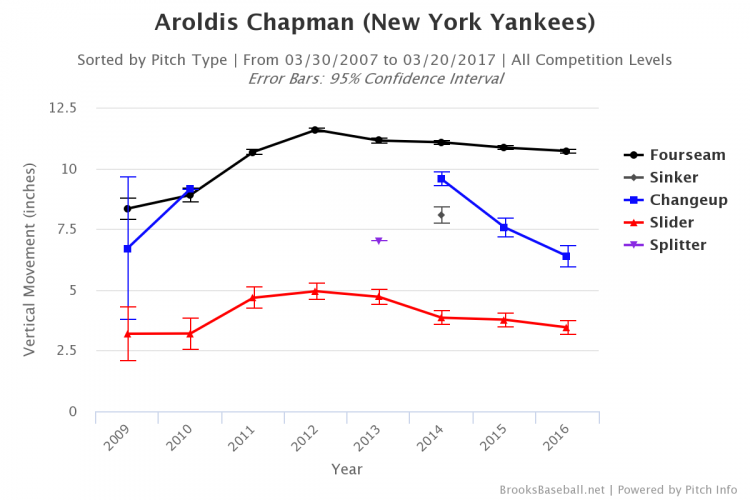 It is worth noting that he barely utilizes his change-up (less than 3% of his pitches were change-ups last year, per Brooks Baseball), so it makes some sense that it would be something of an outlier. He has tinkered with different grips, too. 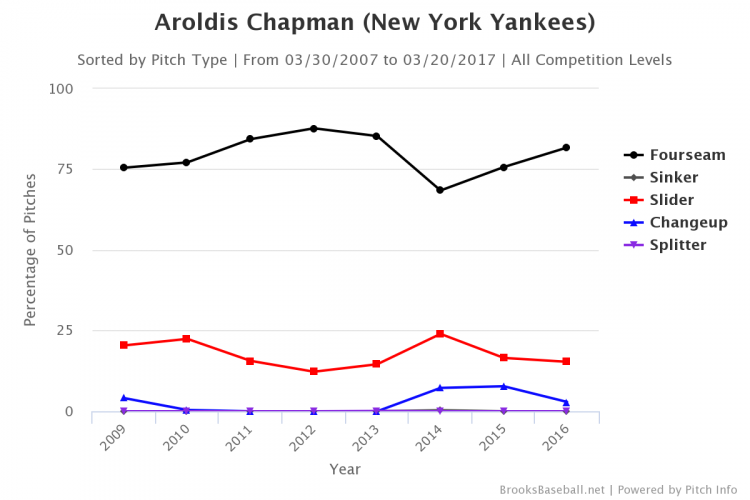 In 2014, nearly a quarter of Chapman’s pitches were sliders – and that appears to be the outlier in his time as a closer. Around 15% of his offerings were sliders last year, which placed him 72nd among the 130 relievers that threw at least 50 IP. And, to be fair, his slider usage ranked him 50th among 138 in 2014, so our perception of him as a slider-happy pitcher may be a bit of cognitive dissonance due to the wipe-out nature of the pitch.

That premium velocity has almost undoubtedly taken its toll, but focusing on fastballs could play a roll in Chapman remaining healthy. Whether that is a conscious decision or a matter of him sticking with what works is another question entirely.

What About The Playoffs?

Chapman came perilously close to adding his name to the list of curses that had plagued the Cubs franchise for over a century when he blew the save in Game 7 of the World Series, allowing a game-tying two-run home run in the bottom of the eighth inning. It was his third blown save of a postseason in which he posted an uncharacteristically high 3.45 ERA and 1.09 WHIP (and, no, the fact that those numbers would be good for most relievers isn’t lost on me).

The Cubs won the World Series, so all was forgiven. Does that mean that we should forget about Chapman’s intermittent struggles? Yes. Yes it does.

Between the regular season and playoffs, Chapman nearly matched his career-high in IP, doing so despite his shortened season. He pitched 13 times in 27 days in the playoffs, including three times in four days leading into Game 7. Despite this, his velocity was as steady as ever: 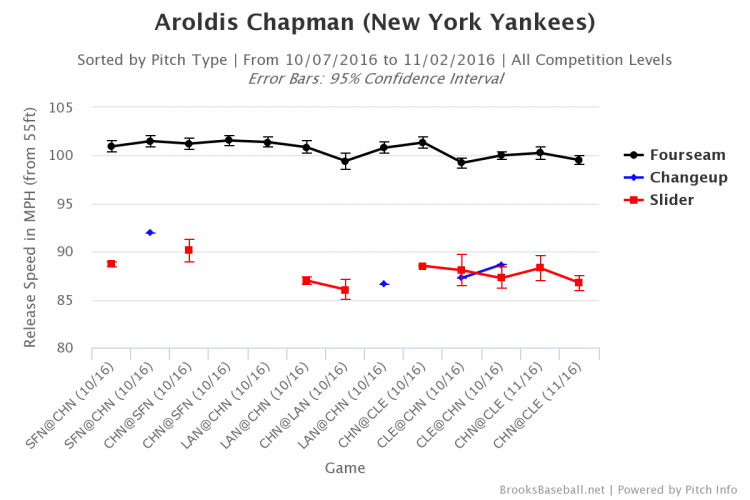 The Cubs utilized Chapman exactly how they should have, and he may have been worn down somewhat in the process. That may give the Yankees a reason to be gentle with him early in the season, but it does not give much of a reason to be concerned about his abilities going forward.

The projection systems largely forecast the status quo for Chapman, albeit with what would be his highest ERA since 2013 (2.33 for Steamer, 2.34 for ZiPS, and 2.45 for PECOTA). That represents the safe route, factoring in a full season in a hitter’s park in a division full of potent offenses. Nevertheless, I expect Chapman to continue to be an elite closer in 2017.