River Ave. Blues » Scouting Game One of the ALCS: Dallas Keuchel
The Astros' bullpen may have some depth issues heading into the ALCS
Umpire Review: 2017 American League Championship Series

In just a few hours the Yankees will open their ALCS matchup with the Astros at Minute Maid Park in Houston. The Yankees completed a pretty incredible comeback from down 0-2 in the ALDS to beat the Indians, the AL’s best team during the regular season. Now they’ll have to beat the AL’s second best team in the ALCS.

Verlander’s relief appearance means Keuchel starts Game One tonight, and Keuchel is something of a Yankees nemesis despite not playing in the same division. He beat the Yankees in the 2015 Wild Card Game, as you know, though he’s also had his way with them in the regular season. For his career, Keuchel has a 1.41 ERA (1.59 FIP) in six regular season starts against the Yankees, plus he threw six shutout innings on short rest in the 2015 Wild Card Game.

Like I said, Keuchel has dominated the Yankees historically, but so did Corey Kluber and look how that turned out in the ALDS. I suspect we’re going to hear a lot about that 2015 Wild Card Game during the broadcast tonight, but keep in mind this is a different Yankees team. The only Yankees who were in the 2015 Wild Card Game starting lineup and are still with the team are Brett Gardner, Didi Gregorius, Greg Bird, and Chase Headley. And Headley’s not in the lineup tonight.

Overall, players on New York’s roster have hit .184/.215/.282 in 108 total plate appearances against Keuchel in his career, which dates back to the time before he emerged as an ace. I’m not sure why that history would be relevant now. Keuchel’s a different pitcher. Here are the numbers against Keuchel the last three years:

Anyway, the head-to-head history still isn’t very good, though most players in that table only have three career plate appearances against Keuchel, so it’s not a ton of history. Neither Headley nor Ellsbury, who have combined for 31 of those 82 plate appearances against Keuchel, is in the lineup tonight. Noticeably absent from that table is Todd Frazier. He’s never faced Keuchel in his career.

In Game Two of the ALDS the Red Sox scored one run in 5.2 innings against Keuchel, forcing him to throw 96 pitches. The Red Sox don’t have a great offense though. The Yankees hit for considerably more power and are better at working the count and prolonging at-bats. That doesn’t automatically mean they’ll have more success against Keuchel, of course.

Keuchel is a throwback. The Yankees just saw an Indians pitching staff loaded with power arms and wicked breaking balls. Keuchel is a finesse southpaw with a sinker that sits right around 90 mph. That’s the pitch that gave him the league’s best ground ball rate in 2017. Keuchel, similar to CC Sabathia, will bust righties inside with a cutter and get them to chase away with a changeup. He also has a good slider. Keuchel doesn’t bring a lot of velocity to the table, but he knows how to pitch. He’ll pitch inside and keep everything down. 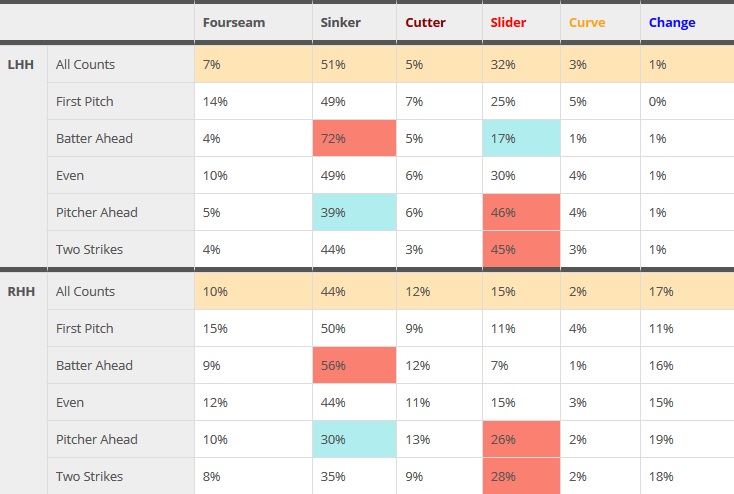 Lefties get the slider, righties get the cutter and changeup. Pretty standard. Keuchel is quite similar to the current version of Sabathia, though his sinker is top notch and his cutter has more cutting action. Their style is similar though.

Here is every pitch Keuchel threw against the Athletics on April 30th of this season, when he allowed one run in 7.2 innings. The dead center field camera angle provides a great look at the movement on his pitches.

Keuchel is going to frustrate the hell out of hitters and also fans, who will see less than premium velocity and pitches that look hittable result in soft contact. The subtle movement keeps Keuchel away from the sweet spot though. That’s how he succeeds. If he throws something that starts belt high, it’ll finish down around the knees. If he throws something that starts at the knees, take it, because it’ll probably drop out of the zone.

Despite the lack of overpowering stuff, Keuchel has absolutely crushed lefties the last three seasons. He’s quite good against righties too, but against lefties, he’s incredibly dominant. Here are the 2015-17 platoon splits:

Gardner, Gregorius, and Bird are the only lefties in tonight’s lineup, and they’re three guys who are going to play every game from here on out no matter what. Anything can happen in one individual game, but yeah, the righties are probably going to have to carry the offense against Keuchel tonight.

You know what? No. Shockingly. As I mentioned this morning, the Astros were by far the worst team in baseball at throwing out basestealers during the regular season. Keuchel, thanks in part to being left-handed, has an excellent pickoff move, however. Runners went 3-for-5 stealing bases against him in the regular season. That’s all. Over the last four seasons they’re 11-for-18. His pickoff move makes up for the terrible arms behind the plate.

Also, it’s worth noting Keuchel is the best fielding pitcher in baseball, which helps when you’re such an extreme ground ball pitcher. Bunting on him probably won’t work, at least not if you’re trying to bunt for a hit. Gardner unsuccessful tried to bunt for a hit on the first pitch of ALDS Game Five, though I don’t see that happening again against any pitcher, let along the best fielding pitcher in the game.

Because the Astros appear to have some middle relief issues, working the count and driving up the starter’s pitch count could have a huge impact on this series. I mean, that’s always a good strategy, but in the ALDS you knew Andrew Miller was going to be the first guy out of the bullpen, and that’s no fun. Chris Devenski faded down the stretch, so the Astros don’t have a Miller. The best plan of attack against Keuchel figures to be grinding out at-bats, waiting him out, then getting to the bullpen.

The Astros' bullpen may have some depth issues heading into the ALCS
Umpire Review: 2017 American League Championship Series