River Ave. Blues » Scouting Game Three of the ALCS: Charlie Morton
Thoughts prior to Game Three of the 2017 ALCS
Tommy Kahnle went from having an undefined role during the regular season to being a postseason weapon

Despite allowing four runs total in Games One and Two of the ALCS in Houston, the Yankees return home to New York for Game Three down 0-2 in the series. Annoying! Very annoying, really. The Yankees have been here before though. They came home down 0-2 to the Indians in the ALDS, and that was a best-of-five series. Not a best-of-seven. The current situation is not ideal. It is not insurmountable, however.

The good news: the Yankees don’t have to face Dallas Keuchel or Justin Verlander in Game Three tonight. Those two held the Yankees to one run total in 16 combined innings in Games One and Two. They are: good. Tonight the Yankees will face sinkerballer Charlie Morton, who threw 146.2 innings with a 3.62 ERA (3.46 FIP) during the regular season. His strikeout (26.4%) and ground ball (51.8%) rates were excellent. His walk rate (8.1%) was about average.

Morton’s lone ALDS start against the Red Sox did not go particularly well. He allowed two runs on seven hits and two walks in 4.1 innings, and, on top of that, six of the 12 balls in play against him left the bat at 100+ mph. The Red Sox hit some rockets for outs. Needless to say, it would be swell if Morton were that square-up-able again tonight. Let’s preview Houston’s Game Three starter.

This is Morton’s first season in the American League, so he has limited exposure to the Yankees. Players on the ALCS roster have hit a combined .326/.396/.600 with eight homers in 135 plate appearances against him in his career. A lot of that, including all eight homers and 87 of those 135 plate appearances, are tied up in Matt Holliday, Starlin Castro, and Todd Frazier. They faced Morton a ton when they all played in the NL Central.

Here is how Yankees on the ALCS roster have fared against Morton the last three seasons, via Baseball Reference.

Not nearly as much success as the overall career head-to-head numbers would lead to believe. Like I said, a lot of overall success comes from Holliday (Cardinals), Castro (Cubs), and Frazier (Reds) when they faced Morton (Pirates) on the regular as NL Central. A lot of the career head-to-head history is very old and not indicative of who these guys are as players today.

The Yankees did face Morton once this season, scoring four runs in 5.2 innings against him in May. His final line: 5.2 IP, 4 H, 4 R, 4 ER, 4 BB, 10 K. That is a bit misleading though, because Morton dominated the Yankees for four innings before falling apart in the fifth. A walk, two singles, and a Holliday homer put four runs on the board quick. Prior to that, Morton manhandled the Yankees.

Over the years Morton has gone through several transformations. He went from four-seam pitcher to straight sinkerballer with the Pirates years ago, when he literally copied Roy Halladay’s delivery, hoping it would work for him. He also scrapped his changeup in favor of a splitter. And over the last two years, Morton has added basically two full miles an hour to his fastball. From Brooks Baseball: 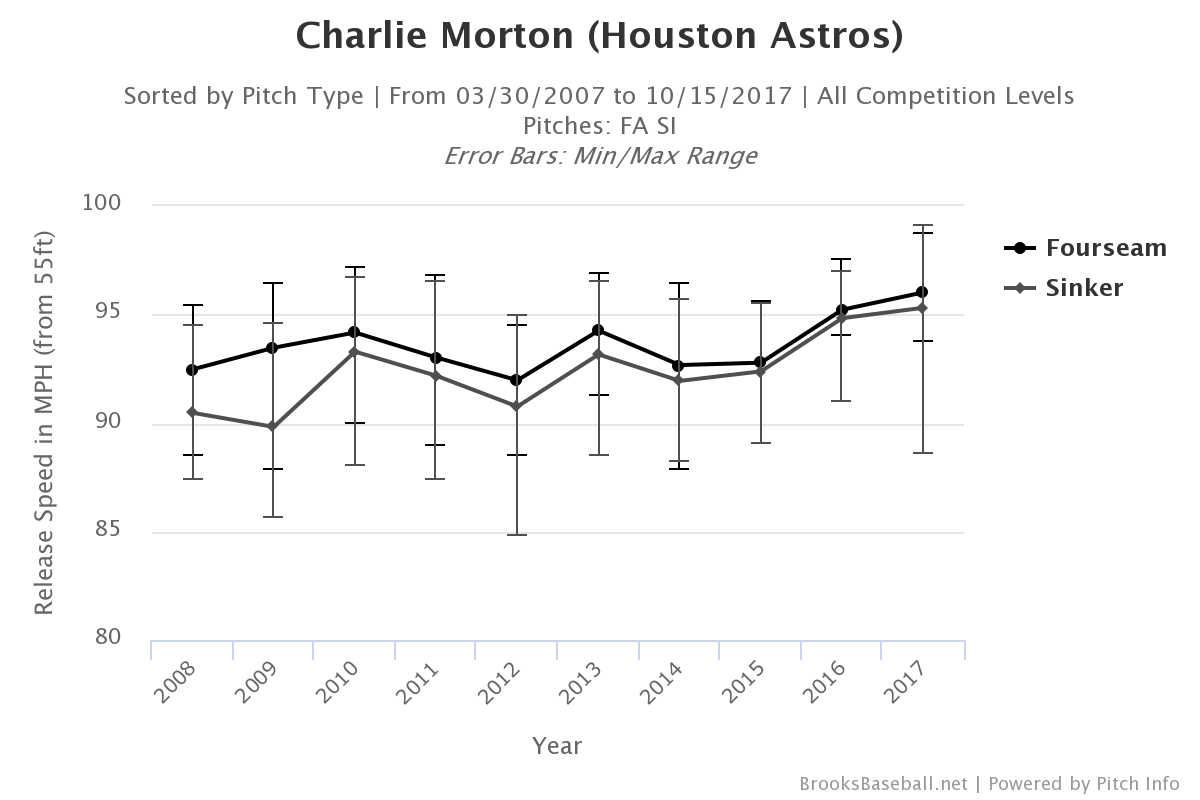 Huh. It’s not often you see a pitcher on the wrong side of 30 add velocity like that, but then again, everyone seems to be adding velocity these days, so maybe it’s not that unusual. Morton’s sinker and four-seamer sit in the mid-90s these days, and his top secondary pitch is a hard low-80s curveball. He’ll also throw a few upper-80s cutters and mid-80s splitters per start, though they’re not crucial to his success. For all intents and purposes, he’s a sinker/curveball guy.

Here, via Brooks Baseball, is Morton’s pitch selection against righties and lefties this season: 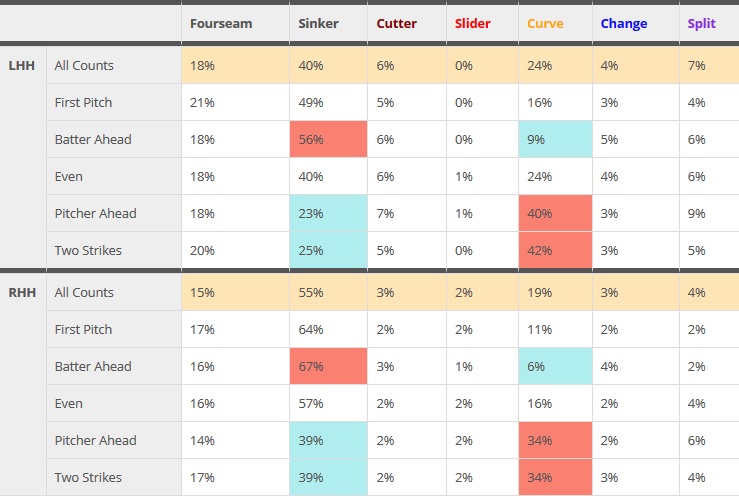 Get ahead with the sinker and put away with the curveball. Fairly standard. Morton isn’t as good at peppering the bottom of the strike zone as Keuchel (few are), though he generally does a very good job locating down in the zone. Verlander crushed the Yankees with fastballs up and down, and breaking balls at the knees. With Morton, almost everything is at the knees. Part of me wonders if the Astros will look to change up the scouting report by having Morton pitch upstairs with four-seam fastballs, even as waste pitches to change eye level. We’ll see.

There aren’t any good 2017 Morton videos out there, so here are his ten strikeouts against the Yankees in that May start. You can get a good enough look at the sinker and curveball here.

During his ALDS start last week, Morton’s location was pretty crappy and he left a lot of pitches belt high. The end result would have been much worse than two runs in 4.1 innings if a) the Red Sox had any power, b) some hard-hit balls didn’t find gloves, and c) Morton didn’t have enough movement on his pitches to occasionally miss the sweet spot even when he makes mistakes.

While I’m sure there is some sample size noise and general randomness at play here — Morton had a .347 BABIP against lefties from 2015-16 and a .244 BABIP against them this year, though that doesn’t explain the big uptick in strikeouts — it is worth noting the Astros got Morton to use his curveball more often against lefties early in the count. That makes him less predictable and, in theory, leads to fewer balls in play early in the count. If you know a guy is very likely to throw his fastball 0-0, 1-0, 0-1, or whatever, it’s easier to zero in.

The Astros have the worst throwing catcher tandem in the league (by far), yet through two ALCS games, the Yankees have attempted zero (0) steals. Obviously a lack of opportunity is part of that. In the two games so far the Yankees have had only seven stolen base opportunities, meaning a runner on first with second base unoccupied. Two of the seven were slow as hell Greg Bird, another was slow as hell Gary Sanchez, and another time the runner moved to second base on a wild pitch on the first pitch of the next at-bat. So, really, it’s only three stolen base opportunities.

Morton allowed only four stolen bases in five attempts this year, but throughout his career, he has been very susceptible to basestealers. Runners are 32-for-38 (84%) stealing bases against him since 2014. So yes, the Yankees can run on him. Should someone who can run (Gardner, Hicks, Jacoby Ellsbury, even Judge) reach base, they should test Brian McCann’s (or Evan Gattis’) arm. The offense is not clicking right now, so those extra 90 feet can be very valuable.

If the Yankees are going to come back to make the ALCS interesting, it has to start tonight, at home against Houston’s third starter. They’re not going to see Keuchel or Verlander until at least Game Five — ‘Stros skipper A.J. Hinch has already all but confirmed Keuchel will not start Game Four on short rest — so this is the time to make a move. Against the third and fourth starters at home. Morton had a very good regular season overall, but he’s also had some stinkers, including last time out in the ALDS.