Cooled off in Houston
The Yankees nine-game win streak came to a screeching halt on Monday as the offense flatlined, recording just three hits in a 2-1 loss.

Charlie Morton carved up the Yankees lineup with his nasty fastball-curve combo, taking a no-hitter into the sixth inning before Austin Romine crashed the no-no party with a single into right field. It was the third time this season the Yankee had failed to get a hit in the first five innings, the most such games of any team through Monday’s slate.

The silver lining in Monday’s debacle was the much-improved performance of Sonny Gray, who gave up two runs on four hits across six innings in his best start of the season. As we’ve noted before, first-pitch strikes and pitching aggressively when ahead are so critical for Gray in the batter-pitcher matchup.

Check out these splits from Monday, based on whether he started a batter with a first-pitch strike or a first-pitch ball and the result of the at-bat:

One thing that was different for Gray on Monday compared to his previous starts was an increased reliance on his four-seam fastball and the ability to generate swings-and-misses with the pitch, especially up in the zone.

42 of his 97 pitches were four-seamers against the Astros, a rate of 42 percent that was well above his 30 percent usage in his first five starts. He got five whiffs on those 42 four-seamers (12 percent), after netting just eight whiffs on the 125 four-seam fastballs (6 percent) he threw in his first five starts combined. As you can see below, all five of those whiffs (the pink dots) on Monday came in the upper third of the zone or higher: 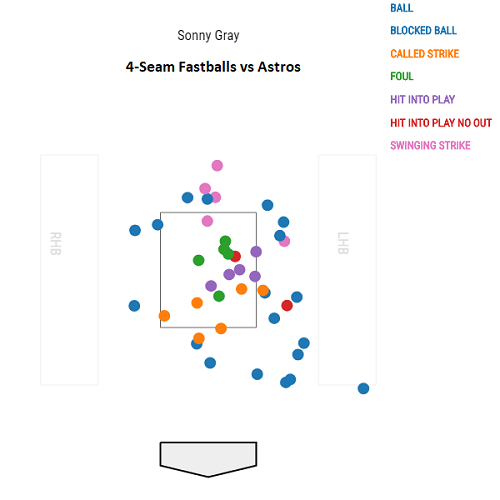 Deja vu for El Gary
For eight innings, the Yankees were caught in a recurring nightmare — getting totally dominated by Justin Verlander, again. The former Cy Young and MVP winner tossed eight scoreless innings, striking out 14 batters without a walk. Yet that ridiculous gem wasn’t enough to get him a win because …

… after the Astros ace was pulled following the eighth inning, the Kraken was released again, and when the final out was recorded, the Yankees had notched yet another stunning win.

And the Yankees still won. So, how improbable was this victory?

Only two other teams in baseball history has a team won a game in which the opposing starter struck out at least 14 guys while allowing zero earned runs and zero walks. On June 19, 2015, the Rangers beat the Chris Sale and the White Sox; on July 25, 2004, the Rockies beat Randy Johnson and the Diamondbacks.

Gary Sanchez ensured that Yankee fans would be celebrating on Tuesday night with one swing of the bat in the top of the ninth inning. With the score tied 0-0 and two men on base, he destroyed a first-pitch hanging slider from Astros closer Ken Giles, drilling the poor baseball 423 feet and over the centerfield wall.

#FunFact Alert! Sanchez is the seventh Yankee since 1925 to break a scoreless tie with a ninth inning home run, and just the fourth to do it on the road.

Even more amazing is the fact that El Gary pulled off nearly the same feat last week when he crushed his first career walk-off homer in the ninth inning against the Twins on April 26. Going back to at least 1925, Sanchez is the only player in franchise history to hit two go-ahead ninth-inning homers in a span of six days or fewer.

Sevy and Stanton Show
The Yankees extended their domination of the Astros into Wednesday, notching a second straight shutout, 4-0. It was the first time in franchise history they blanked the defending World Series champs in back-to-back games.

Giancarlo Stanton was a one-man show on offense, going 3-for-4 and driving in all four runs with two homers and an RBI double; the rest of the lineup was 6-for-32 (.188). He put the Yankees up early with a two-run shot in the first inning, lifting a sinker from Dallas Keuchel just over the fence in right field. With a projected distance of 339 feet, it was the shortest homer Stanton has hit since Statcast tracking began in 2015.

In his next at-bat in the fourth inning, he got hold of a down-and-in slider from Keuchel and drilled it into the left-field seats. Entering the game, Keuchel had pitched in nine games against the Yankees and faced 236 batters over 62 1/3 innings — and none of them had hit a homer. So, of course, the newest Bronx Bomber, Stanton, hit two homers in his first two plate appearances as a Yankee against Keuchel.

This was Stanton’s 30th career multi-homer game, and coming in his 1,016th career game, he became the third-fastest in MLB history to reach 30 multi-homer games. The only guys who did it in fewer games were Juan Gonzalez (1,004) and Ralph Kiner (743).

Luis Severino was a one-man show on the mound, going the distance for his first career complete game and shutout, striking out 10 over nine brilliant innings. At 24 years old and 71 days, he was the youngest Yankee to pitch a shutout since Sterling Hitchcock on May 21, 1995 vs Orioles, and the youngest to throw one with double-digit strikeouts since Stan Bahnsen on August 1, 1968 against the Red Sox.

Is there any doubt that Sevy has cemented himself as the staff ace and one of the very elite pitchers in baseball right now?

#LoveThisTeam
The Yankees capped off one of their most impressive road trips in recent memory with a thrilling comeback win in Houston on Thursday. Nothing seems to faze these pinstriped Comeback Kids, who staged yet another stunning rally in the ninth inning and won for the 12th time in their last 13 games.

The Yankees are the only team in the majors this season with three wins in games they trailed at the start of the ninth inning.

The late-game heroics were needed after the Yankees pitchers imploded in the seventh inning, snapping their most dominant stretch of run prevention in nearly a decade. When the Astros scored four runs in that frame off Masahiro Tanaka and Chad Green, it ended a 28-inning scoreless streak, the longest by a Yankee pitching staff since August 7-9, 2009 against the Red Sox (31 innings).

The wild ninth-inning comeback was highlighted by the newest Comeback Kid, Gleyber Torres, who produced his first True Yankee moment with a bases-loaded two-RBI single that knotted the game at 5-5. Combined with his second-inning sac fly, Torres became the youngest Yankee with a three-RBI game since Derek Jeter on June 4, 1995 against the Angels at Yankee Stadium, and the youngest to do it on the road since Bobby Richardson on September 25, 1955 in Boston.

Aaron Judge clinched the inspiring comeback with an RBI groundout that scored Aaron Hicks from third base. It was his 143rd career RBI in the regular season, but the first one in the ninth inning or later that gave the Yankees a lead.