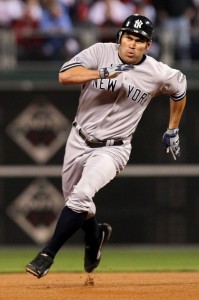 The Yankees are often accused of relying too much on the homerun, and at times that can certainly appear to be true. We all know they can sit back and rake with the best of ’em, but how well did the Bombers create runs on the bases last year? After taking a detailed look at Robinson Cano’s baserunning exploits yesterday, now it’s time to examine the Yankees as a whole.

As a team, the Yanks stole 111 bases in 2009, led by Derek Jeter’s 30. It was their fourth straight season with triple-digit steals, and not only did the team swipe a boatload of bases, they stole them efficiently. Their 80% success rate was the second highest in baseball, well above the break-even point of 72-75%. According to Baseball Prospectus’ EqSBR, the Yanks were 3.92 runs better than expected in 2009 given the number and quality of stolen bases they attempted, trailing only Texas for the best mark in baseball.

Note: Make sure you read yesterday’s post on Cano for info about BP’s baserunning stats.

However, stolen bases are only on part of the baserunning equation. Going from first-to-third on a single, moving up on a wild pitch, advancing from second to third on a ground ball to the right side, stuff like that also contributes to a team’s ability to score runs. Unfortunately, the Yanks were absolutely brutal at what we’ll call non-stolen base baserunning last year.

Following the lead of Erik Manning at FanGraphs, we can determine how well – or how poorly – the team performed in these non-stolen base baserunning situations using some more fancy BP stats. By subtracting EqSBR from EqBRR, we’ll know how well someone (or in this case, the entire team) performed on the bases while doing something other than stealing. As I said earlier, the Yanks sucked in these spots, coming in at more than ten runs below average, third worst in baseball behind only the Braves and Orioles. Here’s the player-by-player breakdown: 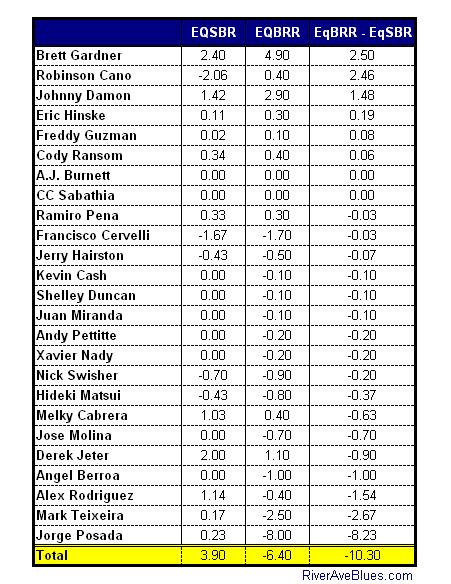 Since ten runs equal one win, the Yankees cost themselves more than a win with their non-stolen base baserunning in 2009, which is dreadful. On the flip side, the Rockies, Cardinals, Twins, and A’s all added a win to their team’s ledger via their baserunning, so congrats to them. The data in the table forms a nice bell curve, as most of the players are scrunched in the middle (say from -0.50 to +0.50 runs) with just a handful at the extremes.

Brett Gardner, unsurprisingly, was the best baserunner on the team, and we already went over Cano yesterday. Johnny Damon has been a tremendous baserunner his entire career, and that proved true again this year as he was the only other player on the team to make a significant contribution with his non-stolen base baserunning. After those three though, the team’s baserunning is pretty non-existent. Well that’s not true, it exists, it’s just so bad that it hurts the team.

Jorge Posada, obviously, is the worst offender. In fact, out of the 845 players that ran the bases at least once in 2009, Posada’s non-stolen base baserunning ranked … wait for it … 845th! Melvin Mora (-7.80 EqBRR-EqSBR) was the only other player in baseball who’s non-stolen base baserunning cost his team more than 6.5 runs. Posada’s baserunning was that bad. Of course, he’s a 38-year-old catcher that has caught almost 12,200 innings in his career (not counting playoffs) and battled a hamstring issue early last year, so he’s expected to be slow, just not this awful at baserunning. He’s redefined station-to-station.

Moving away from Posada, who almost singlehandedly cost the Yankees a win with his baserunning, the tandem of A-Rod and Mark Teixeira cost the Yankees 4.21 runs with their non-stolen base baserunning last year, though they more than make up for it with their bats. Both guys were below average when it comes to advancing on base hits according to BP’s data, though A-Rod has a built-in excuse with his hip surgery while Tex is just noticeably slow. Alex has traditionally been a positive baserunner in those situations, so hopefully he’ll rebound in the future as he gets further away from his hip surgery. Tex’s baserunning performance was right in line with the rest of his career, so don’t expect any sort of rebound.

Angel Berroa managed to cost the Yankees a full run on the bases despite being on-base just twelve times in pinstripes (four hits, one hit by pitch, seven pinch running appearances). Derek Jeter was a below average baserunner in 2009 almost entirely because of his performance on sacrifice flies, however that doesn’t jive with how he performed in those spots in recent years, so expect him to get back on track next year. We knew Jose Molina would be awful on the bases, while everyone else’s performance was pretty negligible and right around average.

The good news is that with expected rebounds from A-Rod and Jeter, plus continued improvement from Cano and the possible arrival of Austin Jackson, the Yankees should be a better baserunning team next year. Posada’s a lost cause on the bases in every way, so that’s a big hurdle for the team to overcome if they plan on being a positive baserunning team going forward. For what it’s worth, the Yankees were more than a run above average on the bases in 2008 (I’m guessing it’s because Posada was hurt most of the year), so it’s not out of the realm of possibility.

As the Yankees continue to follow through on their plan to get younger and more athletic, one of the first places we’ll notice it is on the bases. Younger legs mean more first-to-thirds, more steals, and more risky advances, but as the data shows, it’s not really a huge part of the game. Despite being the third worst baserunning team in the game, the Yanks cost themselves only one win over the full 162-game season. On the other hand, the best baserunning teams only improved by one win. A win is a win, but sacrificing a little on the bases in exchange for a considerable advantage elsewhere (like living with Tex’s baserunning because of his bat and defense) is perfectly acceptable in my book.