River Ave. Blues » Yanks hit Angels hard in Stadium return
Noesi dominates again while Montero comes up with a big hit
Scenes from the destruction across the street

Derek Jeter said it best: “It feels like the season doesn’t get started until we play the home opener.” While the past week of baseball has provided nothing but enjoyment, the man has a point. Getting off the 4 train, walking to the Stadium among fellow die-hards, ascending the staircase to the grandstands — it made baseball seem real again. It helped that the Yankees continued their hot start, slapping around the Angels, at least for the first eight innings, en route to their fifth win of the season.

As he’s done so many times since moving to the leadoff spot, Derek Jeter swung at the first pitch of the game, a 92 mph fastball from Ervin Santana. He pulled the inside pitch to Brandon Wood at third, who tossed the ball across the diamond to Kendry Morales for the first out. The Yankee Stadium speakers then played an odd tune for a ballgame, “Party in the USA” by Miley Cyrus. It was the at-bat music for the No. 2 hitter, Nick Johnson, who had chosen it because of his daughter.

Hopefully he changes it tomorrow.

It appeared that Santana and catcher Jeff Mathis had a plan. The first, a fastball, hit the outside corner for called strike one. They went back outside on the second pitch, but that one missed considerably, evening the count at 1-1. Again Santana went for the outside fastball, but this one caught a bit too much of the plate. Johnson laid into it, crushing it into the right field bleachers for the first home run in his return to the Yankees. It boosted the Yankees’ chances of winning by 9.5 percent, a good shift for the first inning.

Honorable Mention: Jeter to the pen

After retiring Jeter on just one pitch in the first, Ervin Santana fell behind 2-0 during their second battle. He missed with a fastball high for ball one, and then couldn’t catch the inside corner with a backdoor slider. The next pitch he served up, a 91 mph fastball down the middle. Jeter put a pretty swing on it, and put the Yankees up 2-0. That one, according to WPA, was worth just slightly less than Johnson’s shot, a 9.2 percent increase. With Andy rolling through three, the second solo homer of the game was a good base for the Yanks.

I bet you weren’t expecting that. Most people, I’m willing to bet, would have rated Bobby Abreu’s ninth-inning grand slam off David Robertson as the biggest hit for the Angels. This presents an opportunity to explain the underpinnings of WPA. Even though Abreu’s home run put more runs on the board than any other Angels’ hit, it didn’t necessarily bring them any closer to winning the game. After he hit it, his team was still down by two runs and had the bases empty with just two outs remaining. The odds of them winning at that point, in other words, were not that good.

In the fifth inning, however, thanks to some missed opportunities, the Yankees held just a 3-0 lead. Jeff Mathis singled to lead off the inning. When the next batter, Brandon Wood, walked, the Angels brought the tying run to the plate. This represented a 6.4 percent gain in WPA, because it brought the Angels closer to tying the game. Similarly, in the sixth inning Juan Rivera singled, advancing Howie Kendrick to third. That again brought the tying run to the plate, and was also a 6.4 percent gain in WPA.

Both of those hits brought the tying run to the plate. Abreu’s did not. It might have put the Angels in a better position to come back, but it did not directly lead to a game-tying opportunity. Wood’s and Rivera’s at-bats did. That is why they were credited with a 6.4 percent gain in WPA, while Abreu’s homer brought the Angles just 2.6 percent. The odds of them scoring two more runs with the bases empty and one out were just not that high.

As described above, Juan Rivera singled with one out in the sixth to bring the tying run, Howie Kendrick, to the plate. Pettitte got ahead with a cutter, but missed the zone with his next three pitches, tipping the count in Kendrick’s favor. Pettitte delivered his second straight fastball, a hittable pitch about thigh high and over the plate, and Kendrick grounded it right to Jeter. He flipped to Cano, who threw to first to complete the double play and end the minor threat.

Looking back on the at-bat in Gameday, it could have turned out much worse. Kendrick is a dead fastball hitter. Pettitte delivered a pretty hittable fastball in a hitter’s count. It could have been a turning point for the Angels. Instead, it was the biggest negative WPA swing on offense for them.

Andy Pettitte does not look like a strikeout pitcher. His fastball hits low 90s at times, but he works mostly off his secondary stuff — the cutter/slider, the curve, the change. He uses it effectively, tough, keeping hitter off-balance by mixing his pitches well. Of his 100 pitches, only 52 were fastballs. He mixed in 25 cutters, 14 curveballs, and eight changeups — plus one unclassified pitch. He did allow eight baserunners in the game, five hits and three walks, but he helped stifle them by striking out six. It was all part of another quality start by Pettitte.

Matsui’s ovation, obviously. The fans cheered him when he received his World Series ring, but the biggest ovation came when he came to bat in the first inning. We all miss Matsui, though with the way the team’s playing right now I’m not sure many people particularly care. That, of course, will change, and then change back, multiples times during the season. Have I mentioned that I love baseball?

Posada just continues to destroy the baseball. He went 3 for 4 yesterday with two doubles, raising his season average to .429. It won’t last all season, obviously, but it’s a nice opening statement from a guy who had a few question marks heading into the season.

Robinson Cano also has been hammering the ball out of the gate.

Also, Chan Ho’s outing was nice as well. The home run was a bit annoying, but it was Kendry Morales and he’ll do that sometimes. Otherwise, Park looked strong again.

The ninth inning, obviously. It really couldn’t have been worse for Robertson. He actually got a gift, in that Kendrick did not score from second on Brandon Wood’s single. He then struck out Erick Aybar, a good sign. The Yankees could afford the run if Robertson needed to trade one for an out. Instead he threw two fastballs to Abreu, both around the same spot, and watched the ball fly out into the right field stands. Again, it didn’t really bring the Angels a ton closer to winning, especially since the home run brought on the save situation. Still, highly annoying.

The Yankees also failed to cash in some baserunners early in the game. Had Andy run into trouble that would have been even more annoying. They did rack up seven runs on 13 hits, though, so I guess it balanced itself by game’s end. 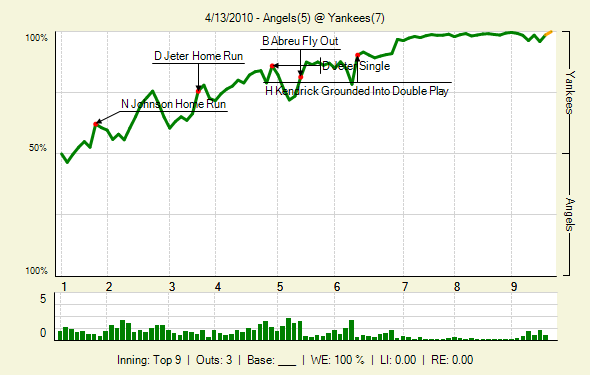 As always, to FanGraphs with you for the full WPA breakdown, play log, and box score.