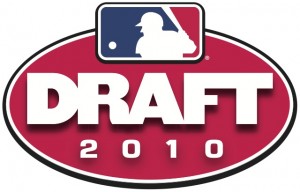 After three days, 50 rounds and (by my count) 16 total hours of selections, the 2010 MLB Draft has come to an end and the focus shifts to signing these player. Yesterday was your typical day of late round selections; the Yankees drafted mostly college players to fill out minor league rosters (those guys are important, they take a lot of the load off the actual prospects) plus a few high school lottery tickets, led by Pennsylvania righty Keenan Kish (34th round).

My summary of the Yanks’ draft strategy still applies simply because not much could have been done on Day Three to change things. In many ways this resembles the Eric Duncan-Tim Battle-Estee Harris draft of 2003, when the Yanks looked for athleticism and shot for the moon with upside. That might sound bad, but seven years ago the Yankees had no interest in using the farm system for developing players. They didn’t try develop players, they tried developed trade bait. The current Brian Cashman led regime certainly has a dedication in player development,which makes this draft much more promising. Scouting director Damon Oppenheimer drafted 20 high school players this year, easily the most in his six years at the Yanks’ helm. It’s very clear they were looking to not just infuse the farm system with some youth and upside, but develop that talent into cheap big league production.