Thirty days ago, Robinson Cano’s triple slash line bottomed out at .273/.317/.488. He had just six unintentional walks to his credit in 186 plate appearances, and his 28 strikeouts put him on pace for 101 over a full season. It’s been four years since Cano last struck out more than 77 times in a season, and never once has he cracked the century mark. Hell, he’s never cracked the 90 strikeout mark. Although he was still performing at a rate better than the league average second baseman, it was still fair to consider Robbie’s season a disappointment given his lofty standards. 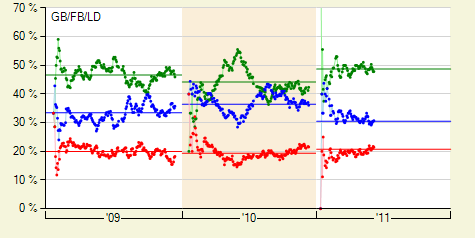 Hopefully I don’t have to tell you that fly balls tend to go for extra base hits a lot more often than ground balls, so maybe this means the power stroke is unsustainable. Cano’s BABIP (.302) is down compared to both last year (.326) and his career mark (.321), but it’s been on the way up during this recent hot streak. Unsurprisingly, so has his line drive rate. Overall, he’s raised his season batting line from .273/.317/.488 thirty days ago to .295/.341/.520 today.

Although Cano has picked up the pace over the last month, he still isn’t completely out of the woods. He’s still swinging at a career worst 40.1% of pitches out of the zone, though it’s worth noting that that’s down from 41.7% on May 19th, when I wrote this post. The 3.26 pitches he’s seen per plate appearance rank 160th out of 161 qualified batters (thanks, Yuni), but again that is up from 3.16 P/PA on May 19th and is at least approaching his career average (3.33). The strikeout rate has been slowly getting better, but he’s still on pace for a career high 96 whiffs. I don’t care too much about the strikeouts (plus 96 isn’t all that many anyway), I’m just concerned that he’s hacking at pitches he can’t do anything with. I know Robinson won’t ever be a 100 walk, .400 OBP+ guy, but some semblance of plate discipline would be nice.

It’s worth noting that throughout his career, Cano has typically been a slow starter, slow in that he has been less awesome in April and May and really awesome from June on. Here’s the splits if you don’t believe me. Last year was quite the opposite though, he started out on fire then cooled off. Perhaps that was just the outlier and he’s following his normal path this year, starting slowly before raising hell the rest of the way. I sure hope so, that would be sweet. Anyway, Robinson’s rebound from a start that can be described as slow only by his standards has gone almost completely unnoticed, but it’s a big part of the reason why the Yankees have gotten on a nice roll here and are willing games consistently. He’s not a kid anymore, Cano’s a veteran player and is being relied upon as a core member of the team, and right now he’s quietly producing like one.