I’ll preface this by saying that nowhere have I read that the Twins are interested in moving Scott Baker, nor have I read that the Yankees would have any interest in acquiring him. This is simply pure Hot Stove speculation, taking a statistical look at whether or not a given player fits the team’s needs.

Mike reviewed a potential Baker acquisition last offseason, and concluded that, while the fly-ball percentages have been downright scary (his 45.0% FB% since 2007 is the 3rd-highest among AL pitchers during that time; though interestingly Jered Weaver tops the list), the minuscule walk rate (9th-lowest in the AL during that same time, and four of the players ahead of him on that list are no longer in the junior circuit) has helped mitigate some of the long ball damage, the right-handed Baker would be an asset to the Yankee rotation, fly-ball tendencies be damned. Mike also noted that the Twins’ asking price would likely be Banuelos or Betances due to Baker’s solid track record and team-friendly contract, and while Baker could be a helpful mid-rotation piece, there’s obviously zero chance the Yankees would surrender either pitcher for a slightly above-league average pitcher with a fly-ball rate that would make Phil Hughes (45.2% since 2007) jealous.

However, Baker just concluded the finest season of his career, and with the Twins a few years away from returning to contention no matter how wide-open the AL Central always seems to be, perhaps they’d entertain the thought of moving Baker, who, it should be noted faced the third-toughest Quality of Opponent in all of MLB in 2011 (which admittedly was the impetus behind this post). After all, they finally traded the long-rumored-to-be-on-the-move Kevin Slowey to the Rockies yesterday, and while Slowey and Baker aren’t quite in the same league pitching-wise, they’re also not that different.

Additionally, were the Twins open to trading him there’s no way they could realistically expect a Killer B, now that he has one year left on the extension he signed back in 2009 that will pay him $6.5 million for his services this coming year — his age 30 season — with a $9.5 million option for 2013. Not only that, but I’m actually fairly surprised that Baker hasn’t already been run out of town given that his K/9 jumped up above 8.0 per nine to a career-high 8.22 that would’ve been the 10th-best rate in the AL had he had enough innings to qualify. Certain Twins fans may realize the importance of the almighty K, but Minnesota’s modus operandi has been pitching-to-contact for as long as I can remember.

Here’s a snapshot of Baker’s career: 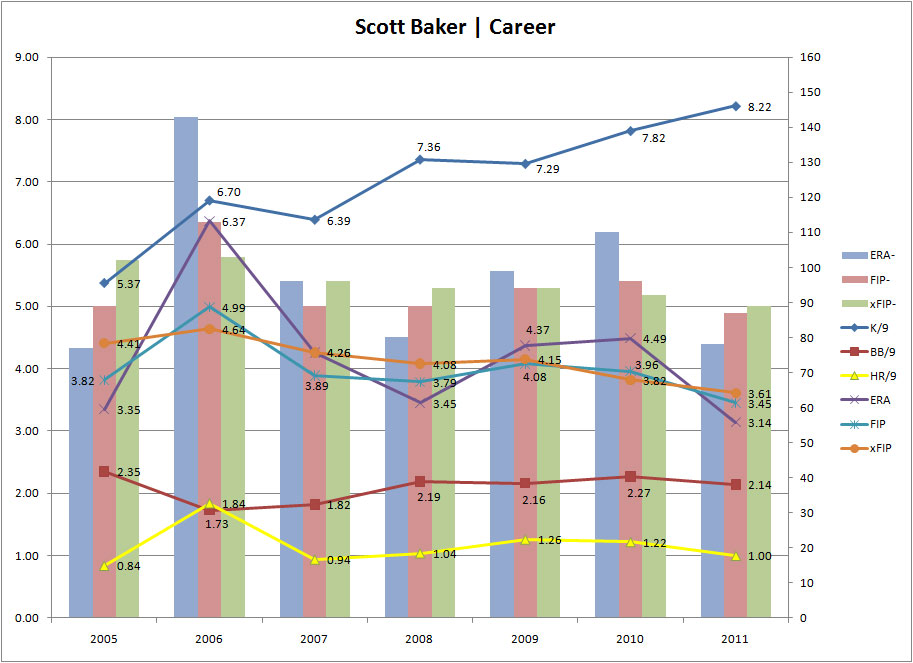 Baker posted career-bests nearly across the board in 2011, although while he had a very nice (if injury-shortened) year I don’t think we can reasonably conclude that Baker’s all of a sudden now a true talent 3.14 ERA/3.45 FIP pitcher unless he’s found something/made some kind of adjustment that will limit the home runs going forward. His 2011 BABIP was right in line with his career mark even though his strand rate was at an all-time high, yet he posted a lower GB% rate (34.3%) than he did in 2010 and a slightly higher FB% (44.7%). xFIP saw him as a 3.61 ERA pitcher, which seems a bit more realistic, although those expecting the career 4.12 hurler to post a mark in the mid-3.00s could be a bit disappointed.

Given that his rate stats don’t appear to be able to explain Baker’s improvements across the board, I was curious to see whether he’d made any adjustments to the way he went after hitters. Here’s a breakdown of Baker’s repertoire over the last three seasons, courtesy of TexasLeaguers.com: 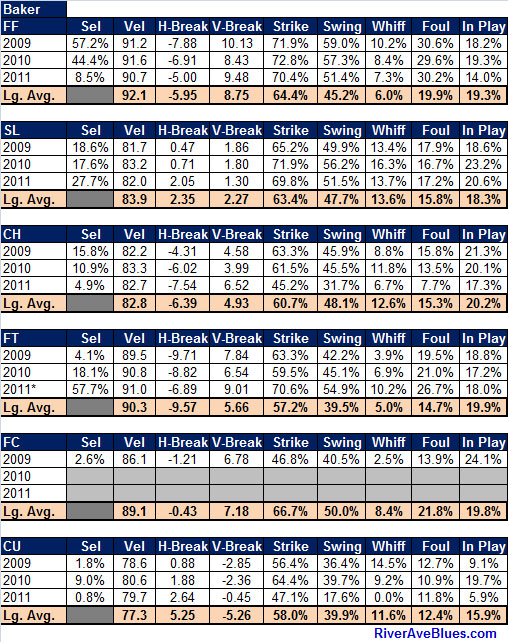 According to the PITCHf/x data, current-day Scott Baker is ostensibly a three-pitch pitcher: two fastballs, the requisite four-seamer and a sinker, and a slider. He has a changeup, but only threw it 5% of the time last season. However, if the PITCHf/x data is to be believed, Baker completely overhauled his arsenal in 2011.

In 2010 he threw a four-seamer 44.4% of the time; according to this data in 2011 that fell all the way down to just 8.5%. Apparently all those heaters were replaced with what the system classified as a sinker (though the previous two years of data had it as a two-seamer), which Baker threw 57.7% of the time this past season, up from 18.1% in 2010 and just 4.1% in 2009. Now, the usual caveats with pitch classification apply, and it’s likely that a fair percentage of Baker’s four-seamers were misclassified as sinkers, although per this article from July, it sounds like Baker does actually throw a sinker now.

Still, even if he did increase his sinker deployment, it seems highly unlikely he threw them nearly 60% of the time this past season, as he almost certainly would’ve generated a higher ground-ball rate. The 10.2% Whiff% on the sinker lends additional credence to the misclassification, as it seems highly unlikely that Baker would double the league-average Whiff rate on a pitch that carries the lowest average Whiff rate among all pitches for right-handed pitchers.

So assuming Baker hasn’t turned into Chien-Ming Wang — and the 8.22 K/9 further suggests this to be the case — we have a right-hander with a below-average four-seamer velocity-wise (only 90.7mph), a sinker/two-seamer that doesn’t even get ground balls 40% of the time, and a slider that appears to be right around league average. I have to say I’m a bit baffled at how Baker managed such a robust K rate given this information — I suppose the movement on his four-seamer, as cited in the aforelinked article from Twins blog Twinkie Town, is outstanding, and results in a lot of weak contact, although that 30.2% foul-ball rate is not only pretty out-of-control but would also make Phil Hughes blush.

Those are fine mid-rotation numbers, but the Yankees have enough internal candidates who can attempt to put up reasonable facsimiles of those projected lines; I can’t see moving anyone for a 30-year-old with one very good year under his belt and nothing in the numbers that would indicate continued higher-level success.