River Ave. Blues » A Down Season for Dellin Betances is a Great Season for Most Relievers [2016 Season Review]
The Yanks have shown interest in Kendrys Morales, who'd be a pretty good fit, actually
Prospect Profile: Clint Frazier

It’s not often a team can have a reliever as dominant as Dellin Betances be the third best option in their bullpen. In fact, there’s a pretty good chance that never once happened in baseball history prior to this season. Coming into 2016, Betances was third on the Yankees’ bullpen depth chart behind Andrew Miller and Aroldis Chapman. Wild.

Betances was the only one of those three to make it through the season with the Yankees, but I’m guessing had another team presented Brian Cashman with a massive offer at the trade deadline, Dellin would have been gone too. Instead, he remains with the Yankees and is coming off his worst full season in the big leagues. Of course, Betances was still one of the most dominant relievers in baseball.

When the season started, Betances was back in a familiar role: eighth inning guy. Chapman had to serve his 30-game suspension, which meant Miller closed and Betances set up. And on Opening Day, Dellin took the loss after allowing three unearned runs on one hit and two walks in two-thirds of an inning. It was his own error that opened the floodgates.

The Yankees actually played that game under protest. Joe Girardi argued Carlos Correa was in the baseline and impeded Betances’ throw, but that wasn’t going to hold up, so the protest was dropped after the game. The Astros won the game thanks to the error and Dellin was saddled with New York’s first loss of the new season. So it goes.

Following that game, Betances went on a two-month rampage. He took all his frustration out on opposing hitters. In his next 23 appearances following the error, Dellin struck out 45 (!) in 22.2 innings. He allowed five runs and walked only three. That’s a 54.2% strikeout rate and a 3.6% walk rate. At one point Betances struck out 21 of 29 batters faced in mid-April. I mean, geez.

Weirdly enough, that insane early-season stretch included a stretch of games in which Betances allowed a home run in three straight outings. He’d never done that before. It proved to be just a blip though; Dellin allowed zero home runs in his next 45 games and 45.2 innings. Betances finished the first half with a 2.66 ERA (1.17 FIP) with 45.1% strikeouts and 5.8% walks in 44 innings. That earned him his third straight All-Star Game selection. He’s the only reliever selected to each of the last three All-Star Games.

Dellin threw a scoreless seventh inning with a two-run lead in the Midsummer Classic, and it went strikeout (Corey Seager), single (Daniel Murphy), fly out (Paul Goldschmidt), strikeout (Nolan Arenado). Then, in his first seven outings after the All-Star Game, he allowed one run and struck out eleven in 6.1 innings. That took the Yankees to the trade deadline. Chapman and Miller were gone, so Betances took over as closer.

In his first five weeks as closer, Betances went nine-for-ten in save chances — in the one blown save, he inherited a runner on third with one out in the eighth and allowed a game-tying sac fly — and struck out 21 in 12.1 innings. Typical Betances. On September 4th, he needed 12 pitches to strike out two and retire all four batters he faced. On September 5th, he needed ten pitches to fan two and retire all three batters he faced. That was the last time we saw a consistently effective Betances in 2016.

The Stumble to the Finish

Following that September 5th game, Dellin had a 2.05 ERA (1.43 FIP) with excellent strikeout (44.7%) and walk (7.8%) rates in 66 innings. It was a typical Betances year. It all started to fall apart on September 6th, in his third straight day of work. Betances allowed two runs on two hits and three walks — only 22 of his 40 pitches were strikes — in one-third of an inning against the Blue Jays. Blake Parker had to bail him out with an assist from Brett Gardner’s leaping catch.

Three days later, Betances allowed a run on three hits in one inning of work. Five days after that, he allowed two unearned runs in an inning thanks in part to his own throwing error. (A Starlin Castro error opened the inning.) Dellin shot-putted a comebacker to the backstop. Yuck. Then, the following night, Betances served up the most devastating home run of the season, Hanley Ramirez’s postseason hopes crushing walk-off blast. I’m not even sure why I’m embedding this video but:

Welp. That was: bad. Worst game in a long, long time. And because that wasn’t bad enough, Betances allowed two runs on a hit and two walks ten days later. And the day after that, he allowed another two runs (one earned) on two walks while retiring zero batters. That’s 13 runs (ten earned) in the span of eight games and six innings. Dellin closed out his season by striking out the side with authority in Game 161, but by then the damage had been done. His September was dreadful.

The Sudden Loss of Control, Again

Following 136 games of total domination, Betances hit a wall in the final 26 games, and I thought he looked worse than he had at any point since arriving in the show for good back in 2014. The problem was control; Dellin walked eight in his final seven innings. This was the second straight year he was completely unable to locate late in the season too. 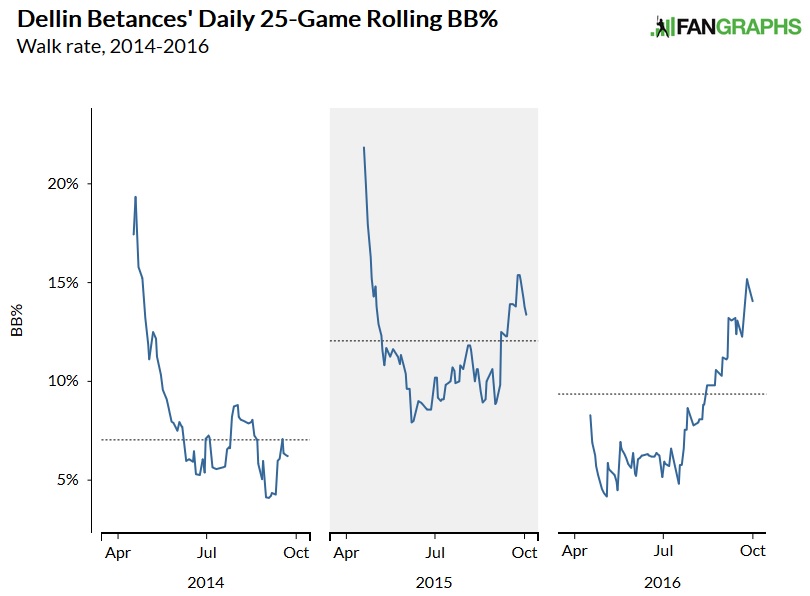 Once is a blip, twice is a trend. I know Betances has a long history of control issues, so it’s not completely unexpected anytime he loses the strike zone, but when it happens so suddenly late in the season two years in a row, it’s hard to chalk it up to coincidence. Fatigue sure seems like a potential problem, especially since he looked visibly gassed on the mound. He had to put more effort into each pitch and that’s never good.

I have no idea whether fatigue is the root cause of Betances’ late season control problems the last two years. The circumstantial evidence points in that direction but we don’t really know. Whatever it is, it’s now happened two years in a row, and this year was much worse than last year. The Yankees want to win the World Series against some day. The sooner the better. If Dellin is running out gas in September, what happens in October?

The Unignorable Inability to Hold Runners

This is a big problem. It’s not a fatal flaw the same way Jon Lester’s inability to hold runners isn’t a fatal flaw, but it is a big problem. Betances mostly pitches in the late innings of close games, when those extra 90 feet can be a pretty big deal. He doesn’t even had a pickoff move. If he does, I can’t ever remember seeing it. Betances varies his times to the plate and he has a slide step, but obviously they’re not enough. Runners are still going at will.

Now here’s the thing: Dellin is never going to be good at holding runners. Tall right-handed pitchers rarely are. Base-stealers have an 87.2% success rate against 6-foot-10 Chris Young, for example. At least tall lefties like CC Sabathia and Randy Johnson had the advantage of staring the runner down at first base. Betances, with that high leg kick and slow delivery to the plate, doesn’t give his catcher a chance. Even with Gary Sanchez’s rocket arm behind the plate, runners still went 6-for-6 against Dellin.

Betances doesn’t have to develop an Andy Pettitte pickoff move (or a Nathan Eovaldi pickoff move!). But he has to develop a pickoff move. Something he can put in the back of the runner’s mind. Even if it’s only a lob over to first, it’s better than nothing. Betances is so insanely good that he’s been one of the two or three most dominant relievers in baseball without holding runners the last three years. This is a flaw teams are going to take advantage more and more in the future though, so it’s something he has to work on.

The idea Betances can’t handle the pressure of being the closer would hold water if, you know, he hadn’t completely dominated in his first five weeks on the job. Also, he’s been throwing high-leverage innings for the Yankees for three years now. The guy has excelled in pressure situations since 2014. He’s shown us he can do it. If you don’t think he can handle the ninth inning, then there’s nothing I can tell you to change your mind.

Anyway, as it stands right now, Dellin is the Yankees’ closer. There’s a pretty good chance that will change this offseason because the Yankees are in big on the top free agent relievers, including Chapman. And you know what? Signing Chapman or Kenley Jansen to close would make the Yankees a lot better. I mean, duh. Those guys are great. It wouldn’t make them better because Dellin can’t close, but because he can slide back into that dynamic setup role where he has been such a weapon the last few years.

Betances is still excellent and the Yankees are lucky to have him in their bullpen. I think they have to seriously consider lightening his workload next year — that doesn’t mean he can’t ever go multiple innings, just that he can’t do it as often — perhaps getting it down into the 60-65 innings range. A normal short reliever workload. Also, working on controlling the running game is a must. Betances is still great despite those flaws. He’s just not quite as overwhelming as he was two years.