Threes are wild
The Yankees had a successful homecoming on Tuesday as they kicked off a critical nine-game stretch in the Bronx with a win over the Reds.

Todd Frazier, wearing the traditional pinstripes for the first time, had perhaps the most unforgettable and unusual Yankee Stadium debut ever. In his first at-bat, he lined into a triple play — which would be quite memorable on its own — but turned into a statistical bonzai when Matt Holliday scored a run as Didi Gregorius got caught in a rundown for the third out.

Didi redeemed himself after his triple play TOOTBLAN by driving in two runs, including his 15th home run of the season, five shy of the career-high he set last year. In the long and storied history of the franchise, Gregorius and Derek Jeter are the only shortstops with multiple 15-homer seasons.

Jordan Montgomery bounced back from his career-worst performance against the Twins last week to throw one of his best games as a major-leaguer. He took a no-hitter into the sixth inning and finished with this stellar pitching line: 6⅔ innings, one run, two hits, six strikeouts, one walk.

It was the second time Monty has pitched that deep into a game while giving up no more than two hits, as the 24-year-old became the youngest Yankee since Dave Righetti in 1981 with two such starts in a season.

Aroldis Chapman threw a scoreless ninth for his 12th save but he was hardly dominant, failing to record a strikeout for the sixth time this season. Four of those outings have come since the All-Star break, making this the first time in his career he’s had a two-week stretch with at least four zero-strikeout games.


Summer of Severino
In a throwback performance to the scoreboard-dominant days of April and May, the Yankees used their tried-and-true formula of brilliant starting pitching and pinstriped power to complete the mini-sweep of the Reds.

Luis Severino tossed another brilliant gem, going seven strong innings while allowing only two runs (both unearned) with nine strikeouts, and added to his ace-like resume:

Severino was in peak-dominant form, generating 20 swings-and-misses, the second-most in any start in his career. He climbed the ladder with his fastball to get four of the whiffs, but mostly buried his changeup (5) and slider (11) below the knees to make the Reds look like little-leaguers at the plate. 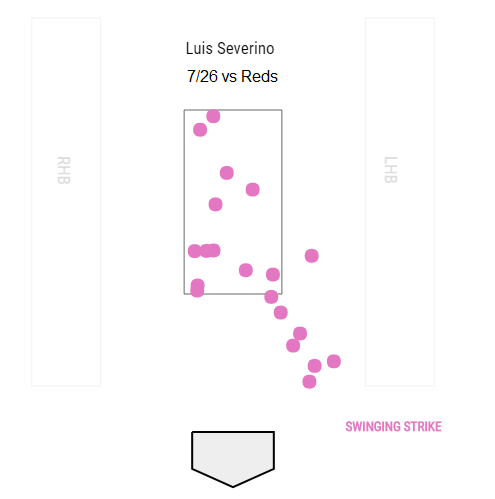 Six of his nine strikeouts came with his filthy hard slider, giving him 85 on the season with that pitch, the fourth-most in baseball behind Chris Archer, Chris Sale and Max Scherzer.

Clint Frazier continued to shine on the big-league stage, as he delivered two key run-scoring hits with men on first and second in the third and fifth innings. He’s now 6-for-14 and has 10 RBIs with runners in scoring position, nearly matching the output of Jacoby Ellsbury (7-for-40, 12 RBI) in those situations for the entire season.

Didi Gregorius’ scorching-hot bat provided more fireworks on Wednesday. He went deep in the seventh inning, extending his homer streak to a career-best three games, and also etched his name alongside some Yankee legends. Didi is just the fifth shortstop in franchise history to hit a home run in back-to-back-to-back games: Derek Jeter (twice in 2012), Tom Tresh (1962), Gil McDougald (1957) and Tony Lazzeri (1927) are the others.