You can forget about Aaron Judge participating in the Home Run Derby anytime soon. Last week Judge told Ken Davidoff and Anthony Rieber he is done with the event despite the new $1M winner’s prize. “The only thing that will make me want to participate would be if the All-Star Game would ever be in New York City again,” he said.

“Maybe if the All-Star break was a week long and I actually had a break, I would be more enticed to do it. But the money doesn’t change it,” Judge added. “It affected me because I hurt my shoulder. But my swing-wise, no. I was just taking BP. That was probably the worst thing having to hear every single day, people saying, ‘Did it affect you?’ Nah, it was a day of BP. It doesn’t really affect me. If I didn’t get hurt, it would have been a different story.”

Judge won the 2017 Home Run Derby with hilarious ease, but he hurt his left shoulder crashing into the outfield wall about a week before the event, and it wasn’t until last season that he admitted the Home Run Derby exacerbated the injury. The shoulder injury required offseason arthroscopic surgery and likely contributed to his August 2017 slump. All is good with the shoulder now though, thankfully.

The Yankees signed Judge to a $684,300 contract earlier this month, though he also received a $1.8M bonus as a first round pick back in the day, plus he has lucrative endorsement deals with Pepsi and Adidas. He probably doesn’t need the money as much as the typical pre-arbitration-eligible player. “(The $1M prize will) entice a couple people … But, nah, it really doesn’t draw me in,” he said.

Giancarlo Stanton is a maybe — “I always enjoy doing it. It just depends on where I’m at in the season and how I feel. That’s the most important thing,” he said — and Brett Gardner jokingly said he’s in. Maybe Miguel Andujar or Gleyber Torres will take their hacks this year? Or Gary Sanchez again if he has a bounceback season? Having a Yankee in the event is a good thing for baseball overall.

Personally, I am pretty bummed Judge is passing on the Home Run Derby, though I totally get it. He’s won it once already, and it came with a physical toll. Every year Home Run Derby participants and All-Stars say the All-Star break doesn’t feel like an actual break because there’s so much going on. Judge is likely a perennial All-Star going forward, so skipping the Home Run Derby equals one fewer obligation.

MLB and the MLBPA jointly announced the Home Run Derby prize money has been increased to $1M this year as part of their recent sweeping rule changes. Previously the winner received a $150,000 bonus. New York last hosted the All-Star Game at Citi Field in 2013. The old Yankee Stadium hosted the All-Star Game back in 2008 and I imagine the new Yankee Stadium is in the queue for the 2020s.

The Home Run Derby is a little less exciting this year. Last year Aaron Judge stole the show and won the whole damn thing convincingly, but unfortunately he elected not to defend his title this year. A bummer — I’m not sure there’s anything in baseball I enjoy more than watching Judge hit dingers — though it’s probably for the best. The extra rest can only help.

A few years ago MLB revamped the Home Run Derby format to make things more exciting and hey, it worked. Now it’s a head-to-head bracket style tournament with a race against the clock. We’ve seen a few brackets go down to the final seconds in recent years. Here is the 2018 Home Run Derby bracket: 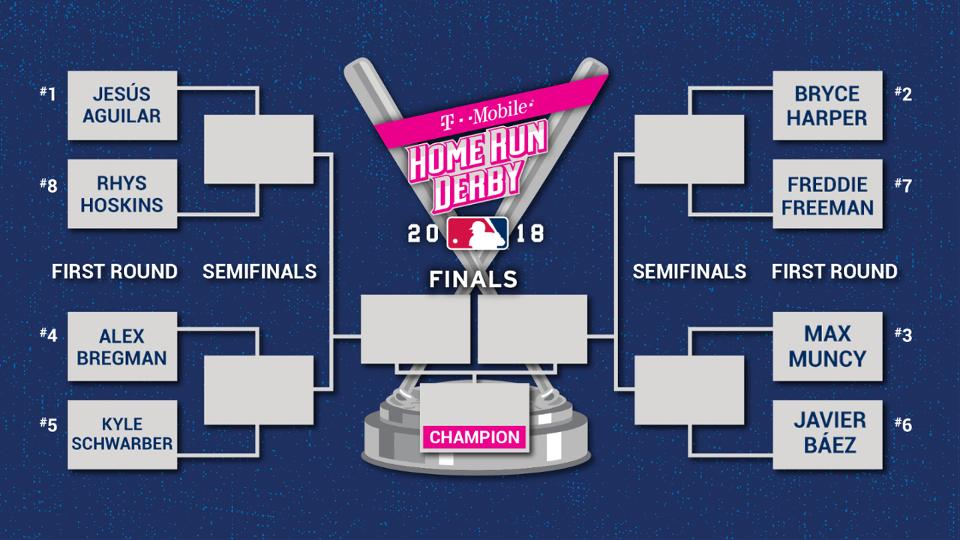 I’m going to put my money on — note: I am not actually putting money on the Home Run Derby — on Jesus Aguilar. Why? No reason, really. He socks dingers and I enjoy watching him play. Good story too. Aguilar spent a long time in the minors before finally getting a chance to prove himself in the big leagues, and he’s made the most of his opportunity.

At some point soon, likely within the next week, MLB will announce the eight participants for the 2018 Home Run Derby. The Home Run Derby itself will take place Monday, July 16th, at Nationals Park.

We know this much: Aaron Judge and Gleyber Torres will not be there. Judge has said he’s “ won and done” with the Home Run Derby and Torres says he’ll pass on the event. Gary Sanchez is hurt, so you can rule him out too. Others like Mookie Betts and J.D. Martinez have indicated they’ll pass on the Home Run Derby as well. Mike Trout’s never done it and there’s no reason to think he’ll do it this year.

What about Giancarlo Stanton? “I haven’t thought about it,” he said to Pete Caldera earlier this week. MLB typically asks players to participate two weeks before the event and Stanton said that’s when he’ll consider whether to participate. Giancarlo is a Home Run Derby veteran who won the event in 2016. Some numbers, since I know many of you out there are wondering:

I know this much: MLB is going to want a Yankee in the Home Run Derby. The Yankees are good and the Yankees are popular, and they’ll help draw eyeballs to the event. With Judge and Torres passing, and Sanchez hurt, Stanton is the team’s obvious candidate to participate in the Home Run Derby. If he passes, would they ask Didi Gregorius? Miguel Andujar? Aaron Hicks? We’ll see.

According to Ken Davidoff, Gleyber Torres said he will pass on participating in the Home Run Derby next month. It’s unknown whether MLB has invited him, but it doesn’t matter now. Torres will pass. “I’m not a home-run hitter. I’m a contact hitter,” he said.

Gleyber may not seem like the Home Run Derby type, but there are a few things to keep in mind here. One, MLB definitely wants a Yankee involved to generate buzz, and an exciting young Yankee would be preferable. Two, Torres has socked a lot of dingers lately. Here is the home run leaderboard since the day he was called up:

And three, several big names have already says they’re going to pass on the Home Run Derby this year, including Aaron Judge. Others like J.D. Martinez and Mookie Betts have said they’re unlikely to take their hacks in the Home Run Derby. Even Bryce Harper is supposed on the fence and the game is at Nationals Park.

With so many big name players passing on the Home Run Derby, MLB needs some guys fans want to see — Justin Bour and Charlie Blackmon were in the Home Run Derby last year, and no offense to them, but not many folks tuned in to see those two hit — and Torres is definitely one of those guys. Instead, he’s passing.

I’d bet the farm on at least one Yankee participating in the Home Run Derby. MLB wants a Yankee there. With Judge and Torres out, Giancarlo Stanton makes sense, especially since he’s done it a bunch of times before and won it two years ago. I suppose Gary Sanchez is a possibility too. Maybe Miguel Andujar? We’ll see. I’d bet on there being at least one Yankee sin the Home Run Derby though.

“One and done is good for me,” said Judge to Brendan Kuty, adding the decision is not final. “I’m a Home Run Derby champion. It was a cool experience. I enjoyed it all but I don’t think I really need to go out there and do it again. I won it once.”

Anyway, Judge said he’d “rather not say” whether the Home Run Derby contributed to his shoulder injury and second half slump. Earlier this spring he said the shoulder issue first popped up after crashing into the wall making a catch at some point before the All-Star break, though I suppose the Home Run Derby could’ve exacerbated things.

Also, on the podcast, Judge talked about the All-Star break not feeling like a break last season. The Yankees played Sunday, there was media day and the Home Run Derby on Monday, the All-Star Game on Tuesday, and then really only one day off before rejoining the team. I imagine that factored into Judge’s decision to skip the Home Run Derby going forward.

I am pro dingers so this news is a bummer to me. I was hoping to at least see Judge defend his title this season. Then again, the Yankees have two other Home Run Derby candidates on the roster, maybe four if Greg Bird stays healthy, so no Judge probably won’t be a big deal. Still would’ve been fun to see the big guy take his hacks again though.

Monday night at Miami, Aaron Judge stole the show and won the 2017 Home Run Derby. He beat Justin Bour 23-22 in the first round, Cody Bellinger 13-12 in the second round, and Miguel Sano 11-10 in the third round. Judge was on another level. The last two rounds were actually anticlimactic.

The first round matchup with Bour was the highlight of the night. The hometown Marlin clubbed an incredible 22 home runs and had the crowd going nuts. Judge came back to hit 23 with time to spare. It was amazing. Bour had an amazing and fun round, and Judge knocked him right out.

In the second round Judge socked home runs measuring 504, 507, and 513 feet. He also hit one off the Marlins Park roof that didn’t count, so he really socked 24 against Bour. Judge also went opposite field into the second deck a few times, where the lefty power guys were hitting bombs. It was insane. Here’s some video:

Judge is the fourth Yankee to win the Home Run Derby, joining Tino Martinez (1999), Jason Giambi (2003), and Robinson Cano (2011). His 47 home runs are a Yankees record for the Home Run Derby. He could have topped Stanton’s record of 61 homers had they allowed him to hit until time expires. (As the higher seed, his round ended as soon as he topped his opponent’s total.) 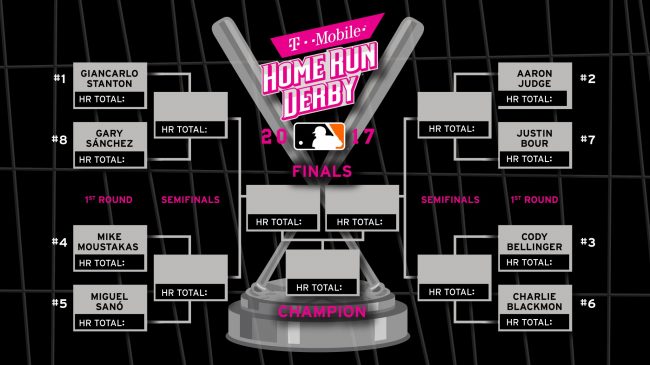