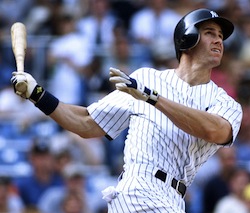 It’s hard to believe that 2009 marked the first time since Paul O’Neill patrolled right field that the Yanks won a World Series. Since the era of O’Neill, the Yanks tried a variety of players in right. Raul Mondesi got his crack, and Gary Sheffield and Bobby Abreu held down the three-hole in the lineup for a few years. Now, the spot is Nick Swisher’s for the foreseeable future, and we fondly remember O’Neill.

It wasn’t always like that though. When Paul O’Neill first arrived in the Bronx, fans and commentators responded skeptically. He was some overhyped 29-year-old from Cincinnati who was more known for his temper than for his bat. He could never hit as well as he was supposed to, and the Yanks gave up a one-time untouchable player to get him.

The trade come down on November 3, 1992. The Yankees, a few weeks removed from a fourth place, 76-86 finish, were looking for a big lefty bat, and the team needed some pitching too. So they traded Roberto Kelly for Paul O’Neill. At the time, media coverage focused around what the Yanks gave up rather than what they got back. “The Yankees,” Jack Curry wrote, “scrapped their glorious plans involving Roberto Kelly yesterday and traded their once-untouchable outfielder to the Cincinnati Reds for power-hitting right fielder Paul O’Neill.” Kelly was “someone they would not trade because of his potential to be their next superstar.”

In O’Neill, the Yanks had potential, but Murray Chass wondered if they had anything else. Chass saw the troubles and the way Steinbrenner would grate on O’Neill. He didn’t know if the temperamental lefty could survive the wrath of the Boss after suffering through Lou Piniella while with the Reds.

Meanwhile, with Paul in the fold, speculation about the Yanks’ impending moves grew louder and louder. Curry wondered if the team would pursue Barry Bonds, and David Cone, Jim Abbott and Greg Swindell were rumored to be on the team’s wishlist as well. My, how times have changed.

In the end, the Yanks were the clear winners of that trade. O’Neill played 1254 games in the Bronx over the next nine years, and his arrival signaled the start of a smarter approach to team-building. Playing next to Bernie Williams and hitting in front of him, O’Neill went on to put up a .303/.377/.492 with 185 home runs in the Bronx, and outside of an ill-fated two-week stint by LaTroy Hawkins, no one has worn 21 since he did. As for Roberto Kelly, he wasn’t as lucky. The one-time future superstar played just 699 over the last few years of his career and hit .299/.342/.446. He retired after a short return to the Bronx in 2000 and now serves as the first base coach for the Giants.

In 1992, the Yankees took a chance on a 29-year-old, and only the water coolers lived to regret it.

At the beginning of May, Foley’s, the excellent baseball-themed Irish pub, announced fan voting for its Irish American Baseball Hall of Fame, and I asked RAB readers to vote for Yankee Warrior™ Paul O’Neill. Earlier this week, Foley’s announced the winner, and O’Neill it is. The longtime Yankee right fielder and current announcer will be inducted into the Hall on Tuesday, July 7. Good stuff. Hopefully, we’ll do a RAB meet-up at Foley’s some time this summer.

Last year, Foley’s, the excellent sports bar with a huge autographed baseball collection on 33rd St. between 5th and 6th Aves., unveiled its Irish Baseball Hall of Fame. While Yankee great announcer John Flaherty earned an induction into the first class, the bar fielded numerous complaints from fans who wanted to get involved. Today, Foley’s introduced fan voting for the 2009 inductee. Adam Dunn, Al Leiter, Paul O’Neill, Joe McEwing and Nolan Ryan make up the field. I voted for Paul O’Neill. All of those fans who got so defensive over LaTroy Hawkins’ number flap last year should do the same.

For days and days and days, we’ve debated the LaTroy Hawkins Number Fiasco. It seems clear to me that Yankee fan opinion is firmly divided on the fate of Paul O’Neill’s 21. So submitted for your approval — and since we haven’t done one of these in a while — a poll. Play nicely with each other in the comments if you wish to continue the debate.

In a rather amusing piece on The Times’ Bats blog, Jack Curry details how he broke the uniform news to Paul O’Neill. When told that someone new would be wearing 21, Paul handled himself quite diplomatically. He ran into the dugout and chucked his bat, batting gloves, helmet and the Gatorade cooler onto the field. Wait. Just kidding. In reality, he cautioned against expecting one’s number to be retired. “You don’t ever take anything like that for granted,” he said.

While the official list of non-roster invitees doesn’t reflect the latest news, PeteAbe notes that Morgan Ensberg will get the long-dormant number 21. I always thought the Yanks would retire O’Neill’s number, and Mike and I wonder if Ensberg would hear boos for daring to wear it. The only numbers not assigned to players in camp this year are 6, 51, 69, 98 and 99. Two of those are sure to be retired, and one is just plain funny.