River Ave. Blues » Save Hughes. Save Joba. Save IPK. Save The Future
In the aftermath of the Garza-Young deal
Unreliable source: Sox frontrunners for Johan 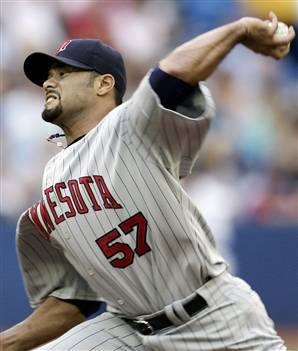 Yesterday, we made our position clear: Save The Big Three. This was met with varying responses, most of which disagreed to one extent or another. It seems that most Yanks fans — surprise surprise — would like to see Johan Santana in pinstripes. Hell, count me among ’em. My problem is that I don’t want to see the Yankees dish any of the Big Three to get him, in which case a deal wouldn’t happen.

Now, before anyone else says, “You’d be an idiot not to trade IPK for Santana,” let’s be clear about something. A package centered around Ian Patrick Kennedy will not land Johan Santana. Period. Maybe before yesterday, when Matt Garza was still a Twin, there was an inkling of a chance the Yanks could pull off such a deal. Any chance that existed (probably none) is now gone. If the Yanks want Santana, it’s going to cost Joba or Hughes. If IPK is in the deal, it will be in addition to one of those two. This is why we need to save IPK.

When asked to choose which of the other two to dish, it appears the consensus is Hughes. I get that. The only knock on Joba before the season was his injury risk, but after he showed up to camp a bit lighter and after having a relatively healthy season (except when he caught the hamstring strain bug from Wang), he has quelled some of those concerns. At least relatively speaking, as we found out that Hughes, the invincible No. 1 pitching prospect in the game headed into the season (I’m not counting Dice-K), is also susceptible to injuries. Who knew?

So we’re talking Hughes and more for Santana. Jutting off on a tangent for a second, I would think that the Twins, given their recent transaction, would be looking for Horne and Austin Jackson, at least. With the acquisition of Jason Pridie, the immediate need for a center fielder is lessened. He’s not a world beater, but he can fill in adequately while the Twins wait on someone like Ajax. The Twins could still have interest in Melky, but I think that given the situation, we can leave him out of the conversation until we hear otherwise. And who knows: Maybe they want Tabata in the deal, too, instead of Horne — or on top of Horne. That changes the story, but for now let’s stick to Phil and Johan.

A message I’ve been trying to spread for the past few days is that extension or not, we would be trading for just one year of Santana. Yes, a trade would be contingent upon an agreement on an extension being reached, but it is still a separate entity. It’s what the Yankees would be paying for Santana, in theory, if he signed with them as a free agent after the 2008 season.

In essence, then, the players involved in the deal act as a twofold bribe to the Twins. First, the payment of prospects keeps Santana out of the hands of other teams. Second, it buys one year of contractual service. That’s it.

So is Phil Hughes and (Jose Tabata and/or Austin Jackson) and possibly Alan Horne and/or Melky worth keeping Santana out of the hands of other teams and receiving one year of his service?

I guess it depends on how you value Johan Santana. You can say “he’s the best pitcher in baseball” all day, and I’d probably bet on you in a shouting match. But nothing is that simple. If we knew that Johan would continue to be the best pitcher in baseball for the next five years, I’d even consider trading Joba. But we don’t (so I wouldn’t). And when you look at it, history doesn’t side with Santana.

As Jack Curry notes in his column for the Times yesterday, only three pitchers in history have been given deals exceeding $100 million: Kevin Brown, Mike Hampton, and Barry Zito. How, exactly did those work out — or for the last two, how are those deals working out — for the respective teams? We caught the last two years of the Brown deal, and they were a rarely-mitigated disaster. Hampton hasn’t pitched a goddamn competitive inning in the past two years, and mustered just 69.1 IP in 2005. He hasn’t pitched over 200 innings since the first year after the Rockies gave him that ludicrous contract. And he was terrible in that season, posting a 5.41 ERA (though league average was an enormous 5.32, thanks mostly to Barry Bonds). Zito didn’t deserve the deal in the first place, and posted a below-average ERA in the very first year of the deal.

This doesn’t mean that Santana will suffer the same fate, but it proves that the risk is there, and so far it’s 3-for-3 in favor of the bad guys.

Also, let us not forget the Mark Mulder trade, which might be the most apt comparison. Of course, Mulder wasn’t as dominant as Johan, but he posted an above-average ERA in every year from 2001 through 2004, many of those years well above average. But then in 2004 he showed signs of decline. His walk and home run rates rose, while his strikeouts dipped. He was dished after the season, and after one solid campaign with the Cardinals, the wheels fell off. He pitched just 93.1 wholly ineffective innings in 2006 — to the tune of a 7.14 ERA — before being injured, and pitched only 11 meaningless innings at the end of 2007, allowing 15 earned runs (4 gopher balls), walking seven and striking out just three.

Thankfully, strikeouts, walks, and home runs aren’t a huge concern for Santana. His strikeout rate actually rose from 06 to 07. His walk rate rose, but not to near a level of concern. And while his home rate spiked dramatically, 24 of his 33 homers allowed were of the one-run variety.

This isn’t to say that signs of decline are absent. In fact, as we’ve noted previously, his AVG/OBP/SLG numbers have increased from year-to-year since 2004.

Though, once again, the 24 solo shots factored a lot into the .405 slugging percentage.

So while we’re not seeing decline in the same places, per se, that we saw them in Mulder, the evidence is there, no matter how small it may be. Now we have Hampton, Brown, Zito, and Mulder as reasons the Yanks shouldn’t do it.

But for all the negative comparisons, there has to be a positive one out there, right? How about Pedro Martinez? The Red Sox traded Carl Pavano and Tony Armas Jr. for him after the 1997 season, and it worked out marvelously. In fact, you can make an apt comparison between Pavano and Hughes.

Both were among the top pitching prospects in the game heading into their respective age 21 seasons. Both had solid minor league careers to that point, though Hughes struck out a ton more batters. Hughes also reached the bigs in his age 21 season, while Pavano spent it all in the minors.

Armas was a lesser-known quantity, having just finished his age-19 season — one he began in the Yankees organization — after 1997. He had a quality but brief track record in the Yanks farm system and his brief stint in Boston’s.

This brings us right back to the beginning. If I knew that Johan would pitch as well for the Yanks as Pedro did for the Sox, I wouldn’t be writing this right now. But what if he ends up like Kevin Brown, with two and a half dominant years, a solid year, and a bunch of time on the DL and serving up homers? Is it worth it then? Remember, too, that he could end up like Mike Hampton and need a cane to walk by the age of 32.

Just remember, when you’re saying that you should always trade prospects for established talent, and especially if it’s for the best pitcher in the game, there are two sides to the risk coin. By holding onto Hughes, the Yanks risk him going bust, and they’ll have lost out on the best pitcher in the game in the process. But by trading for Santana, the Yankees incur even more risk. They risk injury or general ineffectiveness from Johan (remember Sandy Koufax, too, for an example of a great career ending early) — and the stakes aren’t small at $163 million. They also risk trading away players who eventually trump Santana in value. Believe it or not, if both Hughes and Ajax pan out (no guarantees, of course), they together could be more valuable than Johan Santana.

I’m coming down on the side of keeping the prospects. Not for fear of making a bad move, but for the incredible risk involved. If we were talking just prospects and not $163 million, we might be having a dialogue. Same if we were talking money and not prospects. But when we’re talking both, I’m walking away.

In the aftermath of the Garza-Young deal
Unreliable source: Sox frontrunners for Johan