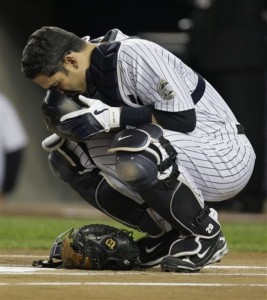 Last week I linked to a THT article looking at the difference in pitch selection between Jorge Posada and Jose Molina whenever CC Sabathia was on the mound last year, but I wanted to see if I could dig a little deeper into this debate. I don’t claim to be any sort of statistics whiz, but I definitely know my way around a slide rule. Frankly, I’m sort of embarrassed to be posting this because I’m not 100% confident in it’s accuracy, but whatever.

Over the last three years, opponents have hit .268-.343-.420 off Yankee pitchers when Posada was behind the plate (9,345 plate appearances), compared to .248-.309-.381 when Molina caught (5,285 plate appearances). There’s no denying that’s a pretty drastic difference, and I went back far enough – Molina’s entire time in pinstripes, actually – to ensure that sample size wasn’t an issue.

Using Dave Pinto’s Lineup Analysis Tool, we know that a lineup of nine hitters with a .343 OBP and a .420 SLG would score 4.896 runs per game, while a lineup of nine .309 OBP and .381 SLG batters would score 3.915 runs per game. We’re going to normalize everything over 120 games in this post, because that’s how about how many games you’d expect your number one catcher to play in a given season. So, over 120 games, opponents would have scored 587.52 runs when Posada was catching, and 469.80 runs when Molina was behind the plate. Big difference.

American League pitchers have allowed 2,310 runs per 486 games over the last three seasons, or 570.37 over 120 games. That means Posada’s “game calling” was worth 17.15 runs below average during that time, while Molina’s was worth 100.57 runs above average. I put game calling in quotes because it’s a vague term and there are a million variables involved. In the end, it’s up to the pitcher to execute, but for our purposes we’ll hoist all of the blame/praise onto the catcher.

Okay, so right now we’re saying that Posada’s game calling is worth -17.15 runs above average while Molina’s is worth +100.57. Let’s come up with a fancy acronym for this … how about GCRAA, or Game Calling Runs Above Average? Works for me.

At Beyond The Box Score today, Dan Turkenkopf posted last year’s catcher blocking percentages, which tells you how many runs a catcher saved or cost his team with his ability to hande balls in the dirt. You can click on the link for a more detailed explanation, but Posada’s and Molina’s blocking ability was worth 4.66 and 4.30 runs below average, respectively. Those totals are already normalized to 120 games, so that’s nice and easy.

I don’t think anyone would have argued that Molina’s defense and ability to handle pitchers was better than Posada’s, however that’s just part of the equation. During the last three seasons, FanGraphs says that Posada’s offense has been worth 62.5 runs above average in 1,222 plate apperances while Molina’s has been worth a whopping 26.2 runs below average in 523 plate appearances. Normalizing both to 500 plate appearances (approximately 120 games worth), Posada’s offense is worth 25.57 runs above average, Molina’s 25.05 runs below average.

The last piece of our catching debate pie is baserunning. Since FanGraphs considers stolen bases and caught stealings in their wOBA calculation, which is in turn used to determine wRAA, we don’t need to worry about them. Instead, we can use the same EqBRR-EqSBR calculation I presented here and here to determine how each player’s non-stolen base baserunning effected the team. Over that same three year time period, Posada’s baserunning cost the team a staggering 16.81 runs while Molina’s cost them just 0.13. Such are the benefits of hitting at the bottom of the lineup I suppose, no one behind you is ripping extra base hits requiring more than station to station baseball. Normalizing both to 500 plate appearances, we get 6.88 runs below average for Posada and 0.12 runs below average for Molina.

Catcher defense is practically impossible to quantify, so I’m not even going to bother trying to figure it out. Let’s just assume it’s included in our GCRAA and Turkenkopf’s block pecentage stats, which give Molina a humongous advantage anyway. Alright, let’s sum it all up:

So based on everything we did above, Jorge Posada playing full time is essentially a league average player because his inability to handle pitchers and awful baserunning negates his offense. Molina, meanwhile, would have resulted in an extra 71 runs assuming equal playing time, or basically seven wins. It’s a big difference, basically the difference between Derek Jeter and Ramiro Pena last season.

Obviously, you shouldn’t consider this to be any sort of definitive proof that Molina’s ability to work with pitchers is so superior to Posada’s that it would have been worth playing him every day despite the difference in their bats. Remember, I didn’t adjust the GCRAA for league are anything like that, I just hammered out an old school back of the envelope calculation, if you know what I mean. There is certainly evidence that pitchers get better results with Molina behind the dish, I never denied that, but I’m still not convinced it’s enough to make up for the difference in offense despite everything above. I just can’t see Molina being a friggin’ seven win player because of his game calling; there has to be a way to improve GCRAA.

Maybe one of these days someone a whole lot smarter than me will take a stab at this. Mo knows we’ll deal with it again next year with Frankie Cervelli.